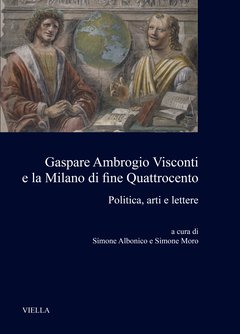 Gaspare Ambrogio Visconti’s poem De Paulo e Daria amanti is famous among historians especially for some of his verses on the subject of factions. The essay aims to illustrate the specific position taken by the poet in this regard, placing it within a broad reconstruction of what it meant in Milan to belong to the ghibelline party (14th-15th centuries). This sheds light on the debate that throughout the whole Visconti-Sforza period most deeply divided Milanese society – the debate about the nature of the ducal power and the way in which it was to be exercised.

Was there a general agreement, in spite of deep socio-political differences, about the proper qualities of a good prince in late fifteenth century Milan? To answer this question, some clues can be gathered from diplomatic correspondence in times of crisis, as well as from the writings of ghibelline partisans, such as Donato Bossi, Giovanni Pietro Cagnola, Bernardino Corio, and Gaspare Ambrogio Visconti. Rather than on magnificence and international relations, pillars of Ludovico il Moro’s self-legitimation, in such sources the emphasis was laid instead on fides and humanitas. Such virtues were mentioned in humanistic treatises as well as in Sforza’s propaganda. They were also evoked in the citizens’ claims to the prince. In the latter, however, such appeals seemed rooted in a more radical contractualism.

Bramante’s Milanese activity is retraced with particular attention to the relationship that linked the master to some patrons, Ludovico Sforza and Gaspare Ambrogio Visconti. Bramante was the architect to whom the duke committed the realization of his most innovative projects, intended for the renewal of cities or aimed at enhancing private magnificence. With the poet, who hosted him for many years, Bramante maintained a closer and more complex relationship nourished by esteem and cultural interests, which was not limited to artistic patronage.

The paper investigates the personality of Gaspare Ambrogio Visconti as a patron. In particular, it tries to reconstruct the history and the original appeareance of the Visconti’s villa, the so-called “Cascina Bianca” near Milan, destroyed in 2000 after years of neglect. The villa is mentioned by the poet himself, by Antonietto Fregoso and by Matteo Bandello in their writings. Its history is reconstructed on the basis of the ancient documentation, of two typewritten reports drawn up by the architect Andrea Fermini in the 1940s, finally of some images that portray the villa before the collapse. What emerges is the profile of a very particular building, characterized by unusual architectural solutions and by a set of fresco paintings very close to the decorations of the Castle of Vigevano, made by Bramante and his workshop during the 1490s.

Between 1495 and 1496 Gaspare Ambrogio Visconti offered Ludovico Sforza and Beatrice d’Este two manuscripts containing the poem De Paulo e Daria amanti and the collection of Rime. The two codes represent an innovation for Milan: the first adopts the illuminated architectural frontispiece of Venetian origin, the second the purple parchment.  The essay identifies the models that inspired Visconti in Venetian humanistic manuscripts and in a Book of Hours illuminated by Belbello da Pavia.

The cultural contacts between Mantua and Milan in the age of Gaspare Ambrogio Visconti have not been systematically studied yet. Some hints are given here as a starting point for new researches, beginning with a short biography of Leonardo Becci, better known as Aristeo, whose famous letter to Gaspare Ambrogio stresses the importance of Tuscan language as a model for northern Italian poetry. New documents also reveal an interesting part of his library: Dante, Petrarca, Boccaccio, Giovanni Simonetta translated by Cristoforo Landino, Leonardo Bruni translated by Donato Acciaioli, and Bernardo Bellincioni. From a more general perspective, as Lancino Curti’s Latin verses show, the University of Pavia was a relevant crossroads for Milanese and Mantuan men of letters (Battista Fiera, Battista Spagnoli, and Sinfoniano Grignano).

Two codices are examined in this paper, the Italian Ms. 1543 of the Bibliothèque Nationale de France in Paris and the Sessoriano Ms. 413 of the Biblioteca Nazionale Centrale in Rome. It has been confirmed that they were commissioned by Gaspare Visconti, who had them prepared in rapid succession, between 1492 and 1496. Gaspare saw to the transcription of anything new and notable that came into his possession – whether the work of high-flown or almost unknown authors from Milan, Lombardy or elsewhere in the Italian peninsula. The manuscripts contain Latin, Tuscan and vernacular texts, written in prose or verse and concerning poetical, literary, theatrical, historical, annalistic and fictional matters. Such variety shows Gaspare’s breadth of interests, while the uniqueness which characterizes many of them from a philological and historical-critical point of view makes his cultural operation even more noteworthy.

The paper is a reading of the two poems by Fregoso, with a particular focus on their connections to Marsilio Ficino’s epistulae De stultitia and miseria hominum and their translation in Italian in the Sermoni morali. The poems, dedicated to the laughing of Democritus and the weeping of Heraclitus over human folly, are considered on the background of Milan historical and cultural environment between fifteenth and sixteenth century. Particular attention is paid to the fresco by Donato Bramante with the same subject, now kept in Brera, whose client had been Gaspare Ambrogio Visconti. The meaning of the poem Li doi philosophi (which is dedicated to Gioffredo Caroli) can also be indicated in a reproposal of the cultural reflections of the “Visconti circle” to the new French rulers, in view of a renewed civil harmony.

The essay focuses on Gaspare Ambrogio’s first canzoniere, called Rithimi (1493), and analyses its textual history, its macrotextual structure and its relationship with other models. If Petrarch remains a beloved starting point, Visconti’s writings show contacts with many other authors, both ancient and modern, both Latin and vulgar, both on the microtextual and macrotextual level. A final comparison with the second canzoniere dedicated to Beatrice d’Este (ca. 1495-1496) allows to mark the difference between the two works of the author and specify the general characteristics of his lyrical production.

The chapter focuses on the «brevi declarationi» (short prose explanations) that accompany some of the poems in Visconti’s Rithimi (1493). On the one hand, their function is mainly informative and explanatory, as suggested by the author himself in the dedicatory letter; on the other, some of their features and effects seem to have wider implications both on the microtextual and macrotextual level. The analysis moves from a close description of the «declarationi», also in the light of other incunables and the Petrarch commentary tradition, to the drafting of a typology, which provides the framework for the discussion of specific interactions between text and paratext. For the longest «declarationi», which tend to develop a narrative, a comparison is proposed with the novella and the prosimetrum.

The article highlights the memory of Matteo Maria Boiardo’s Amorum libri tres in Gaspare Ambrogio Visconti’s lyrical production, and in particular in his Rithimi, showing how Boiardo is treated as an authoritative model, even if to a degree not comparable to Petrarca and Giusto de’ Conti. Different kinds of literary debts are identified: from those of a more properly interdiscursive nature to those that expose in the incipit the memory of Boiardo to those that have possible structural implications. It is also shown how contacts with the Amorum libri are sometimes part of a relationship with other authors, which could also include a vast anonymous collection of the Este area, the so-called Canzoniere Costabili.

The paper proposes to place the poem in the genre of the novel and tries to examine some qualifying aspects of its original mixture of genres: the relationship between the figure of the narrator and that of the author, the function of the marginalia, the structure of the text and the meaning of the metric choice (which recalls Boccaccio but proposes a daring experimentation), the layout and the choices of the narrative and some of the relationships with tradition, the historical meaning and the function of the work in brief comparison with what happened in other centres of the penisola at the end of the fifteenth century.

This contribution aims to provide a reading of Milanese society at the end of the fifteenth century, starting from the literary works of the aristocratic poet Gaspare Ambrogio Visconti. In the rereading of Visconti’s poems particular attention is paid to what the poet censors or re-elaborates of family memory and Milanese recent history. In order to achieve this goal, are presented here the partial results of a demanding ongoing research on Visconti’s documentation. The result is a partially unprecedented picture of Milanese society. Completely innovative is the reading of the religious anxieties that cross the city. Milan thus finally enters, together with other Renaissance European capitals, into a general discussion on the ways to reach salvation, which is a prelude to the broader polemics of the sixteenth century.

The paper presents a brief anonymous collection from the Milan area, dating back to the end of the fifteenth and the beginning of the sixteenth century. The code handwriting belongs to the famous copyist Giovanni Battista Lorenzi; concerning the miniature presented at c. 1r, we hypothesize that it has been composed by an artist known as Maestro dell’Antifonario D.R.1 from Busto Arsizio. The analysis of the macrotext helps to identify the project pursued by the author, who, far from casually positioning his compositions, organizes the collection as a real canzoniere. The comparison of some of the author’s compositions with the Petrarchan model, but also with Giusto de’ Conti, reveals the eclectic nature of the fifteenth century Petrarchism, to which this canzoniere should be returned.

The paper analyses the anonymous canzoniere contained in ms. 174 of the Alessandrina Library in Rome and dedicated to Milanese gentlewoman Elisabetta Colli, illustrating its thematic, metrical, rhetorical characteristics, and suggesting a Northern Italy location of its author.

Paolo Bongrani’s Conclusions at first briefly retrace Visconti’s critical fortune and the many reasons that placed him at the center of the literary and cultural life of Milan in the late fifteenth century; then the reports presented at the Conference (historical, historical-artistic and literary) are briefly examined, highlighting the main novelties for each one, both on a methodological and critical level as well as on that of the discovery of new texts.

The presentation opens with a look on the scientific production of the Pavia school of Italian Philology, to which Bongrani’s edition belongs (along with other important volumes). The handwritten tradition of the Canzonieri and the publisher’s ecdotic choices are illustrated below. Finally we move on to the reading of this poem and emphasize its didactic and “occasional” rather than regular Petrarchian character; and we discover in one of the final sonnets of the collection a reprise from Persio, which represents an explicit declaration of belonging to a genre.