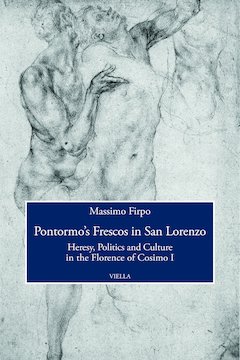 Heresy, Politics and Culture in the Florence of Cosimo I

In the choir of the Basilica of San Lorenzo, a truly sacred temple of the Medici dynasty, Pontormo painted a grandiose cycle of frescos between 1545 and 1556, which were then unfortunately destroyed in the mid-18th century. Far earlier, Giorgio Vasari issued a severe judgment on them that lasted into the modern day. His was a dismissal motivated formally by artistic reasons, but it concealed other, more insidious, ideological and religious motivations.

On the basis of drawings, copies, paintings and literary sources, this study reconstructs the design and arrangement of the frescoes, revealing them to have been inspired by a contemporary heterodox text, one that was included in the Index in 1549.

From a dense web of Florentine religious, cultural and political life and its shifts in the middle decades of the century, the political motivations underlying Vasari's commitment to transforming the doctrinal heresy from which those grandiose paintings had drawn inspiration into an artistic heresy emerge. It was a commitment that, after the conclusion of the Council of Trent, risked reflecting upon the new Counter-Reformist structure of Medici power.

Massimo Firpo, a member of the Accademia dei Lincei, has taught Modern History at the Universities of Cagliari and Turin and finally at the Scuola Normale in Pisa. His research has focused above all on religious life in the 16th century, with a particular emphasis on heterodox and radical movements.