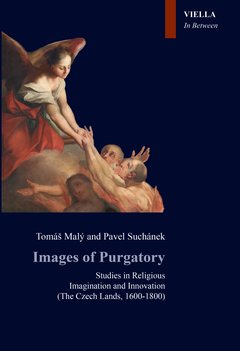 Studies in Religious Imagination and Innovation
(The Czech Lands, 1600-1800)

On the example of the Czech lands, the book discusses the transformation of the representation of Purgatory in the period between the late Reformation debates at the end of the sixteenth century and partial rejection of Purgatory by the so-called reform Catholicism of the late eighteenth century. The authors, moving permanently in-between history and art history, gradually analyse theology, iconography, practice, and reception of Purgatory. They address the questions of space and time in Purgatory, of emotions and the early modern "affects", treatment of images in religious practice, circulation and diffusion of meditative texts and images, or the problem of revenant souls.

The book offers a comprehensive consideration of the development of a fascinating cultural phenomenon in a crucial period of significant changes in people’s thoughts and behaviour.

Cover: Ignaz Stern, Nicholas of Tolentino as a patron saint of souls in Purgatory, 1739. Prague, the Augustinian church of St Catherine in New Town of Prague (Institute of Art History, Czech Academy of Sciences – Martin Mádl).

Tomáš Malý is an associate professor of History at Masaryk University, Brno. Both in pedagogical and research work, he addresses the religious and cultural history of early modern Central Europe. He has published books and studies on Baroque piety, religious imagination, and secularization.

Pavel Suchánek is an associate professor of Art History at Masaryk University, Brno. His area of expertise is the early modern visual culture in Central Europe. He has published books and articles on Baroque art and culture, religious imagination, artistic patronage, the visual culture of the Enlightenment, and other topics.