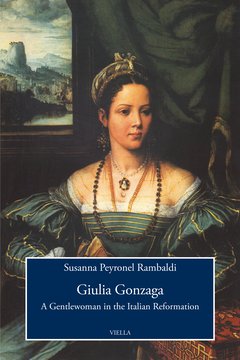 A Gentlewoman in the Italian Reformation

The life of Giulia Gonzaga – a leading figure in a delicate time of transition in 16th-century Italian political, cultural and religious history – brings this period and its dramatic turning-points alive. A favoured disciple of Juan de Valdés and at the centre of his group of followers, as well as a loyal friend of the protonotary Pietro Carnesecchi, who was condemned for heresy and executed, Giulia Gonzaga was strongly tied to her class, her powerful dynasty and to family and political intrigues. Under the shadow of her family, she enjoyed a heterodox experience shared by many others, men and women alike, who were protagonists of an intellectual and spiritual dissent that was harshly repressed by the Church of Rome.

Through the life of a woman, this book recounts the shifts in the political balance of power in Italy in the early years of Spanish dominion and how they mixed with religious dissent and with attempts to change the direction of the Church. It also recounts the relationships, friendships and solidarities of an aristocracy, male and female, that sought to play a role in the bitter conflicts that had emerged in Italian society as the Reformation spread throughout Europe.

Susanna Peyronel Rambaldi lectured in Modern History and History of the Reformation and Counter-Reformation at Milan University. She focused mainly on political-religious history in the 16th and 17th centuries, the history of the Italian Reformation, the history of the Inquisition in Italy, and, more recently, the political and religious activity of the ladies of the great Italian family courts. Her previous works include a volume she edited together with Letizia Arcangeli, Donne di potere nel Rinascimento (Viella, 2008) and the original Italian edition of this book, Una gentildonna irrequieta. Giulia Gonzaga fra relazioni familiari e relazioni eterodosse (Viella, 2012).