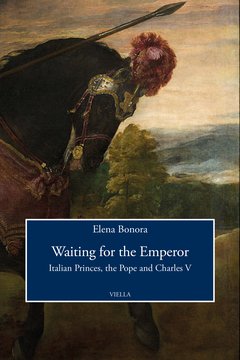 Waiting for the Emperor

In the 1540s, Italian princes, lords and cardinals wrote to each other using a secret, highly imaginative language. They were waiting for Emperor Charles V to descend on Italy to cut the papacy and Papal States down to size once and for all. Their letters, which have never before been used by historians, were not literary fantasies; behind the fictitious names, metaphors and the ferocious satire against Pope Paul III, there were weapons, money and power. For years, against the background of the battle between the two giants – the pope and the emperor – the courts of Mantua, Florence, Milan and Ferrara pursued a grand plan of containing the pope’s power by allying with men of Charles V.

This history of Italy differs greatly from the one we are usually taught. The epoch-making conflict between the ‘Italy of the Emperor’ and the ‘Italy of the Pope’ was not merely political: it was mixed with religious problems, it developed in the sphere of communication, and it left traces in Italian cultural life, on the frescoed walls of palaces and in the pages of books. But the daring project drawn up by the Italian princes in the shade of the imperial eagle failed, and failed forever, as the Counter-Reformation advanced and the sun began to set on the Europe of Charles V.