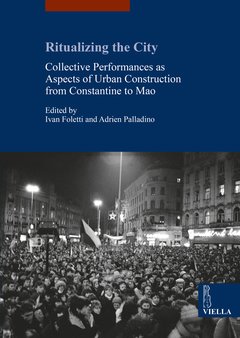 Collective Performances as Aspects of Urban Construction from Constantine to Mao

The city has always been, and remains, the ideal place of collective rituality. It is the city that has hosted, since Antiquity, collective celebrations of victory, important religious ceremonies, but also ritual consecrations of the elite. Based on these essential notions, the aim of this book is to reflect on a specific issue: the interaction between ritual and city space. Our wish is to understand, in a multidisciplinary and cross-epochal approach, how a collective liturgy, civic or religious, can unfold within the public space and transform it. In addition to sacred buildings and seizures of power, the square and the streets become in this sense important identity-shaping loci. Bringing places of power to the street or the square – which are by definition liminal spaces – means entering into a dialogue constructed between those who organise the ritual, those who perform it and those who witness it. It seems that it is in compromise between the different components of society that collective rituals can happen within the public space. Therefore, it is no surprise that the crucial question for this book is the way in which this same space is adapted to the requirements of the ritual, or, on the contrary, how the ritual adapts to the space.