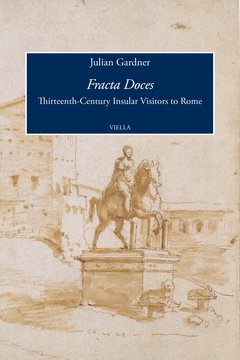 During the period between circa 1190 and circa 1230, Rome was visited by four remarkable men from the British Isles, all of whom left lively written accounts of what they saw and experienced. Gerald of Wales, Gervase of Tilbury and Thomas of Marlborough are all readily identifiable, and the purposes of their visits reasonably clear. For these men the papal Curia was their main focus and the brilliant personality of its central figure, Pope Innocent III, is vividly portrayed from differing viewpoints. The fourth visitor, identified only as Master Gregory, is the most enigmatic of the group, and it is he who writes the most penetrating descriptions of the ancient monuments which he observed. We know virtually nothing about him, the purpose of his visit is unknown, and its date is less easily established. Ancient monuments fascinated Gregory, whilst the great Roman churches are, in contrast, summarily treated.

The contemporary city these men encountered is described and the success or failure of their visits assessed. Early thirteenth-century Rome is brought vibrantly to life and the astonishing enthusiasm for Egyptian antiquities which marked both Roman sculpture and architecture of this period is reconsidered in the light of our visitors' comments.

Julian Gardner is Emeritus Professor of the History of Art at Warwick University. He has also taught at the Universities of Berkeley and Harvard. He was a visiting professor at Villa I Tatti, the Harvard University Centre for Renaissance Studies in Settignano, and Samuel H. Kress Professor at the National Gallery of Art in Washington. He has published widely on mediaeval Italian art and architecture.