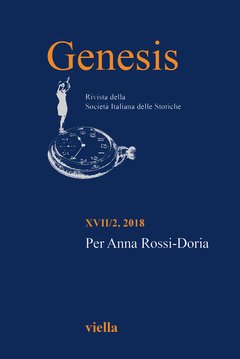 Anna Rossi-Doria was an important and authoritative Italian historian, who first concerned herself with the peasant movements of Southern Italy, then for a long time with the history of suffragist and feminist movements, and finally with the Holocaust and the recollections of deported women. This issue collects essays by scholars of different generations that go through her entire historiographical path, focusing on the peculiarities of her reflections: what she always regarded as the very close link between feminism and women’s history; the great attention she paid to «giving a voice to the silence» of those who were excluded (peasants, women, the deportees to concentration camps); the possibility of harmonizing the specificity of women’s rights with universal rights; overcoming the rigid opposition between history and memory.

The essay analyses the route that led the young Anna Rossi-Doria (originally a historian of the Southern Italian peasant world) to become interested in women’s history (conceived as feminist history) in the 19th and 20th centuries. The focus is on her historical research method, taking stock of her theoretical and practical experiences during her passionate participation in the feminist movement of the 1970s. Her interventions and writings of the 1980s and 1990s stem from a questioning of history based on some crucial conceptual dualities – universal/particular, equality/difference, history/memory –, which are intended not as opposing couples, but as ambivalences in which each term defines and enriches the other. At the end, the essay emphasizes the importance of this approach both on her studies on the Shoah experience and memory and on the problems related to the issue of “universal rights”, respecting the rights of minorities.

This article addresses the Italian feminist movement of the 1970s and its historiography from the perspective of its witness and researcher, Anna Rossi-Doria. In the first part, the essay investigates the Italian feminist movement in the late 1970s and its transformation in the subsequent decade. During this transition, the Italian Women’s Liberation Movement – which until then had displayed a strictly political character – emerged as a prominent cultural phenomenon, leading to the institutionalization of feminist studies in the 1990s. The second section concerns the recent historiographical debate on neo-feminism, with a focus on Anna Rossi-Doria’s cultural and political awareness and on the legacy of her research methods.

The article deals with Anna Rossi-Doria’s essays on women’s rights and human rights and her reflection on the nexus between “universality” and “particularity” as a central issue in women’s history. Specifically, the focus is on the women’s movement agency, on the changes in perspective promoted by contemporary feminisms and on the question of the relationship between difference and differences. Finally, it is shown how recent historiography has highlighted the hypothesis of a new women’s and gender political history at a transnational level, to which Anna Rossi-Doria’s essays have made a fundamental contribution.

This article aims to analyze the long and non-linear path of Women’s and Gender History, using the author’s subjective and generational point of view. Furthermore, it intends to highlight the dis/continuities between Women’s History and Gender History, but also between these fields of research and Lgbtqi History. The common thread of this path has been Anna Rossi-Doria’s teaching and its implications for the author’s research experience. In particular, in its last part, the article focuses more specifically on Rossi-Doria’s works on women’s subjectivity and citizenship, two categories which have mostly affected the author’s historical research on trans people and the trans movement’s demand for legal recognition in contemporary Italy.

The constant attention paid by Anna Rossi-Doria, as a scholar, on the one hand to women’s history and on the other hand to the Shoah and its memory, focused on the Shoah after the revival of anti-Semitism in Europe in the 1990s. However, even after this turning point, she tried to maintain her double focus, which was based on her constant and enlightened attention to the question of the right to difference.

Memory is a valuable source for the history of Nazi and Fascist deportations. History is a required source for the memory of deportation. As Anna Rossi-Doria wrote: «There are many common threads between history and memory [...] it is necessary to launch a sort of reconciliation between history and memory». Undoubtedly, even seventy-three years after the Liberation, deportation, as a whole, is a kind of event that seems irreducible to the common interpretive categories of history. The transition from memory to history has been repeatedly demanded by deportees, but their experience has remained on the margins of historiography for a long time. This paper is based on this conflicting but necessary interweaving.

This work offers a transversal interpretation of Anna Rossi-Doria’s studies on women, memory and Shoah. The theses of the historian are connected to the debate on “politics of memory” and in Women’s and Gender Studies. The study reveals the profile of an intellectual who denounced the “distortions of memory” since the early 1990s and who gave a meaningful contribution to the historiography. Particular attention is given to the specificity of the female experience, to the theme of the body and to the relationship between testimony and literature.

Anna Rossi-Doria’s interest in the history of the peasants and the Southern Italian countryside arose while she was a student, when the participation in the protest movements of 1968, the close contact with some intellectuals and a family environment influenced by her father – Manlio Rossi-Doria, an expert in the social and economic problems of Southern Italy – created the conditions for one of her most important publications, on the so-called “Gullo decrees” issued in 1944-45. The interest in the peasants’ history never completely abandoned her studies, becoming part of a wider reflection on history and memory, beyond the traditional historiographical approaches.

The article deals with Anna Rossi-Doria’s essays on the history of the Southern Italian peasant world in the post-Second World War years. Rossi-Doria focused on the relationship between these movements and the political parties (in particular the Communist Party) and the trade unions, but, above all, she studied their need to be part of history and the ways in which they acquired awareness. Unlike the long and extensive historiography that has only seen the political aspects of these peasant struggles in the Italian “Mezzogiorno”, Rossi-Doria takes into consideration a number of different issues, making political and social history interact.