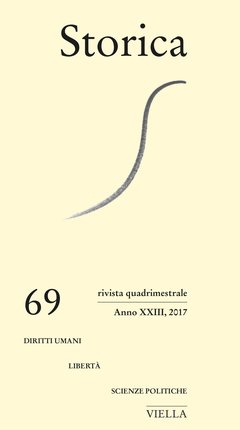 This essay examines some aspects of the historiography on human rights, which has experienced an extraordinary development since the 1990s. Periodization is, as one of the issues on which the debate was most vivacious, is discussed ﬁrst. The essay reviews interpretations proposed by different scholars, and interrogates the reasons why the quest for the origins of human rights has become a priority for historians. The discussion about when human rights are born has not only raised important questions, but also diverted attention from a second important issue: the interplay between human rights studies and «general history». Has research on human rights inﬂuenced the development of recent historiographical trends? How has it contributed to shaping methodological tools and interpretative categories of broader relevance? The second part of the essay tackles these questions focusing on the aftermath of World War II and the beginning of the Cold War, around which the ﬂowering of research on human rights was particularly signiﬁcant.

This essay discusses the complicated events that led to the reform of the political and social sciences and their introduction into the Italian university system after World War II. The two disciplines, despite being obstructed in the same way by an hegemonic culture of philosophical idealism, started from very different points of departure. The political sciences needed to reconcile with the past, namely with their manipulation under the fascist regime; the social sciences were driven to respond more effectively to the challenges of modernization of the country. If the initial reform proposals of social and political studies went all in the direction of a new and single faculty of «political and social sciences», ultimately what prevailed were the reasons for disciplinary specialization. The result was the reform of the old Faculty of Political Sciences (the so-called Maranini-Miglio) and the establishment of a new Institute of social sciences of Trento, destined to become the ﬁrst Faculty of Sociology in Italy.

This forum discusses a book that identiﬁes, in its very subtitle, an alternative history in opposition to the dominant «storytelling» on the French nineteenth century. The book’s focus is on ﬁgures such as the vanquished, the anonymous, the forgotten of ofﬁcial history, women, colonial subjects, slaves, workers, and the proto-proletariat organized in the Parisian sections of 1789. The actual proletariat would ﬁnd its expression in the 1848 Ateliers Nationaux of the workers, especially in Paris and in large urban centers, to which the Author dedicates rich and passionate pages. At the core of the volume, therefore, there is the people and its associations, which claim their rights to emancipation and democratic participation. Re-thinking «the people» leads, for the Author, to a new form of history-writing.