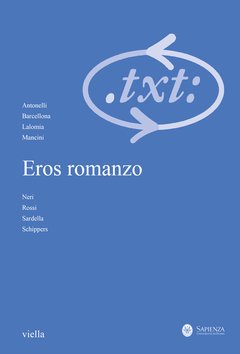 The present study concerns the interrelations, during the middle centuries of the first millennium in Europe, between traditional religions and Christianity. Such interrelations involved doctrine, ethical behaviour, the ability to write about eros, sexual behavior, world view and culture lato sensu.

The essay discusses Romance erotic poetry and the making of the ideal of courtly love as it developed during the XIIth and XIVth centuries, first in the courts of southern France, later in Sicily at the court of Frederick II and eventually by the poets of the Stilnovo, Dante and Petrarch. It touches upon the eterodoxy, as it were, of the cultural phenomenon with respect to monastic tradition in Latin, to illustrate the oppositions around which courtly poetry rotates, as it affords – already in its most ancient examples – both an immediate request and the more abstract need to fill the gap separating the lyric self from the object it addresses. The author also discusses the ways in which the creative imitation of Occitan poetry by Sicilian poets lead to a philosophic discussion of love and its consequences, increasingly centred on the self of the poet, which is the only true protagonist of the poetry of Cavalcanti, Dante and Petrarch.

The interpretation of both trobadoric lyric and courtly narrative has been dominated, for a long time, by fascinating figures such as Jaufre Rudel, or Tristan and Lancelot, who experienced love as distance, suffering and death. This paper describes the impact produced by the works of Spitzer, Nelli, Topsfield, Köhler, who revealed that the world of the troubadours entertained a «cult of emotions», and a pursuit of joy. Courtly narrative, alongside the desperate spleen of Tristan or Galehaut, also affords examples of sophisticated intelligence and humorous irony.

The article moves from the enigmatic start of Dido’s tale in which a diabolical trio offers the caste heroin a powerful love filter that will make her lose her senses, subjecting her to the unbridled passion that will lead to her suicide. The article discusses how this exemplary tale was reworked in the twelfth century in the Occitan and Old French literatures, eventually dividing into two different streams, one on the loves of Aeneas and Lavinia which lead to a happy ending (not discussed here), and the other, desperately tragic, narrating the vicissitudes of Tristan and Isolde.

The main objective of this survey is to give an idea of the development of Arabic love poetry in the classical Middle Ages in the Arabic countries and the Iberian peninsula. Some Hebrew poet from Muslim Spain will also be mentioned, because the Arabic speaking Jews composed poetry in the Arabic literary tradition, using a kind of Biblical Hebrew, reconstructed from the Hebrew Bible. The terms which indicate forms and genres are given extended explanations and discussion.