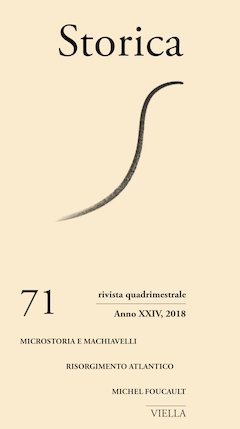 This essay discusses the recent collection of essays on Machiavelli by Ginzburg (Nondimanco, Adelphi, 2018) and shows its many shortcomings. It is unlikely that casuistry counted much for Machiavelli (whose thoughts on necessity and derogation are indebted instead to Roman law); Machiavelli did not limit himself to subverting Aristotelianism from within but attacked the Aristotelian tradition head on; The Prince’s caesura in the history of political philosophy has nothing to do with a shift in politics from praxis (ethically connoted) to poiesis (ethically neutral), which would have for Ginzburg caused the separation of politics from ethics; Blaise Pascal’s anti-Machiavellianism cannot be traced back to his polemic against casuistry and the Jesuits, and so on. At the origin of these profound misunderstandings is the decontextualizing use of erudite elements and a minimizing of the role Machiavelli’s involvement in Florentine struggles played in the birth of his revolutionary political theory. Moving beyond the failure of Nondimanco’s investigation, however, above all this essay intends to discuss the problems of «cultural» micro-history and to offer a new explanation for the methodological differences that arose early on between Ginzburg himself and «social» micro-historians like Edoardo Grendi and Giovanni Levi.

The Risorgimento was intertwined with major changes that led the birth of the modern world. From the beginning of the Bonapartist domination in Italy up to the Porta Pia breach, the Italian unification process was strictly connected with contemporary events in the Atlantic space, pushing men, ideas and projects to move between the Old Continent and the New World. In the face of the order established by the Congress of Vienna, Italian patriots represented one of the main threats to the balance of the Restoration. This article focuses, using a longue durée perspective, on the experience of three generations – Napoleonic veterans, liberal and republican exiles, garibaldini volunteers – who carried on the revolutionary struggle (from the pre-unitary states to Italy and abroad), in order to rethink the phenomenon of Risorgimento patriotism in an Atlantic perspective and show its close connections with the global dynamics that marked out the developments of 19th century modernity.

The forum, coordinated by Fernanda Alfieri, discusses the last volume of Michel Foucault’s History of Sexuality. The book was published posthumous, thirty-four years after the previous two volumes of the series (The Use of Pleasure and The Care of the Self). Valerio Marchetti and Antonella Salomoni place Les aveux de la chair in relation to the general plan of the History of sexuality by following its reformulations and its rethinking of the connections between subject, sexuality, truth and power. Roberto Alciati reads Les aveux de la chair within the framework the studies on ancient Christianity and, recalling Pierre Bourdieu, focuses on the crucial role of practices in the organization of the first monastic communities as well as in the shaping of the subject of desire. The review essay by Paolo Costa is an inquiry into the relationship between sexual life and personal identity; it contextualizes and deconstructs the standard picture of human sexuality on the basis of Foucault’s last work on the subjects and finally focuses on the Augustinian tension between cupiditas and ordinata dilectio as a core problem of sexual ethics in early Christianity.