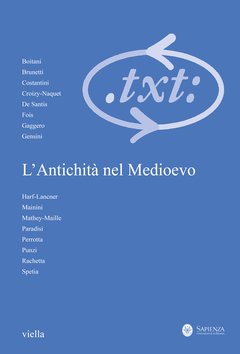 The article discusses Polissena in Benoît de Sainte Maure’s Roman de Troie. Benoit uses a complex web of sources in describing the death of the young woman, killed on Achilles’s tomb, so as to produce a new interpretation of the ancient topos of the sacrifice of the virgin.

As is well known, among the Italian illuminated manuscripts of Benoît de Sainte-Maure’s Roman de Troie, W, C and S form a compact group and were most likely produced in the same artistic and cultural milieu. The main connection between the three manuscripts is represented by the so-called Maestro degli Antifonari di Padova, the artist who realised the whole illustrative cycle in W and a good number of the miniatures in S. The identification of the scribe for manuscript S as Galvano di Bologna, head of one of the most prosperous workshops in Bologna, whose activity took place in close contact with the University and with the Dominican environment, offers new insights in the historical and cultural context in which W and S were produced.

The Partenopeus de Blois reveals itself as a forerunner of the new romance genre in terms of structure and declined motifs. In particular it can be defined as the first Merovingian romance, because it is the first in France to bring back the myth of the Trojan origins of the Franks interpreted in a very original way, and at the same time provide a – historically founded – genealogy of the first sovereigns up to Clovis, linked to Christianity. In order to exalt the family of Counts of Blois, with its obscure origins and with a non-exciting past, the anonymous author also writes for the benefit of the French monarchy, suppeorted by Counts of Blois. But above all, the author in claiming for his writings the status of estoire, even though they were founded on a fable as Sarrasins, reveals his rivalry with the author of the Roman de Troie, which may help us determine his identity.

The great success of Guido delle Colonne’s Historia Destructionis Troiae never dwindled during the medieval period, particularly in France. Amongst its French translations, two are particularly noticeable: the first by virtue of how closely it follows the source, the second, equally accurate, on account of its erudite and varied contributions which enrich the letter of its source. The examination of their differing features – in light of a particular episode of the Trojan legend – allows us to appreciate the diverse readings the matter of Troy inspired in different places and milieux.

The paper examines the transmission of the Trojan myth and its main text, the De excidio Troiae, along three stages of classical reception. During the Carolingian period (Paris, BnF, lat. 7906), when the matter produces the Franco-Trojan link, and the myth is “Germanized”. Along the 12th century (BAV, Vat. lat. 1795), when the De excidio flows into historiographical manuscripts focused on Crusade-Orientalist topics. Finally in the pre-humanistic era (BML, Pluteo 89, inf. 41), when the Trojan matter, in Italy, becomes part of “historical-antiquarian” collections.

The different portaits of Bucephalus in the French medieval Alexander romances reveal divergent interpretations of Alexander himself. Bucephalus, «ox-head», appears, from one narrative and one iconographic cycle to another, a beautiful and defaultless steed for a knightly king, or the monstrous double of an ambiguous hero.

The article analyses the narrative order of the biography of Alexander the Great in the stratification of textual frameworks as documented by the istoriated capitals in the mss. C (Cambridge, Trinity College O.09.34) and P (Paris, BnF, fr. 24364) in the interpolated version of Thomas of Kent’s Roman de toute chevalerie.

The paper analyses the structure of the manuscripts transmitting the Roman d’Eneas, and considers the position and quantity of the texts containing ancient matter within each manuscript. The Eneas and the Brut are most frequently coupled, which somehow confirms the role of the y family in the stemma codicum. This is also reflected in some loci critici in the Eneas.

The essay relates the results and the expected developments of research coordinated by Brunetti at the University of Bologna, concerning texts and themes from classical antiquity to the Middle Ages. The authors discuss the Roman de Thèbes, in particular the controversial stemmatic position of the fragments preserved in Angers; and the compilation of the MS. Cologny, Fondation Martin Bodmer, Bodmer 147, a remarkable blend of Arthurian novel and Matter of Rome. The paper also discusses the outcome of research aimed at proving the existence of a specific cultural project as premise to the composition of the Franco-Italian mise en prose (Prose 2) of the Roman de Troie.

Many historiographers have attempted to establish a continuity or a comparison between the Roman past and the past of the people whose history they are narrating, by claiming a link with classical or late Antiquity. Wace, the author of Roman de Brut (finished in 1155), and of the Roman de Rou (started in 1160), followed this path. The purpose of this article is to evaluate how and why Wace, walking in the footsteps of the sources to which he refers, integrates Rome and Roman history in his two chronicles, how he uses the very name of Rome, the reference to the Universal City, in order to better celebrate the Breton and Norman sovereigns.

Old French chronicles on the Crusades sometimes mention characters and events from ancient history when discussing the geography of the regions were the events they narrate took place. This study starts with a comparison between William of Tyre’s Chronicon and its Old French translation, and proceeds to analyse the two main strands of references to classical Antiquity, those about Troy and those about Alexander the Great. The aim of the study is to understand how the authors accessed information about ancient history, and the role plaid by such allusions in their chronicles.

This paper focuses on a hitherto unknown French text, Moses ben Abraham’s Livre. The Livre dates back to 1244 and is partly a chronicle of ancient history (from the dispersal of Noah’s descendants to the reign of Herod the Great), partly a summary of apocalyptic doctrines, and partly a treaty of biblical and contemporary ethnography. It is based on Hebrew sources (notably, for the historical sections, on the Sefer Yosippon). Moses addressed it to William of Auvergne, bishop of Paris. The Livre is an unprecedented testimony of the usage of French in the Jewish-Christian dialogue on biblical history and scriptural exegesis. Firstly, I describe the Livre’s contents and make a first survey of the sources; secondly, I explain why it was composed; thirdly and finally, I formulate an hypothesis about the circumstances of production of its only manuscript (Den Haag, Koninklijke Bibliotheek, 131 A 3).

From Alexander to Caesar: the Roman de Perceforest
Giulia Boitani

The paper traces the Roman de Perceforest’s evolving inter-textual relationships with the Alexander (Jaques de Longuyon’s Voeux du Paon), the matière de Rome (Horose, the Faits des Romains) and the British chronicle (Geoffrey of Monmouth’s Historia Regum Britanniae). These literary ties with antiquity – successively forged and broken by the romance’s author – follow a genealogical pattern which allows for the gargantuan text to deploy its narrative in accordance with the traditional concept of translatio imperii et studii. At the same time, the romance’s original re-configuration of the dichotomy between “Greeks” and “Trojans” permits a profound re-writing of the intertexts themselves, leading to the Hellenisation of European history against traditional narratives of Trojan foundation.

The article proposes a reading of the chivalric poem entitled Trabisonda (printed in Bologna in 1483) against the background of the relations between the Italian peninsula (and Europe) and the East in the second half of the fifteenth century. In the context of the Turkish offensive against the West since the fall of Constantinople in 1453, the propaganda content in the Trabisonda exploits Carolingian chivalric matter. The poem evaluates the political situation and strategies of the West against the enemies (within the work, the pagans). It echoes the anti-Turkish propaganda in favour of a crusade. Once the Ancient Christian empire fell in the hands of the Turks, Trabisonda (or Trebisonda) is given back to the Christians (at least in the fiction of the poem), the restitution having been obtained despite the pusillanimous and personalistic management of the power attributed to Charlemagne. Trabisonda represents the possibility of defeating the enemy pointing straight at the heart of his empire, and of recovering all those commercial and then military outposts that the Christians had lost from the fall of Constantinople onwards.