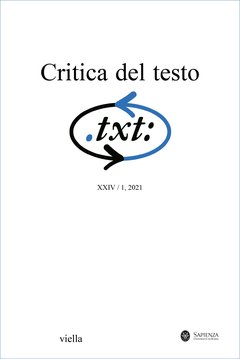 The essay examines three formulae of incantation for the prevention of bleeding, two in Latin and one in Alemannic, traditionally grouped because of their shared subject matter, but whose interpretation is still controversial. From the comparative reading of the three enchantments emerges that all three are located in Mount Calvary, and that the characters involved were no less than Joseph of Arimatea, the Virgin and Jesus Christ.

The Viennese manuscripts ÖNB, 2609 and ÖNB, 2621 are attributed to the same scribe and the same illuminator. The article discusses the poems contained in both, with particular regard to the unpublished ones. The author suggests that a third manuscript, Dresden, SLUB, Oc.064, may also be attributed to the same scribe and that the Dresden manuscript and the Viennese ms 2609 may have been part, originally, of the same editorial project.

The essay offers a new edition of the Argomenti di Elegie I-IV (C.L. B. XV 20) which connects material and textual elements, and preserves the unique graphic features of the manuscripts, in particular Greek and Hebrew characters. The presence of Hebrew (a hapax in Leopardi’s writings), is discussed in connection with the author’s relationship with the language. Through the analysis of selected passages from the Zibaldone, the essay attempts to shed some light on the link, particularly apparent in the first three Argomenti, between the themes of love, the biblical sublime and the Hebrew language.

This article is a critical study of water symbolism and the presence of the sea in a novel of Machado de Assis mature phase. Time, memory, and change flow in the confrontation between the jealous Bento Santiago, a man of the land with eroding power, and the personal merit of women with the astute intelligence of Capitu or the pragmatism of an emerging merchant class to which Escobar belongs. The latter drowns in a stormy sea that finally engulfs Bento’s marriage to Capitolina. Machado’s filigrees form a narrative palimpsest, with traces of readings that must be pieced together to fully construct the meaning that also nature provides, beginning with the psychological and social incorporation of the characters. Capitu’s “undertow eyes”, an obsessive image of the waves and the sea in Dom Casmurro, are the product of work patiently developed over many years in other texts by the Rio de Janeiro author.