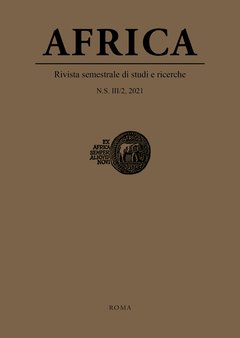 In 2011, the seemingly solid institutions of the polities of the Arab world suddenly collapsed. Scholarly knowledge of these societies proved inadequate to account for these events. This new political and scholarly context lies at the heart of the present article. The involvement of foreign powers in the “Arab spring” resulted in the revival of colonial insights, now treated as a veritable toolkit for understanding the societies subjected to interventions. It recharged discussion of the complex connections between the legacy of colonial knowledge, domination and decolonization, giving rise to situations conducive to restoring old, “orientalist” concepts and imaginings. Our case study is the West’s 2011 intervention in Libya and the related reconfiguration of past approaches fashioned around the concept of “tribe”.

This article examines one of the rare manuscripts produced during the Italian occupation period. It was written by Sirak Fäqadä Sǝllase in a manner similar to the chronicles both in calligraphic style and content. The manuscript sheds light on the life of Däǧǧač Abba Wǝqaw Bǝrru, one of the least known political figures of the twentieth century. Däǧǧač Abba Wǝqaw Bǝrru was commander of the palace bodyguards between 1925 and 1928. Sirak’s account outlines the life of Abba Wǝqaw from his childhood to his adulthood. This study critically examines this rare manuscript in comparison with other existing sources. In addition to consulting contemporary primary and secondary sources, attempts have been made to gather oral information about the untold stories of Däǧǧač Abba Wǝqaw Bǝrru. The study also sheds some light on the relationship between Empress Zäwditu and her regent Ras Täfäri before the latter was crowned as Nǝgus in 1928.

Livelihood and Sustainability in the Eritrea-Ethiopia Borderland: A Case Study of Soräna
Biyan G. Okubagherghis

Using an ethnographic fieldwork approach, this paper attempts to understand the socio-economic dynamics of the residents of Soräna, whose town was the epicentre of a two-decade-long political and military standstill between Eritrea and Ethiopia (between 2000 and 2018) along their common border. The study focuses in particular on the effects the situation had on the inhabitants’ livelihood choices and sustainability. It finds that the political and military developments between the two countries at the border over nearly two decades not only created a heavy burden on the borderland communities’ socio-economic bases, but also concealed them from the mainstream of development as the town became marginal, as well as being a frontier state space. This empirical site has therefore proved the traditional notion of borders as barriers.

Food Security and State Agricultural Policies: The Long History of Cassava in Zambia from the Pre-Colonial Period to 1990
Chama Kaluba Jickson

Despite the existence of several studies of cassava in Africa, the long-term history of the crop and of the relationships that it engendered between producers and successive state administrations remains underexplored. Based on oral interviews and a close reading of nineteenth-century travelogues and archival material, this article is an attempt at contributing to the historiography of cassava in Zambia. The article examines the role of cassava in food security in two regions of present-day Zambia, Luapula and North Western, where the crop has long served as a fundamental staple food. Further, it explores how the role of cassava in food security intersected with changing government policies, from the pre-colonial period to the late twentieth century.

In 2000, the University of Turin awarded the Italian partisan and historian Angelo Del Boca (1925-2021) a laurea honoris causa in African History. In his lectio magistralis, Del Boca reflected on the problems that had afflicted the continent in 1960, the “Year of Africa”, placing special emphasis on the incomplete nature of independence and of the decolonisation process. The lectio epitomizes Del Boca’s half-century long commitment to African issues and passionate rejection of the legacies of colonialism. More than twenty years after it was first delivered, the lectio remains relevant today and attests to the powers of observation and insight of a great witness of an era replete with both opportunities and failures.