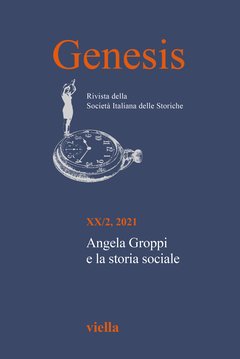 Angela Groppi has devoted herself to labour history in a gender perspective since the 1980s. Her innovative approach is to combine the history of women’s rights and the history of their economic activities. Her research made it possible to completely revise the model, proposed mainly for northern Europe, of the exclusion of women workers from trade guilds. In her numerous publications and in particular in the volume Il lavoro delle donne (1996), Angela Groppi has questioned the gender identities of work and the model of the artisan family based on the shared work of husband and wife in the workshop. The link between property rights, inheritance rules and marriage systems is today at the centre of a debate on family and economic models in Northern and Southern Europe. We must be grateful to Angela Groppi for opening this debate

This article focuses on the role of families and institutions in the assistance of the elderly in the early modern period by placing the work of the historian Angela Groppi in a more general historiographical context. It first reminds us that this question is strongly conditioned by demographic structures and the definition of old age, which was less a question of age than of weakness. The article questions the link between residence and intergenerational solidarity by discussing the theses of Peter Laslett. It highlights two fundamental aspects of Groppi’s work: the moral and contractual dimension of the solidarity of children with their parents, whose failure to do so justified recourse to justice in Papal Rome, and the place of families in foster care institutions, which formed a system of assistance based on their complementarity.

The essay focuses on two pivotal aspects of the historiographical themes examined in depth by Angela Groppi: the social history of “total institutions” and the history of women’s political rights. Groppi tried to investigate the complexity and the specific logic of the relationship between the institutions of “social control” and the interned, as well as the role of their relatives and other mediation figures. In an original way, she studied the theme of women’s citizenship during the French Revolution and the beginnings of the welfare state. She shows, in both fields, the importance of a more flexible category of power and how the struggle to live, exist and act was the most important goal for the 19th-century popular classes.

From Charity Refuges to Prisons: Gender and Enclosure in Early Modern and Modern Rome
Mary Gibson

Angela Groppi was a pioneering historian of institutions of confinement in early modern Italy. This article explores her theoretical contributions to the field drawn from her research on two such Roman institutions, the Buon Pastore “conservatory” for girls and the section of the San Michele hospice dedicated to the elderly. In both cases, Groppi argued that lay and religious patrons employed enclosure to both assist and discipline poor and marginal individuals based on their gender, age, and class. The author (Gibson) then relies on her own research to trace the transformation of each institution into a prison, a more restrictive type of institution, after Italian unification in 1861.

Angela Groppi has left to posterity an exceptionally rich personal archive in terms of both historical and historiographical material. Among her papers is an extensive and far-reaching scientific correspondence which reflects both her personal trajectory and the vitality of the academic context in which, thanks to her outstanding work, she became a leading scholar. This contribution aims to retrace the first twenty years of Angela Groppi’s career through her correspondence and to reconstruct a complex mosaic of remarkable scientific exchange.

Angela Groppi, in a reflection on the complex history of the journal «Memoria» (1981-1993), quotes Josef A. Schumpeter’s well-known conception of the entrepreneur as an innovator, and of the strong connection between invention and innovation. Angela Groppi has been one of the scholars who have been more aware of the difficulties historical research has met in the field of Gender Studies in the twentieth century’s last decades. Nevertheless, she has been “obdurately” most consistent with Schumpeter’s theory: an innovating project is bound to be fulfilled and made known. This is a stern call to an historian in her profession, and a deep and creative value in her life.

The essay focuses on the meditated studies reviews representing a distinctive note of Angela Groppi as historian as well as the core of her methodical renewal in the History of French Revolution, in the history of family, work, welfare state, ageing and old age; both on a methodical and on an interpretative level. The analysis is intertwined with the memory of the personality, the professional and academic life of an original and severe historian, in the light of a long friendship, sharing of life and common initiatives.

Angela Groppi’s research has been dealing with the issue of the opportunistic uses of peculiar forms of status by some historical subjects in order to protect themselves. On this topic, she has been suggesting analogies between women and jews: in both cases, they succeeded in reversing the lack of rights in a surplus of special protection. This article discusses some implications of this approach launched by Angela Groppi on other historical topics, like work and citizenship. It warns against too drastic dichotomies between submission and rebellion, and evokes a similarity with Angela’s personal experiences.

The autor presents some souvenirs of his intellectual friendship with Angela Groppi, started in 1986 and cultivated in mutual appreciation between Italy and France.

The author outlines a quick sketch of her memories of some of Angela Groppi’s passions, both intellectual and personal: among the scientific ones, the entwinements between life and historical research, her love for archival sources, bibliographies, editorial skills; among the civil ones, politcs, feminism, ethics, justice.

Angela Groppi's innovative work on Pontificial welfare practices with regard to the elderly paved the way for new research paths also on husbands’ maintenance duties, complicating the history of marital separations in pre-liberal societies.

Gender represents a pivotal category for analyzing the practices and objectives of the organizations opposed to military and civil nuclear power and for interpreting their dynamics. Starting from this consideration, the essay aims to reconstruct some of the main events relating to women’s protagonism in the Italian anti-nuclear movements over a wide chronological period, between the 1950s and the 1980s, trying to capture elements of continuity and discontinuity, interweaving, innovation and international influences. The essay also questions the interactions between pacifism, anti-nuclearism and environmentalism and the construction of a female leadership.