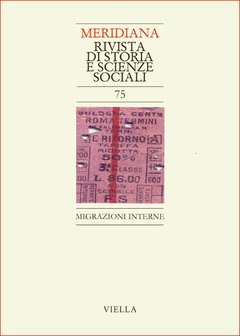 Faraway so close. Internal migration of yesterday and today
The essays presented in this issue of the review make the point of a structural aspect of the history of contemporary Italy, for a long time underestimated both in science and in public debate and still very current today. These contributions are drawn from research programs very different from each other: historical, sociological, demographic studies involved in rebuilding some pathways related to internal migrations and that, despite their diversity, have been faced with the same problems. The framework that emerges is of a mobile society. The variable mobility can become the reading key for rethinking the relationship between the regional areas of the country, the concepts of development and underdevelopment, the evolution of the labor market, the role of the ruling classes and the own specificities of the urban and rural areas.

A Rural View: Italy’s Internal Migration in the Mirror of Ferrara’s Countryside (19th Century)
Historical studies on contemporary Italy’s spatial mobility focused on emigration abroad and on urbanization. Rural migrations have been neglected. As a result, understanding of common, everyday movements, which represent mobility’s «elementary structures», has been lost. A general, quantitative picture of internal migrations in contemporary Italy is lacking, partly because italian mobility is articulated in sub-national migratory systems, as the ones based on the Po Valley, in the northern side of the country. Grounded on documentation held by local archives and on data preserved in register office, this article focuses on mobility in Ferrara’s countryside during 19th century (emigration, seasonal migration, internal mobility). It discloses distinctive characters and a considerable amount of variation in mobility’s volume and geography. Ferrara’s case helps to show the inadequacy of current assumptions about mobility (growth in contemporary age, preponderance of male and youth single movers) and it confirms the close relationship between mobility and kinship.

«Replenishing Italy»: Migration and Internal Colonization Projects in Liberal Italy, 1868-1910
This essay focuses on internal migration and internal colonization in Liberal Italy, pointing out some relations with the global context. The second half of the XIXth century and the first 15 years of the XXth one were the age of mass migrations: while colonizing societies spread all over the world, some Italy’s intellectual and governmental milieues thought that domestic problems concerning rural unemployment and social conflicts could be solved through the diversion from outward migration to internal migration flows. According to this perspective, the Italian State had to create the colonizing myth of a «Near-South» towards uncultivated lands in Southern Italy, where mass emigration of rural workers left empty space for an ‘agrarian renaissance’. A first experiment was conducted by public institutions (the State and a Prefect) in 1889-1890, and it failed completely: some workers from Northeast Italy placed in Sardinia came back or died in a few months. Some years later, in 1905-1907, the initiative for the colonization of the Mezzogiorno was taken by the Northern socialist movement.

The Other Road. The Internal Migrations from Friuli (1919-39)
The article discusses the issue of internal migration from Friuli towards other Italian regions during the interwar period, trying to outline the phenomenon (destinations, jobs, female mobility, chain migrations) and the relationship between internal and abroad migration. Analyzing the mobility of five friulan villages, the article focuses on spontaneous migration, highlighting the circularity of migration between Italy and other countries and the failure of the fascist migration policies on mobility during the Great Depression.

The Overtaking. Social Female Route in the Second Southern Italy Generations in Turin
Many years after the end of the great internal migrations, a significant part of the population of Turin has southern origins. Historical studies only dealt with the first generation of immigrants, failing to analyse the destiny of the second generation, which grew up in a period of important economic transformations for the industrial North, namely the Seventies and the Eighties. Today, in Turin, coming from a family of southern immigrants means to belong to the working class. The reasons of this scarce intergenerational social mobility have not been exhaustively investigated. Two studies dealt with this issue and pointed out that the disadvantage of the sons of southern immigrants in the social pyramid finds its roots in the lower commitment to education, compared to locals. However, this phenomenon involves important differences according to gender. This article presents the results of a research that compared the educational paths of sons and daughters of southern families and local families. Boys and girls coming from southern families appear to have highly differentiated paths. The formers leave school earlier and immediately enter the labour market as workers. The latters seem to invest more in education and this gives them access to clerical jobs.

The Immobile Generation Has Begun To Move: The Case of Southern Students in Turin
The article deals with the restart of internal migrations in Italy, focusing on high skilled migrants, specifically young southern students who attend the university in Turin, in order to get educational credentials, useful for finding a job in the same town where they have studied or in another region, even abroad. The aim is to explore the phenomenon, by analyzing depth reasons and future plans of the displacement. The second topic is young people’s self-concept change and their relationship with family, friends and original context, because migration may induce a process of emancipation from parents and create a break with social and cultural background. Gender and social classes affect the experience, producing multiple pathways. Benefits of the DSU system reduce social inequalities on the opportunity to choose a college far away from home, since commuting seems to be a «survival strategy» of lower-class families, but recent budget cuts put in question the role of this public institution.

Internal Migrations from South Italy between Job Search and Job Mobility
The recovery of internal migrations in Italy from second half ’90, showed the recovery of stronger regional difference in Italian economy, even in the presence of a greater dynamism of some regions of southern Italy in this period. But the recovery of this trend has been obscured, one hand, from most strong dynamic of the external migrations, and the other, by the fact that the analysis has focused almost exclusively on a idea a emigration mostly qualified of labour force, obscuring the continuity of emigration of working class that is still today a constant of the internal migrations in Italy. If these trends must be included within an more larger process of territorial’s mobility, that sometimes is independent only by the job search, at the same time the causes that are at the basis of internal migration are confirmed by the persistence of gaps in economy development and quality of service of the Italian regions. However the recent economic crisis and the incessant process of deregulation of labour market and not last the increased of immigrations from other countries have complicated the analysis of these trends at least regard to the pull factors in contrast to the push factors that have remained the same.

The Internal Migrations of Foreigners at the Time of Immigration
Foreign immigration is certainly one of the key processes that have changed Italian society in recent decades. The increase in the number of foreigners living in Italy has had important effects, among others, also on inter-regional mobility, leading to a growing interest from the scientific community and official statistics. The present contribution offers a predominantly statistical analysis of the phenomenon based on the population register data processed by Istat. The analysis shows that the internal mobility of foreigners is essentially tied to the volume and characteristics of the flows from abroad and the ability of destination regions to offer a stable insertion in the labour and in the housing market. Overall, the migration to Italy and the subsequent internal migratory moves in Italy illustrate the great ability of foreigners to react dynamically, flexibly and swiftly to the regional socio-economic situation. This is an important feature in Italy, a country that for decades has shown an apparent discrepancy between significant regional socio-economic differences and relative low levels of interregional mobility.

Let’s go home. Memories and Identityof Sicilian Emigrants
There is a silent and constant flow of Sicilian migrants going back to their villages of origin after many years spent working abroad. Most of these migrants go back with a pension that promises a quiet life, but they are not old enough to retire and they are not fully convinced of their choice. Returning migrants can only tell their intimate and contradictory, painful and ambivalent reasons. Collecting a large number of lifestories, where commonality and individuality are decided by memory paths, means facing the slippery subject of the so called return identity. There is nothing predictable in the choice of meeting again no longer familiar people, places, lifestyles.

Can Italy Growth if the Mezzogiorno Does Not Growth?
«Meridiana» has promoted a forum starting from the issues raised by the volume of Carlo Trigilia, Non c’è Nord senza Sud. Perché la crescita dell’Italia si decide nel Mezzogiorno (Bologna 2012). In the discussion it is argued the need to change lenses through which reading the Southern society, first to try to explain why the «node» of the Mezzogiorno remains undissolved and why today it assumes a new and strong relevance for the whole Country. Then, the explanations on the persistence of this node are critically discussed, taking into consideration those who focus on the economic dimension and those that insist more on the cultural dimension. The first type of explanation refers mainly to a lack of resources, to the fact that there would be insufficient aid to sustain the development of the southern regions. The second explanation instead calls into question the low civic culture, defined in terms of lack of social capital also. In both cases, the political factors are underestimated, especially the role of policy, local and national. In this perspective, we also discuss the role that the central government should have, especially with regard to the allocation of public resources. In the volume placed at the center of the debate, it is argued that the main goal should be to promote the delivery of services and public goods that allows the best use of the local resources available to the southern regions. In fact, the problem lies not only in the allocation of local resources, but rather in their mobilization, that is the ability to transform them into economic activities and development opportunities.