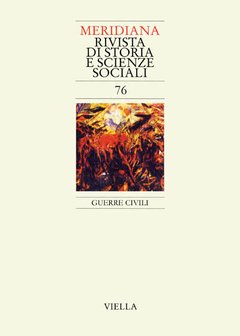 The Imagined Civil War. A dilemma of Republican Italy
The author denies that in Italy, in the Republican period, from 1946 to today, there has ever been a situation of civil war. He criticizes that many – albeit in a metaphorical way – use this expression to define the harshness of the political conflicts between communists and anti-communists. He points out that there is a common terrain of respect for the law and republican spirit. It’s true, however, that not a few, on the sides of the extreme right or the extreme left political parties, designed coups d’etat or carried out indiscriminate or targeted terrorist actions, which bloodied and shocked the country. This essay reconstructs their rhetoric: they have portrayed Italy as if it was in a situation of de facto civil war, have imagined a country that was not and in this way they have tried to change the course of its real history.

Civil Wars. A Theoretical Route
Since the Cold War, social scientists started the systematic study of the phenomenon of civil war, but for nearly half a century this analysis was subsumed and partly hidden by the logic of bloc politics. The end of the bipolar system unmasked some revolutionary wars of national liberation that were, simply, civil wars. That is when systematic analysis of internal armed conflicts began. This paper analyzes the problems in defining such conflicts; their classification in «classical» conventional wars and «new» low intensity wars; hypotheses about their origin, duration and recurrence; violent dynamics that generate, and possible avenues of resolution through intervention, negotiation or peacemaking. We conclude that the systematic study of civil wars are taking their first steps, and that this phenomenon must be analyzed as a high cost strategy aimed at the conquest of power, revolution, counterrevolution, or the elimination of the adversary. While their origins, development and objectives are political problems, we must not forget other manifestations, such as the confrontation of war strategies, legal and strategic implications and the aftermath of these internal conflicts in the international scene.

Time of War. Conflicts, Patriotisms and Political Traditions in the Italian Mezzogiorno (1859-66)
The article interprets the end of Neapolitan kingdom through the paradigm of conflict and political violence. The clash between national projects is outlined according to three points of view: civil war, opposite patriotism and community alternative policies. The scheme defines the split of the community in two separate blocks with incompatible projects, but still co-existing in an homogeneous society, both linguistically and culturally. In the first part, the focus is on the chronological reconstruction of the southern crisis within the early construction phase of a unitary state (1859-66), which is necessary to check the real coexistence of the proposed alternatives. The same track is used afterwards in order to analyze the main fractures that came into a resolution in those years, to understand if this was indeed the outcome of a long-term political and ideological process influenced by past events.

The Fascist Civil War
The aim of this paper is to show how the category of civil war could be used to study Italian fascism. The essay begins by concentrating on the fascist movement organisers’ squads foundation since early 1919 and the use of World War symbology. The party’s enemies were, among others, socialists and the members of the Catholic party. Nevertheless, the concept of an «internal enemy», allowed the fascists to fight their political opponents with the insinuation that they represented a danger to the whole Nation. Thus, the period of «squadrismo» (1920-22) could be considered a civil war not only for the high levels of political violence, but also where this historical period’s long-lasting legacy is concerned. The last paragraph purposely focuses on Civil War memory, which represents a characterizing issue of the regime’s self-consciousness until the late 1930s. The aftermath of these facts turned out to be the instrument of an ideological chasm between the fascist nation’s plan on one side and its estranged (antifascists as well as non fascists) on the other.

Resistance, Anti-Fascism and Civil War. A Debate Between History and Politics
The essay reflects on the debate following the publication in 1991 of the book A Civil War written by Claudio Pavone. The definition of Resistance as a civil war, made unusable the public rhetoric built from 1945 onwards, marking the end of the anti-fascist paradigm as a source of legitimacy of the party system born the day after of the end of World War II. Hence, the concern of some authoritative scholars of a possible delegitimization of the Republic of the parties, in the case of recognition of a «civil» nature of the clash 43-45. Actually the rethinking of the 43-45 biennium in terms of a civil war, helps to better understand its dimension as a period of refounding of the political and social order, giving us the novelty of the anti-fascist political proposal. Which, in the context of «international civil war» began in 1914 and destined to end in 1945, is presented as being a different kind of answer to the problems of mobilization of the masses and of the public organization of economic life, combining social rights and political freedom, in clear and sharp alternative to fascist experience, tending to solve the same lump of problems through the creation of a totalitarian State and subverter of the world peace.

The State of Emergency
Political violence has had a very accurate representation in the history of our Republic. This paper has tried to highlight how the continuity line between the two decades of sixties and seventies has been very marked, though history has often referred to the seventies as a period of terrorism and has absolved them as the decade of movements. This study tried to prove how the violence of the seventies took its incubators in the previous decade, and the events connected to the Workers Power and its transformation in Organized Autonomy Workers have been its emblem. It was also interesting to see how the State’s response to the climate of terror, which spread in many Italian cities, has raised strong protests in some sections of the Italian Parliament and the public opinion. Guarantee and justice followers, an old controversy that still keeps a deep impression.

A Civil War of Long Duration. Political Violence in a Country with «Advanced Capitalism»
This essay deals with the link between political violence and the fear of the Perfect Totalitarianism during the 60’s and the 70’s in Italy. The fundamental issue during that historical period was the obsession of the new generation to give back centrality to the human being. In fact, the transformation of Capitalism, during the 50’s, into the so called Neocapitalism, seemed characterised not only by the growth of the production of goods, but also by the capacity to absorb every form of antagonism through the mythology of well-being, the expansion of consumption and the increase of salaries. Capitalism had at its disposal much more powerful weapons than in the past, because it was able to conquer the minds of people, to model them according to their needs, to build a tailor made man. The essay seeks to answer the following questions: why a large part of the young generation had a completely negative judgement about their present time and why they wanted to change the world? Why Politics seemed to them the right tool to free themselves and the others, so as to gain back the inner harmony that had been destroyed by the contemporary society? And, lastly, why political violence appeared to them a necessary instrument to accede to the authentic life?

Lower Middle Class and Circuits of the «Nation». The Case of Terra d’Otranto between the 1820s and the Unification
The paper joins the current debate on nation building during the XIXXX centuries and on the state-building processes in Italy, with particular reference to the relationship between Mezzogiorno and Risorgimento. It examines the politicization channels activated in the ancient province of Terra d’Otranto (corresponding to the present provinces of Brindisi, Lecce and Taranto) between the 1820s and the Italian unification of 1861. The paper includes a selection of various sources– such as a number of political trial acts from Lecce State Archive, the documentation about the exiles in Sardinia Kingdom from Turin State Archive, some letters to Garibaldi from Rome Risorgimento Archive and contemporary press sources. In this perspective, the essay focuses on three crucial moments to understand the concrete terms by which this area of Southern Italy got involved in the unification: the political struggle matured around 1848, the experience of exile after the failure of the revolutions of 1848 and the national myth of Garibaldi built around 1860. Particular attention is paid to the relationship between the lower middle class (especially artisans and small traders) and the national cause, that reveals some mechanisms of full but often complex and conflictual participation.

The End of Revolution. The Making of History in the Italian Social Movements of the 70s
This article focuses on the Italian social movements of the 70s in order to grasp a crucial transformation in the conception as well as in the way of living the making of History. This transformation consists in the crisis of the 20th-century idea of «Revolution» like horizon of expectation. The author points out three major factors contributing to such a transformation. First, the change in the conception of «working class», which is observed in the various components of the Operaism. Second, the rise of the Feminist principle «the personal is political» far beyond the Feminism movement. Third, the criticism and new articulation of the equivalence between power and government bodies. As the author underlines, this transformation is far from being linear. This is what he shows by analysing the controversial status of the Political violence with reference to the riots and their political interpretations in this horizon characterised by the disappearance of the 20th-century idea of «Revolution». Finally, the author examines the contemporary debates occasioned by the most important political pop festival of the decade – the «Parco Lambro (Milano), 1976 – and the contradictions that this event brought to light.

The Mantle of Merlin the Magician
The article is a review of the book of Tommaso di Carpegna Falconieri, Medioevo militante: an essay which analyzes the current political use of Middle Ages. The instrumental use is favoured by the fact that the historical concept of Middle Ages fades against a distorted and generalized view, built with recourse to stereotypes that have been consolidated during the nineteenth century.

«Le premier homme» of Gianni Amelio
The last Gianni Amelio’s picture, Le premier home, based on the unfinished novel by Albert Camus, is more an autobiographical narrative than a mere cinematic adaptation. Facing Camus’ text, it is as if Amelio had recalled its previous attitude towards the South (not only a historic and geographical notion, but also a way of «rubbing history against the grain»). If the novel goes back and forth from present to past, the film is necessarily set in a «double past»: the 1957 of the main character’s return home, and the flashbacks about his childhood. The evocation of the past is achieved through a few elements, in an almost ascetic mood. In doing so, Amelio puts a greater distance from the historical background, and at the same time he puts himself on a more philosophical level. The South, for both Camus and Amelio, is a point of observation where considering the limits of History and Progress. But in Le premier home Amelio’s attitude is more reflexive, even sad: as if the South couldn’t be a place of hope anymore.