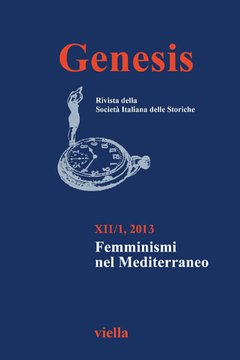 Early Reflections of an Historian on Feminism in Egypt in Time of Revolution
This article investigates the spaces of the emerging informal feminist activism, reading from the events that occurred between 2011 and 2013 in the wider context of Egyptian XX century’s history. The article argues that the diverse forms of independent feminism which Egyptian women have experienced all along the XX century, including intellectual and transnational activism, form the background of the 2011 Revolution, and of women’s contribution to it. It therefore contributes to current discussion on the significance of feminism in the history of Egypt, suggesting that contemporary women’s activism is both revolutionary and part of a longue durée historical process.

For a History of Turkish Feminism: the Experience of the Association of Progressive Women (İkd, 1975-1980)
The history of Turkish feminism is characterised by a 45-year-long silence elapsed between the feminist campaigns and activities during the last phase of Ottoman period and the first years of the Republic on one side, and the rise of a radical and active womens’ movement in the ’80s on the other. The article explores the history of the Progressive Women’s Organization (İkd) founded in 1975 in order to investigate the political background, the discourses concerning women and feminism produced by leftist organisations and the characteristics of women’s political participation in the late ’70s, the years just before the vibrant eruption of the second wave of Turkish feminism.

The Women’s Movement in post-Saddam Iraq: between Gender, Nation and Religion. Legacy of the Past and Challenges of the Present
This article presents Iraqi Women activism through a socio-historical reading that begins from the formation of the first Iraqi Women Association. It recounts the gender politics of the ba’ath regime since its came to power and the evolution of gender politics and women’s condition from the 1991 events and the imposition of the sanctions. Relying on an ethnography of the post-2003 Iraqi women movement, it presents the reality of women activism in post-Saddam Iraq especially in the context of the drafting of the new Constitution in 2005 and the controversy around the article 41 that deals with the Personal Status Code.

Islamic Feminism: a Plural History
Since the beginning of the ’90s from Iran to Egypt, from Turkey to Malaysia, from Europe to North America, began to establish a women’s movement, called Islamic feminism, fighting for the rights and freedoms within a religious framework. On the assumption that the misogyny in the Muslim world is the product of patriarchal readings of sacred texts, and not a limitation of the Koran, a growing number of activists and theologians called for a reform of codes and institutions that discriminate against women on the basis of feminist interpretations Islam. This paper traces the history of the movement by focusing on the Mediterranean area and in particular on Morocco.

Femminisms in Morocco between Gender Politics and Social Movements. Some recent Developments
The aim of this paper firstly is to present the relevance of the feminists’ claims for the democratization process of Moroccan state and for the contemporary development of social debate about freedom, justice and human dignity. Also thanks to some ethnographic materials, collected during the author field work activity curried out doing researches in Morocco during last five years, the article describes the main issues of women’s discrimination in the country and the interaction between gender politics and feminist movement from the post-indipendence period until today. It proves that in different ways and self-representations, feminists and non feminists, Muslim and non Muslim women, are re-defining women’s roles and rights in contemporary Morocco, being subjects of their own “re-making” not only in political arena, but also in cultural and social sphere.