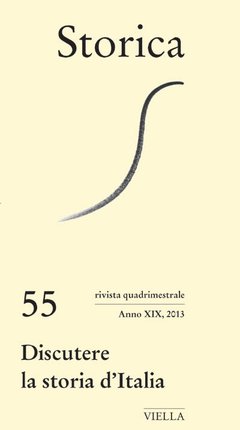 History of Italian literature and History of Italy
The essay reconstructs the longue durée of De Sanctis’s legacy in the Italian pedagogical tradition, showing the extent to which his Storia della letteratura italiana has permeated the relationship between literature and national identity in Italy, even when it was simply reasserted, or betrayed. Things have changed since the 1990s, especially with the advent of media power in politics, but Italians continue to be educated within the mythology of a literature that constructs the nation, which stems from De Sanctis’s lesson: is there any way to make a step forward without renouncing the privileged position of literature in the formation of Italian public discourse?

The essay critically examines the origins and the explanatory value of the commonplace according to which some Italian «evils» would be tied to the excessive weight of family solidarity which, in its degenerate form, originated a long-lasting structure, i.e. «familism». Such an idea is reinforced by the dualist representations of Europe which – since the studies of the Cambridge group in the 1960’s and subsequent variations – contrasted a Mediterranean area characterized by an extended family and a young age of marriage, less modernized, with a North-Western reality characterized by a precocious affirmation of the nuclear family and a later age of marriage, the driving force of economic development and competitive individualism. The author complicates and falsifies such a picture, pointing out on the one hand the absence of a unique Italian family model and the diffusion of the nuclear family in Southern Italy only; on the other hand – on the basis of women’s studies – the importance. in the history of Italian society, of further elements, relatively independent from family morphology: e.g. family and patronage ties, the weight of primogeniture, the role of the dowry, the sharecropping character of agriculture. If we want to find out the significant elements of the Italian «peculiarity», these are more likely to be found in the long-lasting political and cultural role of the Church in the countryside, and the low level of literacy and information.

Intellectuals between the Enlightenment and the Novecento

The paper explores recent trends in the legal and historical culture of both Europe and the Anglo- American world. Attention has turned, in Italy and elsewhere, to the constitutional dimension of private law, to collective properties and to the dynamics of the commons. This essay also analyzes, through the lens of legal and constitutional history, the dialectic between the bourgeois individualistic model, postulating the absolute power of the individual over goods, and the structure of collective properties (medieval and modern) based on the primacy of the community and the res. It eventually seeks to test the role of this dichotomy in contemporary society characterized by the crisis of modern legal forms and the emergence of alternative categories – such as, precisely, that of «the commons» – in order to rethink the foundations of democracy.