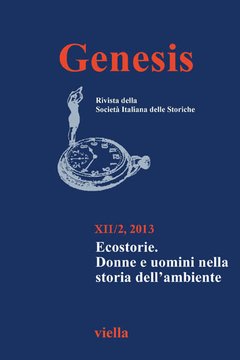 Women and Men in the Protection of Birds: a Comparative Analysis
In many Western countries organizations dedicated to the protection of birds appeared during the second half of the nineteenth century. Just prior World War I, tens of thousands of people are members of such organizations in English and German speaking countries. These organizations share several characteristics particularly the existence of a majority of women and a discourse denouncing the cruelty and selfishness which prevailed in the destruction of birds. In addition, scholarly ornithological organizations gradually opened to women. Under the dual influence of women activists and women scientists, the practice of ornithology evolved, gradually abandoning hunting in favor of the observation of live birds in their natural environment.

Italy as a Mother, Africa as a Concubine. The Feminization of the Lands within the Colonial Discourse of Fascism
The article analyzes the discourse spread out by colonial journals from the 1920’s until the late 1930’s, in order to investigate the role played by a representation used in Fascist propaganda: the depiction of Italy like a mother and Africa as sexually available woman. The gendered representation of lands is borrowed from the European colonial culture and it goes along with the description of the Italian male colonizer as the only subject of the colonial process. The article analyzes how this discursive construction changes during the “Ventennio” and how it justifies both the African land use by colonizers and the reproduction of a conservative and unequal society within the colonial territories. At last the article read the gendered representation as a part of the wider Mussolini’s project of building a new, fascist society.

Women on the Border of the Empire. Feminine Spaces in the Agricultural Colonisation of Tunisia
The essay foregrounds the experience of Jeanne Ballet (née Trouillet), a settler’s wife in colonial Tunisia after WWI. A socially engaged Catholic, Jeanne Ballet contributed regularly to the review «Ibla» with articles on rural environment and native habits. Driven by a modernising mindset, Jeanne Ballet shared the taste for order and discipline of her contemporaries, as well as the paternalism then in vogue. Particularly sensitive to women’s issues, she emphasised the potential of both European and Tunisian women, thus moulding a substantial role for them as pioneers of change.

Seveso 1976. The Dioxin on Women’s Body
The Seveso accident of July 10, 1976 condensed in an inseparable knot problems which were to be discussed in the following decades: environmental protection, civil rights, ethical issues about life and gender. The disaster set off a battle on the female body and showed how women – as holders of the biological mechanism of generational reproduction which could be seriously affected by toxic substances and environmental imbalance – were the most involved, more delicate and less protected subjects in cases of chemical contamination.

Marriage, Motherhood and Masculinity in the Global Economy: is There an Emerging Crisis in Social Reproduction?
Naila Kabeer