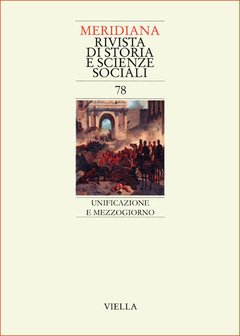 Global Crisis and Civil Conflicts. New Researches and Historiographical Perspectives
The end of the Kingdom of the Two Sicilies is an episode of the revolutions that change the face of the Atlantic and the Mediterranean, as well as the process of the formation of modern nations. In this way the crisis of the Kingdom of the Two Sicilies can be interpreted inwardly the history of the immense geopolitical area, that ranged from the Naples to Bogota, and from Madrid to Buenos Aires, the heir of the Great Empire of Charles III. The Bourbon monarchies experienced a deep crisis in the Nineties of the Nineteenth century, imploded during the Napoleonic Wars. The process has fragmented powers and institutions, and was not stopped with the Restoration. This is because it was continued first in the contest between liberalism and absolutism, and then in the old and new countries, with the conflict among different national projects, although marked by start, duration, development and different conclusions that give life to the new states on the ashes of the Great Empire. The perspective of the conflict, therefore allows to insert the new studies and current research on the South Italian Risorgimento inside of the large international debate on the Atlantic Revolutions and the connection between the Civil War and the formation of modern national states.

The Revolution of Naples of 1848. Sources and Methods for the Study of Political Participation
The essay reflects on the political mobilization in Naples during the revolution of 1848. The historiography on the Risorgimento has paid scarce attention to this theme, considering Neapolitan street politics lacking of a massive popular participation. With the aim to retrieve the large extent of the Neapolitan «square», and to explain how it was able to influence the revolutionary government, this study focuses on the real meaning of the word «participation» as perceived by the mid-nineteenth century observers. First, the police registers, the coeval journals and memorials will be analyzed to demonstrate how common opinion considered liberals or liberal supporters, including not only those who demonstrated and wrote of politics, but a larger part of the urban society traditionally considered as passive: the observers of the demonstrations, the readers of liberal journals and people talking informally about the revolution in coffeehouses and in the streets. Secondly, in order to show how many urban groups alien to the political debates were involved into the revolution and finally participate to it, the specific case of the national guard will be illustrated.

Documenting Dissent. Personal Identification System and Political Control (1815-60)
The essay analyzes the relationship between the documentation of individual identity and the political events which involved the Kingdom of the Two Sicilies in the period between the Restoration and the Italian unification. Procedures for individual identification and a sophisticated documentary apparatus of identity and travel cards were introduced in the Kingdom of Naples by the French kings during the Napoleonic domination. After the return of the Borboni dynasty, the evolution of identification practices, which was one of the fundamental components of the state-building process in 19th century, crossed a particularly delicate political situation. The article reconstructs how, starting from the Restoration, police measures were deeply shaped by political fears rather than on the purpose of improving the identification system. Furthermore, the essay shows how identification techniques and police knowledge were developed and consolidated in the Risorgimento moment, and consequently how the Neapolitan state could count on them to control subjects and foreigners on its territory.

A Middle-Class Revolutionary Institution: The National Guard in the Italian Mezzogiorno (1799-1861)
This article intends to contribute to the reconstruction of the Risorgimento movement with a double aim: to put in evidence the southern situation, not deeply investigated, and to adopt a long time perspective. In fact, this work analyzes the introduction of National Guard (N. G.) in a such complex reality as the Italian Mezzogiorno and the function that liberal southern movement attributed to this institution in the period of revolutionary caesuras from 1799 to 1861, that is from the Neapolitan Republic to the Italian Unification. During the Italian Risorgimento the N.G. has had an important role, surely much more than historiography reveals. So far the fundamental contribution that the N.G. has given to the birth and the development of the Italian southern liberal movement has been neglected, wrongly considering it as an institution strictly finalized to the public control. From the Republican Triennium, the forces interested to the political change saw the N.G. as an institution where the principles of the French Revolution were met. For this reason it can be defined as a middle-class revolutionary institution. Fidelity to revolutionary and national-patriotic ideas, profit and properties, were all elements that characterized the institution. To all this it can be added an innate repugnance towards that part of population which constituted the lower classes and which frightened the liberals so much as the absolute power of the Crown. The N.G., in short, faithfully reflects all the phenomena and the potentialities of the Italian Risorgimento together with its limits and contradictions.

The Politicization of the Camorra. The Police Sources in Naples (1848-1860)
The article describes the politicization of the Camorra in the first half of the nineteenth century using the police sources of the1840-60. These sources show an increasing occupation by the phenomenon of Camorra, which spreads from prisons and gambling in some markets. There is a documented negotiated systemic co-management of the public order between the police and the Camorra. But with the constitutional uprisings of 1848 there is a significant politicization with a liberal orientation in particular the Camorrists of the market, that is present even in some prisons revolts. This politicization will cause from a side, an important separation (with a following contrast) between a pro-realistic and a liberal Camorra; from the other side, a greater attention of the police authorities for this specific criminal group. Throughout the fifties of the nineteenth century this process increases until the famous cooptation in the Guardia cittadina by Liborio Romano in 1860.

«Con il drappo tricolore cinto intorno al saio»: The Salernitan Franciscans in the Unification Process
Among the religious orders in the Southern Italy during the Risorgimento, Capuchins friars represent a peculiar study case, because of the special relations they regularly had with the lower classes in those rural areas, as well as for the pro-liberal positions they took during the liberal insurrections of 1848. After the Italian unification and the extension of the Piedmontese law to the whole newborn Kingdom (namely, the strictly extensive application of those decrees concerning the suppression of the Religious Orders), just few of these liberal friars, commonly labeled as plotters within the Roman Curia, shifted to pro-Bourbonic positions, while the most part kept pro-unity feelings. This essay analyzes in detail the figure of Giovanni da Pescopagano, a Capuchin friar operating in Sala Consilina, within the Province of Salerno. Similarly to other friars in this area, like the Franciscan Romualdo da Sanseverino, Giovanni da Pescopagano deeply supported the «national struggle» since 1848. Despite the opposition coming from the Vatican circles, as well as from the Order General Friar, but thanks to the support of the civil authorities, he was made Provincial Friar for Salerno and Basilicata in 1861, carrying out a strategy of fruitful cooperation with the State, and becoming a landmark for those clergymen who contrasted the reactionary attitude of the Vatican. Therefore, this «case» constitutes a vivid example of the cleavages provoked, within the Catholic Church, by the «civil war» fought for the unification; as well as, the marginalization that Giovanni da Pescopagano was subject in the second half of the 1860s, demonstrates how the realignment which followed the «Convenzione di Settembre» took place under the auspices of the political and ideological moderatism.

A Sicilian «Notabile» for Liberal Italy
The article analyzes the biography of a baron of Vittoria (Sicily): Salvatore Contarella. He is a liberal who takes part in the revolution of ‘60, member of «Sinistra storica», follower of Francesco Crispi, winemaker pointed to innovation and market. The noble is considered as part of a large group of «notabili» that – after the italian unification – engage in a revival project of «Mezzogiorno» in a more general process of change for the whole country. They identify solutions for modernizing their territories: transports, measures for agriculture and initiatives to promote the process of nationalization.

«Con l’armi nuove della politica». The Bourbon Exile and Its Conspiracy Strategies
The Bourbon exile after 1860 is different from the democratic and liberal exile before the Italian unification: this one is in fact an «hierarchical» exile, with the presence of a government in Rome, with the presence of the king Francesco II, with a diplomatic system. Between 1860 and 1866 these elements organized armed expedition against the former kingdom, but these initiatives joined political strategies of modernization, through the promise of the Constitution to the Reign, through the promise of construction of infrastructure, through the Neapolitan Nation building based on propaganda. Sicily was also a strategic platform in view of the restoration of the rightful king: the island was filled with clubs who worked hard to build a network of Mediterranean legitimists. The 1866 war and the revolt of Palermo closed this political phase, but many of these issues converged in the complex Southern Question.

The «Uomo qualunque» in Sardinia
The paper revolves around the political movement of the «Uomo qualunque» in Sardinia. It focuses on the articulation of one of the three faces of political parties as described by Katz and Mair: the party on the ground. In particular it puts the emphasis on the role of leaders and regional notables and their relationship with the party in the central office. Using prefetti’s reports, the «L’Uomo qualunque» newspaper, oral and written memoirs of some of the most important Sardinian members of the Uomo qualunque as its primary sources, the paper aims to reveal the most peculiar aspects of this party in Sardinia. It also considers the electoral geography in 1946 and 1948 political elections and in 1946, 1952 and 1956 local elections, stressing on the differences concerning the urban and rural areas. It also considers the connections between the Uomo qualunque and other political parties, especially Democrazia Cristiana and Movimento sociale italiano and the political patterns of qualunquisti notables after the dissolution of the party in 1948. Finally it points out the Uomo qualunque’s view on Italian autonomous regions with special statute.

Danilo Dolci and Leonardo Sciascia. Critical Views on Violence and Non-Violence in Sicily
Leonardo Sciascia and Danilo Dolci, two of the most important Italian intellectuals, have lived and operated in the same zone in Sicily for a long time, analyzing the same enemy, both writing on that kind of violence traditionally called «mafia». Nevertheless, they didn’t agree with each other on the method to be used for people’s emancipation from such Sicilian drama. Sciascia is persuaded that try to solve Sicilian violence by non-violent methods, as Dolci supposes, is an illusion. Dolci, on the contrary, believes that non-violence is actually the only solution to face it. Understanding this dispute can stimulate our points of view on the Sicilian history of violence, prevalently identified with that organized shape of violence better known as mafia; but it can also encourage our perspectives and purposes on non-violent action and researches.