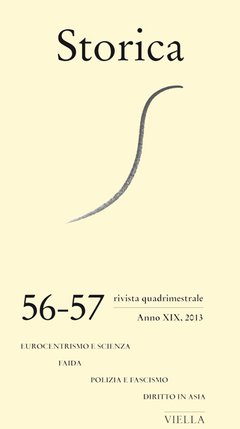 Eurocentrism and Scientific Modernity Narratives. Three Proposals to Provincialize Europe
If we assume the transitional adequacy of modernity as a historical and epistemological framework, we must understand what role different narratives of modern science play within the contested space of modernity. What scenarios appear if we couple such narratives of modern science with the entangled inter-societal, polycentric cartography of existing intertwined geo-historical locations relationally constructed at the global scale? From this vantage point, I consider three perspectives in the debate over «science and modernity», taking the critique to Eurocentrism as a theoretical assumption: Arun Bala’s dialogical history of the Scientific Revolution, Susantha Goonatilake’s proposal of a Global Science, and Benjamin Elman Sinocentric history of science. It is my contention that even these radical, revisionist and innovative perspectives about the relation between science and modernity remain caught in a normative-explanatory trap. Such a trap is the sfrom which has the.

Feud and blood feud between customs and legal process me
Like other topics, the studies on feud were subject to the classic disciplinary subdivisions consolidated in the last decades of the nineteenth century. The relationship between judicial practices and the feud is relevant both in customary systems and in systems governed by the legal process, but the crucial transition from customary practices mainly handled by the community (prevailing in the early medieval age) to practices and procedures managed by professionals (lawyers) remains underexplored. This essay examines the research conducted on single European areas and on different historical periods (although particularly the early and late Middle Ages and the Early Modern era), as well as the various disciplinary approaches employed. In reality, while focusing on the relationship between the spread of violence and the need for peace, the discussion on the subject of feud in Europe has paid little attention to the role played by the spread of Roman canonical procedures and the mediation carried out by lawyers, both in their theoretical work and their judiciary practice. This trend is also visible in studies on the early modern period, as the intense dynamics of social violence and the decisive interventions of state powers have not yet been adequately referred to the changes that took place in judicial proceedings. These transformations were relevant and even decisive, especially after the introduction of strict inquisitorial rites, which took away from the privileged classes the prerogative of independent resolution of conflicts and the traditional management of legal procedures. The assertion of a new form of punitive justice which aimed to affirm new forms of social control, as well as the role of the victim and its weak procedural configuration, attest to the weakening of ancient forms of justice that regulated the feud.

Fascism and apparatuses of public security: the case of Sicily
This paper retraces the role and the evolution of the apparatuses of public security in Sicily during Fascism. First, I analyse Cesare Mori’s campaign against the Mafia in the second half of the Twenties, which exemplifies the transition from the liberal to the Fascist period, because in many respects the same methods were employed before and after the change of regime. Second, I consider the new repression of the Thirties, which shows the evolution of apparatuses modelled on the secret police named Ovra. Finally, I examine the period from Fascism to the Republic, pointing out the many elements of continuity, particularly in police personnel. Fascist security forces gradually broke away from their role and structure during the liberal period and became an instrument of the Fascist regime’s totalitarian project. Second, the security forces’ paramount aim became more important in border zones and peripheries (not only in Sicily, but also in Sardinia, Venezia Giulia or South Tyrol), which seemed removed from the Fascist utopia of a unified and homogeneous national community. There more than anywhere else, Fascism adopted extraordinary measures to manage public security, because such measures were part of the regime’s centralizing project to raise the level of sovereignty and the presence of the state in the peripheries.

Rethinking Law and Institutions. Europe and Asia in the modern era
This article reconsiders how the Montesquieuan myth of «Oriental despotism» has influenced until today Western approaches to the study of Asian forms of political power. Discussing recent literature on Asian Empires, the author suggests that an emancipation from that myth is necessary, in order to achieve not only a history «on equal terms», but also a better understanding of both the European and Asian political institutions.

The Commune of 1871 between History and Myth
This paper is a review of debates on the Commune of 1871 which have followed the Centenary celebrations. Although classical problems remain central, new and more specific questions have arisen, owing to the interdisciplinary contribution of social sciences and the changes of historical approaches and methodologies.

Readings of Jewish history. Reflections on some recent texts
The article offers a discussion of different publications on Jewish history through the lenses of Yosef Hayim Yerushalmi’s famous lecture, Servants of Kings and Not Servants of Servants: Some Aspects of the Political History of the Jews, which has been recently translated and published in Italian (Florence, Giuntina 2013). That lecture delved into the relationship between Jewish history and political power. According to Yerushalmi, Jews often entertained a privileged relationship with royal power or established a «royal alliance» with kings and princes (at times with the Church as well). This article reviews this vision of Jewish history, which somehow challenged Arendt’s notion of the Jewish people as powerless, and situates it alongside recent publications on Jewish history that focus on the complex historical relationship between Jews and Gentile.