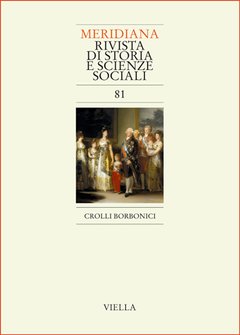 Sovereignty, Wars and Nations. The Crisis of the Bourbon World and the Formation of Modern States (1806-1920)
The prospect of war provides a common ground to analyze the collapse of the Bourbon world and to understand some of its original characters. The deep crisis of legitimacy of the monarchies broke the secular monarchical tradition. The internal conflict, and often the Civil War, became the main instrument to face and resolve alternative options-state and to reach the final affirmation of national buildings, in a context marked by many elements of homogeneity but through different paths. The study of war allows us to move the prospect from an inside story to national events to broader interpretive schemes, using the growing interest of the social sciences on these issues, the relationship between conflicts and the processes of state-building, but also to understand the reasons of the subsequent removal of the same conflicts to build national myths. The paradigm of the war can also contribute to a more successful placement of the national debate, stripping off the recurring rhetoric of the study of South’s participation in the construction of the Italian state.

Imaging a Nation on the Ruins of a Monarchy: New Spain/Mexico
The article analyzes the process whereby the Mexican nation was built within the framework of the dissolution of the Bourbon imperial system and replacement of a State-Empire with nearly twenty new nation-states. This process was notable for how quickly it occurred: starting as a problem that was virtually nonexistent at the beginning of the imperial crisis, in ten short years it emerged as a series of declarations of political sovereignty unmistakably national in scope and covering the entire continent. In the case of Mexico, two alternate national projects were destined to clash and to influence the political life of the new nation-state until well into the second half of the nineteenth century. Special attention is given in describing the features of both projects – liberal and conservative – and also the historical accounts underlying them: in the case of the liberal project, a stage of birth (the pre-Hispanic era), death (the Conquest), and resurrection (Independence). And, for the conservative one, a metaphor alluding to a family, wherein the son who reaches adulthood abandons his parents’ home in order to take his place among the nations of the world.

Counterrevolutionary Wars in Spain: 1793-1840. From International Conflict to Civil War
The French Revolution laid the European monarchies in front of a new challenge: coping with a people’s army. In response, the Spanish monarchy generated a widespread mobilization that backed onto a precise idea of monarchist counterrevolutionary patriotism. This same mobilizing argument was successfully recovered in 1808 to fight against the French invasion. In the Courts of Cadiz, meanwhile, a new formula of patriotism had crystallized, liberal patriotism, that questioned the directed absolute sovereignty and proclaimed, at the same time, the rights of citizens. From the distance between these projects, the germ of a civil war will be born that had a first episode in 1822-1823 and exploded in a large scale with the first Carlist War of 1833-1849. In Spain, the counterrevolutionary fight was kept alive for forty years, but the one that was initially an international war against the French revolutionaries, had come to turn into a civil war against the Spanish liberals.

The Revolutionary War of Sicily. Constitution, counterrevolution, Nation 1799-1848
In this paper we aim to discuss the conflict between Sicily and Naples in the nineteenth-century. Using historical and historiographical categories of counter-revolution, constitution, and nation, we try to figure out why the Bourbon kingdom collapses in Sicily. The protagonist of three revolutions (1812, 1820 and 1848) and an endless series of confrontations and violence, two projects will come from the island National Anti-Neapolitans. The first was the loser of the «small country» Sicilian, the second was the winner of the «great nation» Italian.

In Search of a National State. Wars and Colombian State in the Nineteenth Century
The wars during the 19th century were characterized by the constant attempt of the establishment of a State in Colombia, a goal that has only been achieved during the last war of the century, known as La Guerra de los Mil Días. These series of wars showed the failed attempts of the governments to achieve the territorial control, the violence and weapons’ monopoly, the national collection of taxes, a comprehensive economy and appropriate infrastructure that connects the national territory. These lacks forced the governments to search the acquisition of international credits as a mechanism in order to accomplish the operation of its bureaucracy. Likewise, these wars reflected the local identities instead of a national scope because these provinces could not establish an economical and military control over others. Under this complex and particular perspective, the internal violence and political disagreements were developed during the 19th century, while the establishment of a Colombian State was searched.

Patriotic Systems: times and spaces of national identities
The crisis of legitimacy that characterized the Bourbon’s monarchy in the late eighteenth century and the first half of the nineteenth century, interpreted taking into account suggestions historiographical influenced by postcolonial studies, leads to consider the circularity of the Europe – America, in the Mediterranean-Atlantic patriotic system, between revolutionary processes and achievements of independence. Spain, the colonial world and the Kingdom of Naples appear connected through emblematic figures of exiles, such as Horace de Attellis Santangelo and Peter De Angelis, expression of different ideological choices, challenged by the unprecedented perception of space in which to interpret and qualify the cultural and political militancy.

Another Rebellion? The Participation of the popular sectors to the Spanish-American Wars of Independence
The participation of the subaltern groups to the Spanish-American independent movements is at the centre of this article. Though historiography has always underestimated their contribution to the wars that liberated Spanish American territories from Spain, subaltern sectors (indigenous, free coloured people and slaves) played indeed a very important and active role during this period. Not only they participated to the armies that defeated the Spanish, but they also had significant political objectives to be attained. Like the elites, they understood that the collapse of the Spanish monarchy opened some possibilities of action that were unimaginable before 1808. Wars led de facto to an improvement of the social and political conditions of popular groups: for the free coloured meant the access of citizenship; for slaves, the acquisition of freedom; for the indigenous people, the defence of their lands.

Carlo e Filippo Piscane. A «Private Civil Conflict» in South Bourbon
The question of the participation of the South to the construction of the Italian nation-state is, even today, at the center of the historical debate. Within the Kingdom of the Two Sicilies, liberalism and pressures unitary confronted with the structures and policies of the Bourbon monarchy. Using the correspondence between the brothers Carlo and Filippo Pisacane [1847-1855], one «Italian», the other legitimist, the article traces the existence, in the private sphere, of a triangulation between war, homeland and family dynamics and personal. The conflict becomes, therefore, crucial to understand the determination of afferents and political affiliations.

Imagine the Revolution. Italian Exiles in Malta and the Southern Initiative for the Risorgimento
In the nineteenth century, many democrats and conservative liberals lived in Malta during their exile from the Italian pre-unification States. The freedom of the press and the proximity to the Kingdom of the Two Sicilies made the island a strategic launching pad of the revolution, especially after 1848. Through the use of sources from Italian and Maltese archives, the article tries to reconstruct the role of the Maltese node in the network of the Liberal Italian exile.

Tramonti’s Children and the «santa pizza». Social Networks and the Cultural of Migration in the Internal Migration
This article presents the first results of a historical and anthropological research conducted among the migrants from Tramonti, a little town of the Amalphitan Coast. Since the 1950s, thousands of people have left this village for the North of Italy, where they have found work mostly in the restaurant business as pizzaioli. The case of the pizzaioli from Tramonti contrasts the received wisdom about Italian internal migration, revealing a migratory flow whose features depart from the mainstream of migrants seeking factory jobs, since it consisted of independent workers in the tertiary sector. The essay focuses on the working and on the cultural dimensions of migratory networks, using interviews and biographical reconstructions as its main sources. These life-stories highlight the importance of both translocal connections with the village of origin and of the culture of migration in fuelling the decision to leave for the North, through a mechanism of call and emulation. This kind of socio-cultural factors has often been neglected in the macro-analytical description of internal migration in Italy, although they are crucial to fully understand specific migratory patterns. The aim is thus to contribute, on the one hand, to a deeper awareness of the social and cultural dimensions of internal migration, and on the other, to the dialogue between social anthropology and the history of migration.