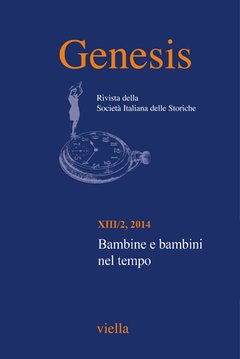 Introduction
Since the 1960s, the experience of childhood across time has emerged as an important field of historical research. Historians’ engagement with the children of the past has revealed the complex and multifarious meanings of childhood and the very different experiences associated to this phase of life in different historical contexts. Throughout history, gender has represented a crucial dimension of childhood, and our main aim here was to explore how boys and girls have been understood and socially constructed through time, giving particular attention to the role of play, toys, and children’s literature. In this issue of «Genesis», we try to explore the crucial relationship between the effort of regulating children and the “agency” that children are able to express, particularly in the context of a children’s peer culture, in which play (broadly understood) has a central role. In the Introduction we discuss possibilities and limits of the attempt to examine how gender norms and gender models have been formulated and propagated through play and literature and we interrogate how those models have been appropriated, contested and subverted in different historical, geographical and cultural contexts. We argue that gender and childhood provide us with a critical perspective on the past essential to the understanding of broader processes of cultural and political change and we discuss the specific challenges and possibilities of the effort to recover the voices of the children of the past.

Training for adulthood: gender in nineteenth and twentieth-century children’s books in Australia
Using children’s literature as a historical source, this article will explore the way that nineteenth and early twentieth-century children’s literature inculcated and reinforced particular cultural and social viewpoints. My consideration of the discourses employed in the literature analyzed in this paper, will demonstrate how literature for children constructs gender and life roles, providing models, values and meanings for child readers. In this process, children are being formed and trained for the parts they will play in adult life. In addition, discourses on gender intersect with a range of other discourses, on heroism, on class, on education and religion, for example. Such books thus give today’s readers valuable insights into cultural and societal constructs and what was deemed suitable for children of the time.

«Don’t Play with Fire!». Italian children, redefinition of male gender identity and the campaign for toy disarmament (1946-1956)
This paper analyzes the struggle to forge a new male gender identity fought in postwar Italy; it explores in particular the attempt to counteract the militarization of the child that had been promoted by the fascist regime through a relentless media campaign for the disarmament of toy weapons. In a country engaged in the effort to recover from a devastating war, with a high rate of children killed or injured by unexploded ordnance, the fight against the proliferation of toy weapons acquired a high symbolic value. It was a struggle – as happened also with comic books and cinema – conducted on several fronts and by organizations located on opposite sides of the political spectrum: both Catholics and Communists, and their respective women’s organizations, in fact, pledged to boycott the so-called “war-toys”; against their efforts, the trade associations of the toy industry sought to defend their products, declaring their harmlessness and presenting them as a possible driver of national economic recovery. In the background of this clash hovered the specter of the Cold War and the arms race, together with the raising of peace movements of different kinds. In all its different and contrasting aspects, the struggle over toy weapons marked the desire to definitively put aside balilla and sciuscià, to build a new and democratic model of childhood.

Girls, boys, and talking animals: Eduard Uspeenskij and the last soviet generation
The article discusses the transformation of the models offered to Soviet children between the late 1960s and the late 1980s, through an analysis of the work of Eduard Uspenskij (b.1937). Uspenskij is one of the main representative of Russian folk tales tradition and his tales provided a strong critique of adult society, described as distracted and indifferent to the most important aspects of life. The article is divided in four parts: the first discusses the historical and ideological context of Uspenskij’s literary production and the literary canons characteristic of Soviet childhood literature. The article moves then to analyse three of Uspenskij’s most representative works: Gena the crocodile and his friends (1966), Uncle Fëdor, his dog and his cat (1974), The School of fur animals (1989). The three stories have as main protagonists children and talking animals and are particularly useful to illustrate, showing in particular the important symbolic role that was recognised to girls in the stories. In his efforts to renew childhood literature, Uspenkij attributed a particular important role to girls, as mediators between the world of humans and the world of animals. The three stories also illustrate the ability of Uspenskij’s children to redefine the boundaries between public and private, through real and imaginary travels in search of new subjectivities.

Discipline and educate. Gender roles in East German fairy tale films
The fairy tale films of the German Democratic Republic (East Germany, or Gdr) belonged to one of the most important cultural and educational productions for children’s entertainment and edification. Made with live actors, romantic sets and familiar plots, these colourful films enchanted children and their parents for almost a half-century, providing young and old audiences with role models of good behaviour and warnings about the perils of straying from the path of (socialist) virtue. These films also offer us insight into how cinema functioned as a discursive socio-political space in the GDR. In this article, I focus on the portrayal of acceptable gender roles in the fairy tale films of the GDR’s stateowned film production company Defa (Deutsche Filmaktiengesellschaft), looking in particular at three films produced in three key historical periods (pre-Wall, post-Wall, and the last stages of socialism), Das singende klingende Bäumchen (The Singing, Ringing Tree, 1957, dir. Francesco Stefani), König Drosselbart (King Thrushbeard, 1965, dir. Walter Beck) and Die vertauschte Königin (The Bartered Queen, 1984, dir. Dieter Scharfenberg). This selection of films demonstrates the possibility of using children’s films to understand broader societal changes and the relevance of a gender perspective to the analysis of the Gdr.

Children’s right to play in XVIth century Venetian painting
Playing is a inherent activity for childhood. Yet, in 15th or 16th century Italian painting, games are hard to notice, especially when children are concerned. This difficulty leads to the absence of studies about children’s way of playing. Indeed, either they were considered as adults-to-be and studied as such, or their characteristics were accepted but then scholars did not want to study them, because children’s activities were not considered interesting enough. In this article, I try to study pictorial representations of children’s game in 16th century Venetian family portraits to prove they had the right to play, and that this right was determined by their age and their gender.