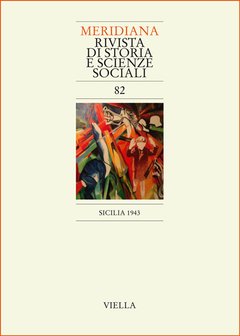 Introduction
1943 is a crucial year for the history of Italy. After the Allied landing in Sicily in summer, the Country collapsed. The consequent creation of two governments in the Southern and Northern Italy, respectively connected with Allied occupation troops and Nazi-Fascist regime, did not resolve the deep crisis; not even heal the rift between institutions and civil society opened by war. Especially in the «Southern Kingdom», controlled by Anglo-American troops, antifascist Cln forces were obliged to make their way between the monarchist Badoglio government, compromised with fascism but endorsed by Allies and their administration. Furthermore, in that Italy «freed before Liberation», the presence of Allies heavily weighs on institutional, political and social dynamics. In this context, we can discuss the causes of Italian people welcome to Allied enemy troops. However, we cannot be referred to political categories. We can rather find the answer in the prevalent filling of fear between people, later become relief for salvation; then, widespread hope of a better future. We can even refer to the listing due to the war front overturning. In addition, we have to consider that in the following decades the narrative of the lost battle fuelled the treason or conspiracy argument. Starting from Sicily, this issue of «Meridiana» deals with all these themes in their different outcomes.
Keywords: 1943, Allied occupation, Italian war front, State collapse

The war of nerves. Radio London’s broadcasts from El Alamein to the Husky Operation
The Bbc radio propaganda during the Second World war played a significant role for Italy. As a matter of the fact, British broadcastings represented a source of alternative information for a country governed by a totalitarian regime and contributed to the Italian Resistance to some extent. However, the Bbc was also the medium adopted by Great Britain to communicate to the civilians of an enemy country. This double role of the radio led to a conflict of interests in which the Bbc was a morale support for Italians and the voice of the British government. The aim of this article is to discover how the programmes of London Radio towards Italy addressed the Italians from November 1942, month of the Allied victory in El Alamein, to the Husky Operation of July 1943. After the decision of landing in Sicily, taken at the Casablanca Conference of January 1943, it was indeed crucial for the Allied to prepare the Italian public opinion to their arrival. The analysis will be accompanied by an exam of the weekly directives of the Pwe, organisation in charge of propaganda on behalf of the Foreign Office, to the Bbc Italian Service. The programmes as well as the directives will show clearly how the Mediterranean strategy was pursued by the radio.
Keywords: Radio; Propaganda; Bbc; Mediterranean theatre

Southern Italy under the Bombs, 1940-44
This article examines aspects of the consequences of Anglo-American bombing on Southern Italy during the Second World War. In particular, it aims to analyse and link together different aspects of the issue: the reasons of the Allied military and political leaders for bombing the regions of Southern Italy; the failure of the Fascist regime’s passive defences to protect both artistic cities and the population from the air raids; and the civilians’ reactions to Allied bombing and liberation. While seeking to   address crucial questions posed by the most recent historiography on the air war on civilians in the Second World War, this contribution presents the results of a research pursued in the Unites States of America and the United Kingdom, as well as in both national and local Italian archives. The article suggests that the population in the South shared much of the same experience of Northern Italians, but with more extreme consequences, due to a more accentuated lack of resources, in particular in the cases of food provision and of civil mobilisation to confront the material impact of the raids.
Keywords: Second World War; Bombing; Southern Italy; Allies

The Allied landing between history and memory
Over the last years, particularly after the Berlin Wall fall, the memory of World War II has emerged as a crucial issue in the historiographical debate. An important role has been played by the oral witnesses which, starting from traumatic events such as the Holocaust, brought attention to the violence experienced by the population during the war. This has lead to a new historiographical approach, which focuses on the subjective experience of the civilians and proposes a new analysis of both the Allied occupation of Southern Italy and the civilians’ involvement in the military occupation. By analysing some recent horal witnesses as well as some recent literature on the Allied landing in Sicily, this essay aims to find the links between the actual war events and the myths and legends around them. It will emerge the gap between the public memory of the Allied liberation of Sicily and the personal memories of the battle of Sicily. While it remains undeniable that the Sicilians were looking forward to the liberation by the Allied troops, this study will point out the civilians’ criticism towards some particular military choices made by the Anglo- Americans. The Italian military defeat remains crucial for the Italians, and recasts the issue of the attitude of Italian people toward the Allied landing and the fascist regime.
Keywords: Memory; War; Myth; Landing

Sicily 1943: images and the portrayal of a defeat. Politics, historiography and the market
This essay considers three different phases of the Italian historiography for the year 1943 in Sicily. For a long time historiography marginalized the invasion of Sicily by treating it like a secondary event in the Second World War. It was the sign of a difficulty in contextualizing the role of the Sicilian events following the Italian ones in different post war periods relating to the political debate. At first the fascist gerarchi and the chiefs of the Italian Army in Sicily argued about the defeat making reciprocal accusations of treason. It was a very important debate in 1943-45, but also during the first republican era (1950’s), when the right-wing Italian formation was divided into two rival political factions: the neo-fascist faction and the monarchist one. They elaborated a heroic paradigm in the attempt to reach an agreement, but the split was very deep. This debate confirmed the fascist and militarist heritage into the republican cultural pattern. A different phase of interest for the story of Husky appeared in a new political context. The tale favored the involvement of mafia and the rise of a Sicilian separatist movement and minimalized the military impact. The consequences of the Allied occupation on regional society and politics became more important than the national context with a difficulty in standardizing the narration in a national pattern. In a third phase the story of the involvement of mafia around public opinion’s interest took the shape of a myth, and in this way it was successful with the mass media and the cultural world; for historians it is very difficult to oppose a scientific reconstruction.
Keywords: Fascist heritage; Monarchist treason; Mafia; Sicilian separatism

Ruling the Mezzogiorno. The Allied Occupation in Southern Italy (1943-45)
In winter 1943 the United Stated and Britain planned the invasion of Axis-held Europe and decided to invade Sicily. A Military Government (Amgot) – which would be a model for the future Allied administration in   Europe – was set in order to administrate the occupied territories. While the Allied propaganda presented the invasion of Italy as a «liberation» from the Axis yoke, when in summer 1943 the Allied troops landed in Sicily, Italy was actually treated as a fully-fledged enemy country. When the Amgot became operative, the contradictory role of the Allies in the occupation emerged clearly. The aim of this article is to examine the complex aspects of this military occupation in Sicily and Southern Italy, gradually occupied by the Allies in 1943-44. Indeed, the Civil Affairs, the armed forces’ section in charge of organizing the military occupation, had to deal with complex problems such as the political and societal reconstruction. The work examines, mostly by analyzing Allied archival sources, the issue of the Amgot institutional organization. Within this framework, it is particularly investigated the civilian involvement in the occupation as well as the big gap between the rhetoric of the good war and the actual war events. While seeking to answer these crucial questions, this contribution will also discuss the way Southern Italy faced the difficult transition from Fascism to Republic during the Second World War.
Keywords: Amgot; Mezzogiorno; Second World War; Allies

Sicilia all’addritta. The 1959 elections, the autonomism and its narratives
Since 1958, the main actors of the Silvio Milazzo government were a group on politicians coming from the Christian Democracy (Dc), including the president of the region himself, fringes of the island’s conservative right, and even left-wing factions. Such groups were kept together by a fiercely autonomist political discourse in contrast with the «Fanfanian» Dc. Such an autonomism included the many tensions passing through the Sicilian society. It absorbed issues and projects coming from several actors of the local and national scene. By including the Communist Party (Pci) within the perimeter of government, it appeared as an attempt to move beyond anti- Communism. The emergence of a second autonomist catholic party, and a Dc facing the challenge of being in opposition for the first time, made the 1959 Sicilian elections exceptionally relevant. Accordingly, the communication and propagandist effort of the main parties was massive. On the one side, to favour a deep transformation of the Sicilian party system, Communists and Social Christians revitalised – although in different ways and with different   goals – the regionalist and in some cases even micro-nationalist symbols and languages. On the other side, the Dc sought to normalise the Sicilian events by emphasising the successful performance in government and by capitalising from the traditional and radical anti-Communist mobilisation.
Keywords: Autonomism; Elections; Sicily; Development

The great internal migration: new analysis and old paradigms
Internal migrations in post war Italy have played a crucial role in shaping Italian society and economy. In particular, the great internal migration during the economic boom in the 50s and 60s registered the highest mobility rates in Italian migration history. Nonetheless, historians and sociologists are still lacking to study this very complex and multifaceted phenomenon with deep and fine-grained analysis. The essay is focused on a recent monograph on this issue: Nazareno Panichella, Meridionali al Nord. Migrazioni interne e società italiana dal dopoguerra ad oggi (Southern immigrants in Northern regions. Internal migrations and Italian society since the war). The author has worked out data of a rich survey on 11.000 persons (Indagine longitudinale sulle famiglie italiane: Longitudinal Survey on Italian Families) with the Event History Analysis, and presents some empirical evidences. There are shadows and lights in the Panichella’s monograph: the essay underlines both the convincing results, which appear innovative and useful for further researches, and the weaker parts of the book, which reveal the survival of some old paradigms of the «questione meridionale» (the Southern question).
Keywords: Social history of Italy; Internal migration; Southern question; Event History Analysis

Church and ’Ndrangheta
Three recent publications are focused on the relationship between the Calabrian Church and ’Ndrangheta, highlighting a specific feature of the   main topic of the relation between Church and Mafia. At the same time, some particularly significant events – as for example the visit of Pope Francis in Calabria and the controversy on the religious processions – have pushed the Episcopal Conference of Calabria to reflect on its efforts in fighting Mafia. The publication of the pastoral note on ’Ndrangheta, although with some cautions, calls Calabrian church to face the challenge of renovation and of the anti-mafia action in many fields: the formation of clergy, the collaboration with the judiciary in respect of mutual autonomy, the relationship between crime and sin, the administration of sacraments, education for responsibility.
Keywords: Catholic church; ’Ndrangheta; Canon law