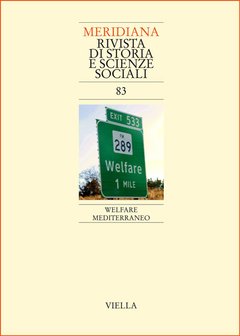 Southern Europe between Social Rights and the Economic Crisis: The Welfare States in Time of Austerity. An Introduction
In this introduction to the Special Issue on the welfare states of the Southern European countries we rst brie y review the literature about welfare regimes and, then, we inquire whether the peculiarities of the Mediterranean welfare regime have been challenged in the recent years by some structural changes and by the austerity measures that have been introduced in Italy, Greece, Spain and Portugal in order to deal with the current economic recession. Moreover, also basing on the papers included in this special issue, we summarize the main contents of the reforms introduced in these four countries and discuss the implications of some crucial changes that have recently concerned the modalities of the policy making.

The Austerity Policies: Which Impact on the Mediterranean Welfare?
The main goal of this article is to show the impact of the austerity policies adopted in the Mediterranean countries of the euro area on their welfare systems. We emphasize as a crucial aspect the asymmetry existing between the deep causes of the crisis in the euro area and the policy response encouraged by the main international institutions: while available evidence does not allow us to single out lack of scal discipline as a concurrent determinant of the 2011 sovereign debt, reforms implemented to cope with it concentrated on sharp reductions in public expenditure. Together with other sectoral interventions (in particular on labour market), this line of action is deeply changing the main characteristics of the welfare states built in the second half of 20th century in such countries. Analyzing in detail the policies carried out in Greece, Spain, Portugal and Italy since 2011, the article highlights a substantial similarity, notwithstanding the relevant differences in economic fundamentals of these countries. In addition, in most cases, policy choices show a remarkable continuity with reforms undertaken well before the crisis, which in many regards fed the real unbalances at the root of the crisis itself. For this reason, it is not surprising that the effects of these recovery policy are, for now, far from being satisfactory: not only they have brought about a further deterioration of public nances; they have also worsened the economic and social condition of a large part of the population, with signi cant increase in inequality and poverty.

Crisis, Austerity, Health Systems and Health Status in the Southern European Countries
The effects of the Great Recession on health are not yet fully evident, but it is clear that they are considerable. This paper rstly summarizes the main austerity measures on the health sector adopted in the Southern European countries (Italy, Spain, Greece and Portugal). A survey on the literature about the controversial relationship between income and health and a short focus on the aftermath of some past economic crises in different countries follow, but both do not provide de nitive answers on the health effects of economic crises. Hence these effects are examined from four standpoints: 1) epidemiological conditions and technological development; 2) capacity to increase cost-effectiveness of expenditure rather than reduce access; 3) increase in overall social risk; 4) increase in «institutional stress». In the four observed countries problems of physical and economic access have emerged. The trend toward universality was reversed in some cases, e.g. Greece (increased number of people without health coverage), and Spain (irregular migrants and unemployed young people). An actual demolition of the public health system seems to be in progress only in Greece, but austerity has not nished. Some evidence on mental health, suicides, malnutrition, increase in heart attacks, Hiv, malaria is alarming. Austerity hinders the adoption of social policies useful to preserve health, and a sort of institutional stress, also related to overall problems of democratic representation, is growing.

Still in the South? Labour Market Reforms in the Mediterranean Countries During the Economic Crisis
The article analyses the main trajectories of labour market policy change in four Mediterranean countries (Greece, Italy, Portugal and Spain). It illustrates and discusses the main reforms adopted slightly before and during the recent economic crisis in the domains of employment relationships regulation and unemployment bene ts. The article addresses the following question: to what extent have such reforms affected the possibility to (still) detect a common Southern European (SE) labour policy model, as it was described by the sociological and political literature in the Nineties? Two dimensions are put at the centre of the analysis: the «internal coherence» of the labour policy model – i.e. how close are the institutional features of countries belonging to the same group – and the «external distinctiveness», i.e. the empirical distance between models. The article posits that the internal coherence of the SE labour policy model has been increased. In contrast, the possibility to distinguish the SE model from the Continental one has been sharply reduced, above all with reference to the liberalisation of employment contracts.

Pension Reforms in Italy and in the Southern Europe: Changes and Persistent Strains
The article sheds light on the last two decades of pension reforms in Italy and the other Southern-European countries: Greece, Portugal, and Spain. The analysis rests on three dimensions: the transformation from single to multi-pillar systems; rule harmonisation among social and occupational groups; and cost-containment. As far as the reforms’ path, all the countries under scrutiny underwent reforms in order to: increase the role of supplementary pensions; reduce inequalities among pension schemes; contain present and – especially – future public spending. Looking beyond this common trend, implementation substantially varies across countries in all the three dimensions. As far as the reform’s outcome, notwithstanding the measures mentioned above, the interaction between policies and their socio-economic context saw enduring tensions, such as persisting inequalities, risk individualisation, and systemic vulnerability to external shocks.

The Domestication of Welfare from Below. Perspectives and Contradictions among Roman Squatters
Rome has always had an enormous «housing issue» related to its inconsistent urban development, driven mostly by individual family needs (self-construction) and the private interest of developers. This condition has spurred since the 1960s a widespread movement of squatters, often organized along political lines. This paper tries to assess the feasibility of squatting as an alternative to state, market or family driven forms of housing welfare presenting Rome as a case study. A comparison between the original squatters from the 1960s and those currently organizing occupations is rstly presented to highlight structural differences. Using short ethnographic portraits, the second part of the paper sketches the ideology of the movement as an intentional attempt to produce new forms of sociality and urban life, while the third paragraph reports the overall negative image of any kind of squatting by media and governmental politics. In the conclusive paragraph a basic contradiction of Roman squatting is given central attention. While the political leadership wants to transcend the bourgeois forms of urban and family life, in order to achieve that aim they have to resort as their rank and le to families that often highjack that goal to be included instead into an ordinary process of «family welfarization» of their emerging bourgeois housing needs.

Mande Metalworkers’ International: The case of «Burkinavorian» Chain Migration
This article intends to summarise a eld of research concerning the chain migration between the Ivory Coast and Italy. The dissertation begins with retracing the history of burkinavorian migration (Burkinabé and Ivorians), with a focus on its uniformities and historical determinants. Particularly, we underline the priority of linguistic and ethno-religious identity as a factor of structuration. After examining the migration history up to the «rise to the North of Italy», towards northern industrial districts, we investigate the dynamics of job placement in local labor markets. The ethnography is carried out within an industrial district crowded with spatial concentrations of Burkinavorians. The district’s distinctive features are analytically presented, starting from the social structure the immigrants integrate into. The article aims to demonstrate the overlap of cultural differences on social and economic differentials. In conclusion, we will argue that the mobilization of burkinavorians workers takes place by means of legal constraints on one hand, and the imperative of «tradition» on the other. After individuating the several actors involved in the process, we will claim that burkinavorian immigration is the outcome of a post-colonial strategy which has intentionally built the conditions for the settlement of immigrants, who could prove themselves highly useful for the Italian local economies.

Eni: «Special Agent» of Decolonization.
The Italian oil corporation «Ente Nazionale Idrocarburi» (Eni) took its rst steps on the international oil market of the fties, at a time when this was ruled by the oil cartel known as the «Seven Sisters». Leaded by Enrico Mattei, Eni accomplished the search for oil in distant lands, as the major companies were accustomed to do, but without the support of a former imperial state, like France and Great Britain, or a superpower like the United States. Mattei tried to play overseas using a kind of anti- imperialist manner, providing technological know-how to formerly colonized countries, also giving them political-cultural support when these countries were attempting to combine new national identities with the economic development. As for the domestic political life, Eni found support to its foreign strategy just for a brief moment in the late fties within the Christian Democratic party (Democrazia cristiana), in that political sector known as «neoatlantismo», which was headed by Amintore Fanfani. In this essay I try to trace the lines of this political convergence between Eni and the Italian government aimed at building a «Mediterranean» political role for Italy. A role that still today should represent one of the most urgent issues in the Italian political agenda. Keywords: Ente Nazionale Idrocarburi; Oil cartel; Italian Mediterranean policy; Neoatlantism

A New Opportunity for Comparative Urban Studies in Italy
The paper starts from an apparent paradox: the book of Casavola and Trigilia (La nuova occasione. Città e valorizzazione delle risorse locali, Donzelli 2012) presents important results, relevant methodological innovations, and offers many clues for urban political economy. But it has been almost ignored by urban studies in Italy and abroad. It is not a single case for urban studies. The paper discusses the main contributions of the book, and its euristics. It focuses on the distinction between endowments (resources, forms of capital) and activation processes for the explanation of urban economic development. It discusses the contemporary crisis of comparative political economy in urban studies, and some structural factors of fragmentation of the eld. Later on, it explores the diffusion of depoliticized approaches to the study of power in contemporary urban studies. Looking for a more pragmatist approach to urban issues, it points to what urban studies (and urban sociology in particular) could learn from cities and their governance modes, not to waste their resources but to activate them at best. The main idea is that this book and the story of its reception have something to tell not only concerning euristics for urban research, but about politics of urban research too.