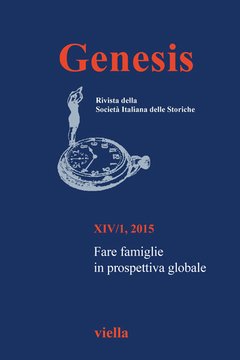 Introduction
The editors introduce the main questions explored in this issue on Making families. Adoptions, bonds and imaginaries in a global perspective. They argue that family is at the core of all contributions, while taking a critical view of recent international historiography. A vibrant field of research in the Eighties and Nineties, the European family appears to have lost much of its analytical appeal and is therefore a field in need of renewal. The four essays in this special issue situate themselves within a new agenda where coresidence, blood lines and patrilinear ties are marginalized in favor of a non- biological notion of family structure and relationships. They highlight a long diachrony, from the early modern period in Italy and colonial Peru, to Egypt, Cameroon, Austria and Germany in the second half of the XIX century during German colonialism. The analysis focuses on case studies centered on the transfer of children among families, between families and single men and women or institutions, within a growing space scale. They shed light on a wide variety of practices of filiation and fosterage connected to specific European and non European contexts. This approach allows for narratives of interconnectedness and agency and of deep emotional involvement and imaginaries relating to parenthood, the survival of lineages and names, expectations and desire. Unequal relationships of power and authority are also taken into account. Owing to a lack of historical evidence, the issue does not fully acknowledge the dark side of adoptions taking place in many areas of the world today where gender is a crucial aspect. Recent anthropological research indeed illustrates the ways in which unmarried mothers in South Asia, pressured into abandoning their newborns, resist and choose to keep their children with them transgressing local codes of family honour and social shaming.

Adoptive and foster families in early modern Italy
In the wake of the latest historiographical trends, the contribution examines the variety of adoptive and foster practices in use in the Italian peninsula in the early modern period. Privileged sources of the research are the documents kept in the archives of charitable institutions. Privileged places of shelter for children without families, they promoted a wide circulation of children and young people entrusting them temporarily or indefinitely at families interested in taking charge of a child to obtain material help, some company, or to meet the desire for parenthood. Although it is not easy to untangle the reasons that led men and women to accept a child of others, the urgency to find families willing to receive abandoned children generated a number of forms of foster care that configure diverse family models. Married couples or relatives, single men or women, or churchmen could in fact take children in foster care or adopt them.

Old Habits, New World: Spanish Fathers of Mestizos in 16th-Century Peru
The relationship between patriarchal power and paternalism in discourses of empire is well studied; less understood is the changing roles of fathers with the expansion of empire. In my research on 16th-century family in transatlantic context, one area of interest is the adaptations men made to their roles as fathers when mobility, distance, separation, labor, or law created shifts for families in the decades after Spanish arrival to Peru in 1532. Based on notarial documents (wills, powers of attorney, legal donations, dowries) as well as judicial cases, this article delves into the everyday practices of being a father in the midst of Spains’ consolidation of colonial rule in Peru (1530s to 1580s). In particular, this article will analyze Spanish fathers who had children with indigenous women outside of the institution of marriage (and might also have children with Spanish wives before or after fathering these children). The constructions of fatherhood and masculinity in the sixteenth-century colonial world come to the fore, with attention to both indigenous and European cultures.

Children of the Church. “Riscatti” and the globalization of Catholic welfare (1840-1914)
This article analyzes the complex interactions that had emerged in the second half of the nineteenth century between European individuals and families, gendered constructions of parenthood, perceptions of “needy African children” and – globalizing – Catholic welfare and philanthropy. Introducing the example of the Pia opera pel riscatto delle fanciulle More, a semi-organized transnational Catholic network of individuals and institutions that promoted the “riscatti” of child slaves from Egypt, the Sudan and Ethiopia, the article discusses the forced removal and displacement of African children in the name of aid and care. Analyzing the relationships established, the article suggests discussing the systematic ransoming of child slaves in relation with European and Christian notions of family and gendered family roles in general and cultural representations of parenthood, authority, aid/care and reproduction in particular.

West African Families sending Children to German Homes: Duala and Oesterle (1891-1896)
The example of two boys from elite families of Duala, Cameroon living with a petty bourgeois German family discusses child circulation practices of the Atlantic contact zone in relation to notions of “family” and homemaking. On the level of colonial control the ambivalent practices of state control through the male custodian and the agency of the African father by means of financial and social interaction are highlighted. On the affective level an array of relations between extended families points to bonds not governed by the logic of “race” and coloniality. Although in the end the German colonial authorities forcefully restricted the ambitions of Tube Meetom and Rudolf Duala Manga Bell, by exiling one and executing the other, their life stories already advanced African independence movements of the 1930s.