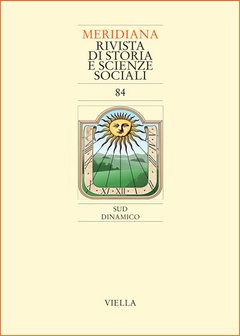 Industry and South of Italy: Historical Roots and Perspectives of the Aviation Sector in Campania

The paper shows how the construction of the aviation market was supported by national governments in its early stages of birth and consolidation, given its strategic importance for the security, defense and the economy. This process occurred in conjunction with the boost given by universities in the transfer of knowledge and highly quali ed skills, the latter needed for reproduction and innovation of companies in the sector. Social networks and market were welded in a special way around this institutional core, developing over time a capacity to overcome through various strategies – among these, even the use of informal channels for access to tangible and intangible resources – those constraints that have attempted to undermine the balance and /or the growth of the territorial system.

The Red Gold. Potentials and Limits of the Tomato District of the Agro Nocerino Sarnese

In the context of the global crisis, which is particularly heavy for the Italian manufacturing industry, some territorial economies show a remarkable resilience and in some cases signi cant signs of recovery. Among these, especially in the Southern Italy, there are some agro- industry districts, one of the sectors that can realistically be an important lever for development. In these lines, I describe characteristics and recent evolution of the canning tomato industry in the Agro nocerino sarnese (an area between Naples and Salerno), paying particular attention to the contextual factors which favour or hinder the creation of cooperative networks among entrepreneurs. As is known, cooperative relationships among companies – in other words, social capital resources – are a key factor in improving the economic growth.

Diverging Dynamics. Logistic District and Agri-Food in the Plain of Nola

The Local Labour System (Sll) of Nola includes 31 municipalities distributed between the provinces of Naples and Avellino (Campania Region). Climatic conditions, geographical location and infrastructures are the major strengths of the area. System without specialization, it does not include productive Districts. Logistic District CIS-Interporto- Vulcano Buono and the agri-food sector characterize the economic vitality of the System. The Logistic District borns from the initiative of a textile entrepreneur from Naples and today represents an important node in the global trading network. Its evolution follows two logics: increase services and develop functions. The agri-food industry represents the natural evolution of the agricultural and commercial vocation of the area. Technology innovation, quality of raw materials and attention to the consumer are the strengths of this sector. The Logistical District and the agri-food industries have a very limited interrelation that sets limits to the development of both. At the institutional level, the actors play an ambiguous role, including good behaviour, structural limitations of policies and widespread stereotypes.

This article analyses the evolution of the Murgia’s upholstered furniture district and re ects on its development prospects. Since the mid-2000, the district has gone through a severe process of downsizing, due to the competition from low labour-cost countries, the dependence from a limited number of nal markets and the incapacity of local companies to take advantage of globalization. The inevitable restructuring process has led companies to adopt an array of combined strategies aiming to achieve their product and functional upgrading: by improving products’ quality, the scope is also to gain a strategic position in the value chain by controlling the upstream and the downstream phases of the production cycle. Some district’s companies have also delocalized their production. Besides the economic restructuring, the case study reveals also the importance of restoring the social bases of the local organization of production. Despite its dynamism, the local social capital has been greatly weakened during the past decade. The agreement signed in 2013 between the national and the local governments, acknowledging the district’s growth potential, represents an important institutional backing to the self-organized and informal resources of the Murgia’s society and to their possible reorientation towards new economic opportunities.

The Footwear District of Barletta: originis, evolution and perspectives

This paper aims to suggest new insights on the footwear district of Barletta, in the Southern Italy. Through a series of in-depth interviews with diversi ed and quali ed stakeholders, as well in light of the analysis of such structural data as exports, the size and the absorptive capacity of rms, a representation of its relational dynamics are discussed, both in a horizontal versus vertical and a local versus non-local perspective. Moreover, the strategic re-positioning of the district is discussed, assessing the main factors which contribute to its innovativeness. The paper is structured as follows. In section 1 the footwear district in the Barletta region is introduced, including a description of its history and structure. In section 2, the relevance of the district in a national perspective is underlined, in particular taking into account its performance in the years from 1991 to 2010. The actual con guration of the district and its impact in terms of competitiveness is presented in sections 3 and 4, where a representation of its growth perspective is even provided. Empirical results, the opportunities and challenges the district is nowadays undergoing are nally discussed in section 5.

The paper analysis the recent dynamics of the Italian local automotive production system of Val di Sangro, situated in the Abruzzo region, specialised in the manufacturing of vans, scooters, motorcycles and automotive components. The analysis is based on a case study carried out by using different techniques, including interviews with employers and/or managers, trade unions’ and employers’ representatives, policy- makers, quali ed actors. The origins of this local system are linked to the establishment of large transnational companies during the 70s and the 80s (above all Fiat-Peugeot-Citroën and Honda). These encouraged the emergence of numerous small and medium local enterprises, operating as subcontractors. After a period of rapid growth due to different factors, with the 2008 economic crisis the automotive sector in the valley has known a slowdown and now has to face important problems of repositioning. The paper examines the main points of weakness of the local system and the experiences of local actors in responding to the recent dif culties. It identi es various initiatives aimed to increase the possibilities/abilities of innovative productions, in particular of small and medium enterprises. Moreover, the paper shows the dynamism of several companies strategically oriented towards quality production, innovations, export, human resources development and valorisation.

Pastoralism and Dairy Chain between Continuity and Innovation: A case Study Analysis in Sardinia

This article analyses a local system (the region of Oristano in the Centre-West of Sardinia, Italy) and its most important agri-food chain: the dairy sector. The article contributes to the current debate on the local development in the Southern Italy. We use a structural approach to analyse the social facts as processes linked to the space-time dimension and to the variables of the context (historical, social and institutional ones). First, using quantitative data, we describe the main characteristics of the dairy chain (sheeps and cows); secondly we reconstruct the historical change in the sheep breeding, how shepherds buy the lands and settle along the old transhumance road in this region, keeping a model of extensive sheep farming by the way; third we focus our arguments on the origin and development of cows intensive breeding in stables, from the land reclamation project to the agrarian reform. Then we analyse the organisation and the change in the dairy sector from the end of the second war until now. Finally we give some suggestions for policies to produce local collective goods.

The Wine Industry in the Northwest of Sicily between Tradition, Dynamism and Innovation

The wine industry in Sicily over the years has been involved in a process of change, which allowed the strategic reorientation of the sector and the de nition of a speci c competitive role within the system nationally and internationally. The wine area of the Northwest is one where wine production is concentrated in the region, and has been one of the main protagonists of the process of innovation in the industry. In fact, despite its many structural constraints, including the lack of services, it has been able to bring about changes that affect not only the aspect of quality production, but also the organizational and management. This was made possible primarily by the long history of accumulation of know-how in addition to natural conditions and intentional factors, they have always counted some local capacity to perceive market opportunities internationally and also to invest in experimentation and knowledge. This study want in the rst instance, highlight what were the factors have encouraged the development and, second, to identify the challenges that the sector has not yet addressed, making his success story a path partially accomplished.

Popular Legitimism and the Land Question. Repertoires of Contention in Capitanata, 1860-61

The present paper offers an insight into the behaviour of people who took part in booth reactionary and land protests which took place in Northern Apulia since August 1860. Such a comparative analysis allows us to observe the difference between the objectives and the dynamics of those two forms of collective action. While the people who was demanding the access to agricultural resources did not show any kind of legitimistic politicization, the reactionary riots were characterised by standard repertoires of contention caused by the diffusion of a legitimistic political culture among the populace. Many peasants considered king Francis II as the legitimate head of a traditional political and economic order based on justice and religion, subverted rst by the liberal transformation of the Kingdom of Two-Sicilies in June 1860, then by its annexation to the Kingdom of Italy. The performances of reactionary riots can be interpreted not as a form of class struggle against landlords, but as rites of passage aimed at restoring that order. The existence of this legitimistic ideology among the lower classes leads to reconsider the problem of the spontaneity of the popular reactionary commitment, which, despite the organizational involvement of the élite in the revolts, can hardly be denied.

This essay deals with the topic of the post-Unitarian brigandage conducted through the analysis of the literary representation produced in France and in Italy in a tense political climate due to public order problems in the new Kingdom. I have assumed that the mutual in uence of the literary imaginarium, the political strategies and the socio-criminological classi cation deconstructed the romantic-chivalric tradition of the Italian bandit. Consequently, the brigandage was rede ned as a «counter- society» constituted by violent professional criminals with autonomous habits, customs and language. The organizational structure and identity of brigands appear related to the bas-fonds literature, and broadly to the French social novel. The political controversy reshaped the criminal and social identity, adjusting it case by case and identifying in the Italian «dangerous classes» the real obstacle to the hard paci cation of Southern regions. The result was a rich debate capable to nd its roots in the literary eld and to act directly in the public domain with performative effects.