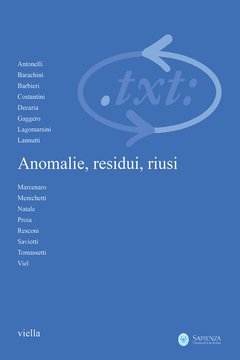 The article analyzes the co-existence of several linguistic forms from Poitevin and Gascogne in Marcabru. Particularly, it suggests that the readings of the a manuscript are better and difficiliores, and that they derive from an ancient and Poitevin source which the author names as ν.

The article offers a new edition of Tot franchamen, donna, venc denan vos (BdT 326.1), a poems which has seven different attributions. The essay argues that the text was anonymous in the sources and that the seven attributions transmitted by the manuscripts are the result of a conjectural work of the copyists. The critical text also offers an analysis of the manuscript tradition, of the metrics and date of the poems and provides a new commentary.

The paper aims at retracing the complex network of manuscript attributions (certain, presumed or wrong), that connect Bernart de Ventadorn with others troubadours, in medieval manuscript transmis- sion. It herefore reasesses Appel’s classic edition (1915) against the most modern critical work and, in some cases, a direct examination of the manuscripts. The essay also discusses a number of irregularities concerning macro-textual order and structure of the stanzas in poems 70.1, 70.3, 70.13, 70.38.

The article discusses the cases of textual duplication, double traditions and doubtful attributions in the medieval Galician-Portuguese lyric tradition, in particular for the individual texts in manuscripts A, B and V. The aim is to identify the processes through which they were produced and to establish a comparison with the Occitan troubadour tradition.

The poems by Colin Muset are anomalous, due to the character- istics of their manuscript tradition and the numerous metric irregularities. The article proposes a new analysis of some of the irregular poems attested in more manuscripts, starting with the interpretations offered by scholars over time, from the doctoral dissertation of Bedier (1893) until today.

The paper develops issues relating to the database TraLiRO. Unfortunately the question of the formal restoration – fundamental for the Italian medieval texts is rather sacri ced in the concise philological treatment of the database. The essay discusses the consequences of this decision (such as the confusion between substantial and formal variants, in Branca’s edition of the Cantico di Frate Sole).

In this work I examine the textual tradition of the cantiga Adeus, Amor, adeus, el Rey by the Archdeacon of Toro, transmitted by the Cancionero de Baena (PN1) and the Cancionero de San Román (MH1). Originally written in Galician, this cantiga is the only poem transmitted by more than one manuscript within the Archdeacon’s poetic production, which otherwise has been preserved only by the Cancionero de Baena. The evaluation of the variants of the two manuscripts, copies of anthologies compiled several decades apart from each other, provides interesting data which make up a stratigraphy of the linguistic hybridisation occasioned by the Castilian scribes responsible for the copy in the different branches of the tradition represented by PN1 and MH1. On the basis of these considerations, I will address the issue, widely debated, of the linguistic hybridity which characterized the poetry that ourished in Castile in the second half of the XIVth century.

The essay examines some of the less traditional channels through which vernacular poetry has been transmitted, with particular attention to archival legatures, chronicles, correspondences, public registers.

The chansonniers are the most distinctive and nearly exclusive way of transmission for trouvères poetry, as well as of the other romance lyric traditions of the Middle Ages; however, it is possible to recognize a fair group of texts that are transmitted also or only outside the French chansonniers. This paper studies them seeking to explain the reasons of their peculiarity, and to specify their literary and cultural value.

Old French lyric poetry does not match the monolithic image often presented by critics. It begins and ends with two exceptional cases, Conon de Béthune and Thibaut de Champagne and moreover the exclusive insistence on the grand chant courtois with its love theme largely re ects the choice of the songbook compilers. Selective criteria control the organisation of the aesthetic canon shown for example by mss. K N P X. However, analysis of Thibaut de Champagne’s manuscript tradition demonstrates that his Liederbuch, with which these same songbooks begin, presents characteristics that are different from and incompatible with the criteria governing the early canon of trouvère lyric. Placing the King of Navarre at the head of the trouvère tradition may therefore be a late move revealing a change of taste and a new literary concept of lyric production.

The manuscript transmission of Adam de la Halle’s chansons is thoroughly peculiar compared to that of the other trouvèresʼ poems: in fact, they have found a marginal though outstanding place in Old French lyric anthologies. Moving from a detailed codicological analysis, this paper aims at investigating how Adam’s poems have been originally transcribed and transmitted. Their later fortune through the gathering and the dismembering of the books which contain them (mainly chansonniers P and W) will also be examined, focusing in particular on the pivotal role presumably played by the bibliophile Châtre de Cangé in the 18th century.

A century after Barbi’s Studi sul Canzoniere di Dante, scholars have made good progress in de ning the connections between the Italian canzonieri. If the most important outlines of the manuscript tradition of XIIIth century poetry have been satisfactorily recognized, much work remains to be done about the following generations. Only in recent years, after the monumental edition of Dante’s rhymes by D. De Robertis, scholars began to put some order in the tradition of fourteenth-century poets (something that Barbi compared to a swamp), producing editions of the texts according to scienti c criteria and seeking new interpretative keys for the history of that literary experience. Through a series of examples derived from the project TraLiRO, the paper examines some general trends of the Italian lyric tradition, showing the effects of the absence of signi cant gaps in the production and reception of texts from the XIIIth to the XVIth century. Focusing in particular on poets operating in the mid-fourteenth century Tuscany, the A. highlights the potential of a historiographical approach based on the systematic analysis of the manuscript tradition.

Within Occitan Literature, the technique of the lyric insertion achieved wide success from a very early stage, in a variety of forms. The article focuses on the troubadour quotations of Raimon Vidal’s novas Abril issia e mays intrava and So fo el temps c’om era gays, and of the Breviari d’amor by Matfre Ermengaud. The novas are situated at the opening of the narrative tradition in Occitan, while the Breviari d’amor places itself at the closing of the troubadour experience. The essay investigates the role played by the troubadour quotations within the complex structure of the three texts, aiming to understand which purpose the quotations serve, and which picture of the Occitan lyrical experience they portray.

The studies on the corpus of verses in French prose narratives of the XIIIth century (Tristan en prose and Guiron le Courtois cycle) have led to antipodal interpretations, that have not been given a persuasive synthesis yet: the lyrical texts (mostly lais) should be interpreted as imports, taken from the “repertoire” and recycled into the prose (J. Maillard, P. Bec); or else they could be original creations of the prose writers (Ph. Ménard). The essay aims at an overall re-examination of this issue, evaluating narratological and philological evidence and analysing both manuscript traditions of the prose narratives and external records. Such an analysis led to reconsider the “allogenic” hypothesis, suggesting, at the same time, to question some aspects of an “endogenous” interpretation extended to all the texts of the corpus.

The insertion of lyrical poems into historical narratives written in prose is less studied than its counterpart in prose. This preliminary article draws on an extensive examination of prose historiography written between the thirteenth and the fteenth centuries; the examples discussed raise the question of the relationship between the texts quoted in prose historiography and the tradition transmitted by the chansonniers or other manuscript anthologies. In the rst section, the analysis of the metrical structure and of the rhymes provides a literary context for the poems by Philip of Novara and for the chanson Ne chant pas, que que nus die quoted in the Rothelin Continuation of the Eracles. In the second section, the manuscript tradition of the ballad Chief essoigné de piteuse aventure (1415) is studied as an example of the transmission of a lyrical text through different media: prose historiography, manuscript anthologies and registers of the notaries.

The present essay explores a speci c phenomenology of the indirect tradition which can be traced in late Medieval Castilian poetry: the corpus under scrutiny comprises a number of texts belonging to the genre of the glosa and decir with poetic quotation. Both genres partake of a citation practice and an interpretive mode which mark them as instances of intertextuality and metatextuality. The analysis of the variations found in a discreet number of texts transmitted both directly and indirectly revealed two major trends in the Castilian school: on the one hand, a conservative approach which relies on the sporadic reproduction of interspersed fragments; on the other, an approach which alters, with various degrees of relevance, the intertextual passages. Additionally, identifying the formal rationale underlying these textual variations has provided the grounds to re ect on some of the methodological principles to be followed in the edition of texts transmitted indirectly.