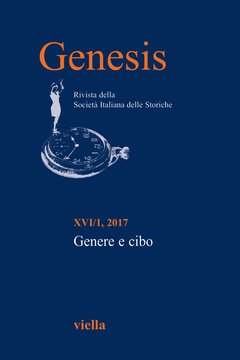 Introduction. Gender and Food: Everyday Practices and Women’s Writing
With the aim to add to the extensive research that has emerged around food in the last decades by adopting a speci c gender perspective, this special issue of «Genesis» focuses on cooking as well as on the huge amount of writings and discourses devoted to everyday food preparation and consumption by women, from early modern to contemporary times. With a range of different sources, from early modern account books to 20th- and 21st-centuries cookbooks of women gastronomes, the articles of this issue explore in particular the controversial role of cooking and food writing as a tool of women’s agency, both in family life and the public arena.

The Preparation of Food. A Gender Perspective (Western Europe, 16th-19th Centuries)
This paper analyses the preparation of food in Western Europe (16th-19th centuries), focusing on its gendered dimension. Three main variables are considered: social strati cation, geography and time. It suggests that in Italy, Spain and France in early modern times the cooks employed at the courts and by the aristocracy were generally men; a feminization of the preparation of food started in France from the 18th century onwards. In Central and Northern Europe women were much more involved in the preparation of food in the upper classes, too, even though the fashion for French cuisine in the 17th and 18th centuries implied a growing recourse to male cooks. The paper suggests explanations of these differences and trends over time and discusses the role of nurturing and cooking for the de nition of the female identity in different contexts.

Food and the Household. Domestic Administration and Consumption in the Everyday Writings of Silvia Rabatta Colloredo
Through an examination of the case of Silvia Rabatta Colloredo, this article sets out to study the practices relating to the acquisition and consumption of food in an important noble household of 18th-century Friuli and to assess the degree of female responsibility for control over the production, acquisition, transformation, and use of food. The wealth of documentation relating to this noblewoman enables us to widen our view of the link between women and food: diverse books concerning foodstuffs, account books, notes of purchases, as well as letters on the subject of food addressed to family members, agents, and shopkeepers can all serve to illustrate various aspects of the material life of the nobility. The analysis of this documentation lends historical and social depth to the customs of the household relating to food, throws light on the practices of economic administration of a family belonging to the landed nobility, con rms the symbolic value of food as a vehicle for identity and regulator of hierarchies and social relations, and draws attention to the importance of women’s everyday writing and the research possibilities that it opens up.

Women Cookbooks Writers in Italy. At the Origin of a History
The essay investigates the link between women and food writing in Italy in the rst fty years of the 20th century, the relationship with their audience, the cultural/ institutional role achieved by adapting to spaces granted or gaining unexpected areas of creativity and expression. In these spaces the everyday practice comes to the fore, for the rst time expressed in a feminine literature. Giulia Lazzari Turco, Angelica Devito Tommasi, Ada Boni and Petronilla are the protagonists of this “gender professionalization” with cultural, expressive, creative and identity signi cance.

Feeding a Transnational Family. Culinary Practices among the Polish Mothers Abroad
The social and historical role of food and culinary practices has been one of the most under-researched areas within the broad discipline of migration studies. At the same time, the process of feeding the family is constitutive for identities, belonging, social anchoring, and home-making that migrants engage in abroad. Connecting the results of two studies revolving around transnational families, we propose to treat both the daily/routinized and the celebratory/special culinary practices as predicates of integration with the host society. In addition, we see them as the efforts aimed at maintaining a particular degree of uniqueness within By expanding a theoretical framework of dietary acculturation, we highlight the gender dimension of this realm. Relying on the qualitative interview material, the article argues that maintaining transnational and intrafamily bonds through food varies among women and families, yet encompasses a key lens for looking at how the migrant families are faring abroad.