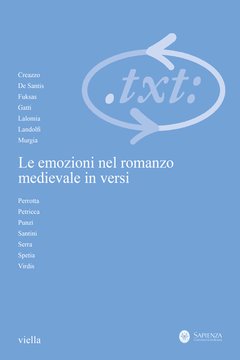 The study of the lexicon of the Roman de Thèbes shows how the text is polarized on the emotional expression of pain and of its somatic correlative – tears; a comparison between the various redac- tions proves that textual ampli cation not always implies emotional ampli cation. The analysis focuses on some signi cant planctus, and shows a comparison with other literary texts (for example, the Chanson de Roland). Finally, a new reading of the prologue is sug- gested, with references to Greek tragedy.

The paper presents a semantic study of the noun ire in the Roman de Troie by Benoît de Sainte-Maure. Ire, in fact, has been chosen as the central observation point of the emotional paradigm of the text, with particular reference to the two emotions of “anger” and “grief”. The analysis of ire is based upon the complete inventory of its occurrences, including information concerning the situational contexts, the characters affected by these emotions, the physiological manifestations of the studied emotions and their ensuing reactions, and also the paradigmatic and syntagmatic relations of the lexeme. The exegesis of single contexts also takes into account the lexical comparison with the Latin sources of the text and with the successive “translation” by Guido delle Colonne. This latter work, in some cases, offers a true Latin gloss of the noun ire, providing the modern interpreter with a useful crosscheck of its semantic connotation.

An analysis of the emotions in the Roman d’Alexandre by Alexandre de Paris helps the reader understand numerous features of the text. At rst, we will underline how the king’s laugh is a pre- cious clue to trace Alexander’s pro le and have a sense of the relationship between the romance and the literary tradition. Secondly, we will provide an overview of the emotions in the text, showing how emotions are produced in speci c contexts and how they are experienced by different characters. The emotions of Alexander are at the very core of this essay and contribute to shaping his literary representation, but also his role as a king.

The essay concentrates on the prevailing emotions in the Tristan by Thomas, starting from wrath, described as primarily female. It then moves to analyse how the author – who presents himself as emotion-free – exercises a strong control over the story through the very selection of the emotions he chooses to describe.

This paper presents comprehensive textual data concerning four romances by Chretien de Troyes which emerge from a theoretical approach assuming the co-occurrence of words as an indicator of semantic proximity and/or interdependency. Lexical data concerning the description of emotions are associated to the speci c characters affected by them, thus allowing a comparison between the characters. Differences and similarities, speci c characterizations and overlapping areas are highlighted and explained in detail. Special consideration is given to the differential factors that determine individual identity, with reference to such factors as gender, age, social position. A close examination of the collected data shows that the emotional system of all leading and also some of the supporting characters shows a consistent interconnection. An integrated affective system must be the prerogative of consistent characters and re ects an idea of realism which is based on the adoption of different angles for the description of emotions, aiming at identifying the emotional truth of a story.

The lexical analysis of the expression of pain in Partenopeus de Blois and its most obvious manifestations allows to recognize fundamental elements for the interpretation of the novel, and to better de ne the ideological context in which it was composed. In particular the use of tears (often stressed), especially by the protagonist, de nes the anonymous author more as a “contrizionista” than as a “confessionista”. Both types are discussed in XIIth c. theology. Even in this case, as in other constitutive elements of the novel (mostly the use of the marvellous and the claim to the legitimacy of women’s erotic desire), the anonymous author reveals his originality, as well as his critical position in relation to the rigid positions of the Church.

The article analyzes the description of emotions in the Escoufle, a French verse romance from the early XIII century, attributed to Jean Renart. Through the repetition of some key words tied to the representation of the characters’ psychological reactions, the author tries to condition the aesthetic and emotional reception of the text. The bipartite structure of the romance (divided into two sections, one being of an epic and political nature and the other of an idyllic and courtly nature) and the different paths taken by the heroes is used to characterise the emotional sphere, also supported by the narrative function of mise en abyme given by the author to his characters: through it the characters, as narrators or listeners, become accomplices of the poetic plan of the author, who repeatedly participates to endorse or reveal in advance their emotions.

Based on the experiences and on the attempts of his French colleagues, the anonymous author of Jaufre tries to settle the long- standing issue concerning the balance between chivalry and love, choosing to keep them separate and conferring a high priority to the rst. The double structure of Jaufre provides the basis for a detailed lexical analysis which takes into account the two main themes of romance: honour and love. The formulaic nature of the text is re ected in the reiterations of emotional responses which, in some cases, appear con icting, while in others reveal special meanings. Although brought on by speci c events, the feelings described in the romance seem to get away from courtly tradition stereotypes, revealing emotions and somatic responses which are beyond reason and control, both individually and socially.

The article examines the vocabulary related to the semantic eld of emotions in Raoul de Houdenc’s XIIIth text Meraugis de Portlesguez. This romance dramatizes the theoretical debate on the primacy of female inner-emotions rather than their mere manifesta- tion. In the excerpts analysed in the paper, through the gap between the emotions and reactions attributed to characters ‒ often complete- ly unexpected and inadequate, if compared to the classic situations of Arthurian romance ‒ and the expectations of readers/listeners, Raoul de Houdenc reworks in parodic perspective the topic of emo- tions in courtly romance. In doing so, he offers his readers the tools for re ection on some key themes of the courtly romance, as the love-prowess relationship, or the one between men and women.

This study focuses on the lexicon of the emotions in the Vangeance Raguidel with the aim of describing the affective states of the protagonist, Gauvain. Dolor, desver, paor, ebahir, ire are the words which lay at the very core of Gauvain’s affective spectrum, those which Raoul de Houdenc employs more often to describe his feelings. Data emerging from the survey suggest that Gauvain’s affective responses to the environmental circumstances in which he is immersed are very often described in terms of “amazement” and “surprise”. Interestingly “surprise“ and “amazement” are also very frequent in the descriptions of Gauvain’s affective responses in the fabliau-like narrative named Le chevalier à l’épée.

This article aims to take stock of the system shaping the repre- sentation of the emotional sphere in L’Atre Perilleux (French Arthurian novel, post-Chretien, XIII century). This novel is in part parodic, in part it – starting from a critique of previous courtly tradition – aims at reconstructing a complex network of social and moral va- lues. As a consequence it is interesting to note that the investigation on how the representation of emotions, organized, at primary level, according to the most traditional and usable rules, is later subtly bent to a critique of such an emotional sphere. The intent seems to be establishing a more solid rationality that may rule over emotions: these are not abolished or suppressed, but turn into a feeling of the inner being on which the self may be built.

In Flamenca, the story focuses on the description of the emo- tional relations formed at court between a jealous husband, his young wife, and an equally young knight. This contribution, through lexi- cal, thematic and rhetorical analysis, explores the ways in which cer- tain core feelings in the the Romance lyric and narrative tradition, such as desire, jealousy, suffering and joy are represented.

This article is a step-by step investigation on the emotional modulation of characters in Floriant et Florete and aims to show how their emotional systems actually work, establishing consistent basis for future developments, such as the comparison with other Arthurian romances, starting with those written by Chrétien de Troyes.