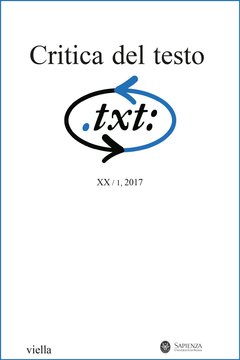 This article provides the codicological description and the edition of an unknown fragmentary witness of the Old French Vie des Peres (named Cr), which has been recently found in the Archivio Storico Comunale of Crema (CR). The contribution also contains a short linguistic analysis of Cr and identifies the Visconti-Sforza family as the possible previous owners of the original manuscript. In conclusion, the work tries to contextualize the fragment within the manuscript tradition: the study of the text of Cr reveals its higher quality, as shown by a remarkable number of lectiones difficiliores, in comparison with the manuscripts belonging to the same family in the stemma.

The collection called Li Miracoli de Senta Maria, written in Venetian by an anonymous cleric at the beginning of the XIV century, was studied by Ezio Levi in the 1917. To establish the source of some of the miracles, Levi suggested an unknown source, in common with the famous Scala coeli of Jean Gobi le Jeune. The discovery of a little Latin collection in the catalan area (at the end of the 1950s) can be now exploited to bridge that gap and to confirm Levi’s first hypothesis. The comparative analysis that is offered here aims at demonstrating that the texts now trasmitted by the Ripoll collection (R) were the source of three.

In the Chevalier de la Charrette by Chrétien de Troyes, Lancelot manages to complete his quest and saves Arthur’s court from the wicked Meleagant. The young sister of Meleageant plays a key role in this process, by setting him free from the tower where he was imprisoned. Moving from an analysis based on lexicon and narrative devices, the essays discusses the role of the maiden in the plot, the relationship between her and Lancelot and finally the conception of love that the ending of the Charrette presents to the reader.

The present essay takes as a starting point a quotation from Montaigne copied by Leopardi in his Zibaldone on the 23 October 1828, the same year in which he plans to write some “Essays after Montaigne”. This is the only quotation from Montaigne documented in Leopardi’s work, and, therefore, particularly important. Following this trace, the essay studies the affinities between Leopardi’s thought and Montaigne’s skepticism, particularly focussing on the Apologie de Raimond Sebond, a crucial texts of the Essays (II, 12), from where the quotation is taken. On the one hand Leopardi agrees with Montaigne on the critique of knowledge and imagination, on the other hand his skepticisn is tragic, not joyful as Montaigne’s. This different intellectual and moral stance is illustrated through an historical intepretation of the image of the funambulist, used by Leopardi in his comment on Montaigne’s text.

The paper discusses the main features of Aimeric de Peguilhan’s lexicon, using statistical data and focussing on particular cases. Digital mark-up on textual corpus, from standard lemmatisation to varia lectio, has allowed for the first time to operate an exaustive analysis of the lexicon, extended also to the manuscript tradition.

A critical edition of the famous song composed by Richard Lionheart (Ja nus hons pris ne dira sa raison) is provided in this article. Furthermore, an in-depth analysis of the historical circumstances that led to the capture of the king of England is given in the introduction as an aid to the interpretation of the political allusions contained in the lyric. Specific attention is payed to verify the identification of William of Cayeux as one of the addressees of the song. The critical text is founded on a partially revised interpretation of the manuscript tradition and is furnished with a complete apparatus, a wide commentary, a glossary and a transcription of the melodies.

This paper focuses on two characters of Italian chivalric literature – Astolfo the “fool” and Gano the traitor – in some works composed between the 14th and the beginning of the 16th century. In these poems, the effectiveness of the representation is based on a renewal of 396 Summaries the traditional characters. In particular, the Orlando innamorato by Boiardo and the Mambriano by Francesco Cieco from Ferrara show two different models of the court: Boiardo discusses the dangers and the virtues of power and its management; almost twenty years later, Francesco Cieco portrays an alternative model of the court, finding (or imagining to find) strategies to control and restrain its crisis.

This note considers two cruces of the Mare amoroso, two allusions never clarified by its interpreters. One concerns the identification of «stella», always understood as a star, but de facto it is a fish whose burning properties are documented in Pliny and in the encyclopedias of the 13th century. The second concerns the word «bambezza» understood either as ‘bianchezza’, or a possible ‘bambinezza’. A quotation from Albertus Magnus De animalibus risolves the dilemma in favor of the second interpretation.