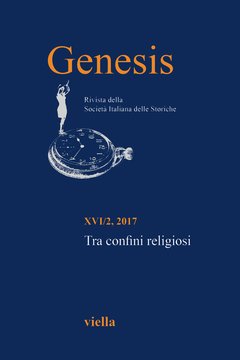 This special issue of «Genesis» analyses, from a gender-sensitive perspective, the impact of crossing confessional and religious borders, of mobility, and of voluntary migration on definitions (and/or self-definitions) of religious identity. Against the backdrop of recent historiography on the mechanisms of the discursive structuring of space on one side and on global entanglement on the other, the authors tend to overcome a fixed delimitation of religious borders. The essays contained in this special issue present a series of case studies that range from the medieval era to the present. They investigate the strategies used to adapt to a new context, the conflicts generated by the encounters between different cultures, and the estrangement provoked by confrontation with a different culture. Analyzing the effects of mobility permits the authors to examine religious practices that assimilate into or differentiate from new surroundings. The specific focus taken here helps us to reflect on the “performative” aspects and fluidity of the construction of religious identities.

So far, the gender perspective has not been an avenue of study regarding pilgrimage to the Holy Land in the Middle Ages. The subject of female pilgrimage is challenging because of the lack of sources produced by women. With the help of a corpus of over 100 pilgrimage accounts dating from 1320 to 1512, written by Christian pilgrims from all over Europe, this essay will shed some light on late medieval female pilgrimage to the Holy Land. It also supplies reflections on the type of information that sources provide (or do not provide) and a hypothesis to counteract the reticence of the sources.

In the last decades, historians have become increasingly interested in the topic of urban and extra-urban mobility. Besides, recent historiography has started to consider urban citizenship in a broader sense and not only as a legal status. In this context, the article focuses on women’s spatial and social mobility in the multiethnic and multicultural city of Venice. Mobility has been examined both as migration as well as in terms of intra-urban paths and social changes. The analysis starts from a significant case study that has been reconstructed through heterogeneous documentation. The subject is a Greek woman who did not travel long distances, but re-shaped her own “identity” several times in relation to different institutions. This was possible through the use of multiple forms of belonging: to the Greek community, to familial and professional networks, and, more widely, to the Venetian urban space. Comparing self-representations with institutional definitions of individual and group identities, we can question our categories of “stranger”, “citizenship”, and, above all, can interrogate the very concept of religious identity.

On 7 August 1727, eleven Ursuline nuns departed from Rouen to found their first community in New Orleans. The Relation du voyage des dames ursulines de Rouen à la Nouvelle Orléans, printed in 1728 by Antoine Le Prevost, is an original and virtually unique example of New World travel literature in that its author is a woman, sister Marie Hachard of St. Stanislas, then a novice. The young nun’s writings, a concise epistolary destined for her father, are part of the established and well-known genre of missionary travel narration, to which historiography has dedicated a great deal of attention. Her urgent desire to save the souls of the “poor savages” is clear, her observations comparing their respective ways of life are striking, and her descriptions of fauna and nature are extraordinary. To educate and to correct, to save and to cure: these are the imperatives that drove the devoted sisters, in their most classic of genuine vocations, and her report reflects this with singular historical acumen. This essay aims to elaborate on these topics from a perspective drawing on gender and cultural studies.

Is it legitimate to ascribe the term mosque to a hall that has become the headquarters of a cultural association? How does such a designation change the atmosphere of that place? Do gender relations undergo a change as a consequence of such a labelling? In a place that has gained the status of a mosque merely through people’s perceptions, how much weight do the behavioral norms established by ayatollahs carry? The present essay is the result of reflections on these questions that the author tries to answer through a sociological enquiry into a Shi’a worship hall in Turin. The data are collected through qualitative methods such as semi-structured interviews and participant observation.

The Artisan Family in 12th- and 13th-Century Genoa: A Reappraisal
Denise Bezzina