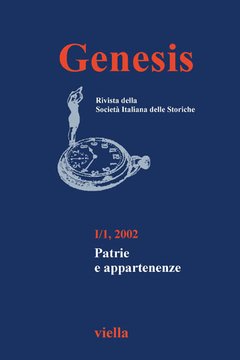 Nation, fatherland, mother country. A lexical analysis
In this paper a lexical analysis is developed on three Italian words referring to the civil membership: nazione (nation), patria (fatherland), madrepatria (mothercountry). These terms are etymologically connected with birth/- generation, and they are strongly associated with social images of mother/s and father/s. Each word is considered in the most relevant contexts where it is used, in order to illustrate its specific connotation. A particular attention is devoted to the compound mothercountry and to its use in literary texts and in the political discourse of the XIXth century.

French or foreigner? The Queen of France between royal dignity and heritage
In France, the position of the queen, who was, at one and the same time, both sovereign and subject, French but nonetheless foreign, was quite ambiguous because of Salic law. Norms regarding succession to the throne excluded daughters from the Capetian heritage yet did not exclude women entirely from power. Thus the queen had a public role which was revealed in her royal dignity as well as a private role which allowed her the power to inherit and transmit. The monarchy played on this duality with an attempt to capture the potential inheritance of the princesses who entered the Captian dynasty through marriage. This expectation manifested itself in the marriage strategies of the French crown.

“Matmazels” in the harem. European Governesses in the Ottoman Empire
This paper examines the experiences of European governesses living and working in the Ottoman Empire. Called murebbiye or enstütris, these were women hired by upper and upper-middle class families associated with the new bureaucratic apparatus to teach their children foreign languages and the new (European) social graces. Governesses also filled a need for social Summaries 296 Summaries capital, prestige, and conspicuous consumption; that is, for this particular class of Ottomans, a governess was not only necessary for preparing one’s children for their future roles, but was in and of herself a marker of the family’s social position, wealth and Westernizing world view.

Belonging to the Italian nation: women’s writings in the 19th century
This article collects texts written by three generations of emancipationist women living in the 19th century and with reflections upon the Italian Risorgimento. C. Franceschi Ferrucci, a catholic author of a famous book about female education, insisted upon the necessity to educate women in order to make them protagonists of reform. G. A. Beccari, editor of the newspaper «La Donna», was driven through her love for Italy to embrace the cause of women. A. Mozzoni, a major representative of Italian emancipationism, declared that women’s support for the “patria” was not adequately recompensed. The law, in fact, continued to exclude them from a wide range of rights. Finally, G. Cavallari Cantalamessa, in a conference on women’s experiences in the Risorgimento held in 1892, maintained that, in her opinion, the nation has its very roots in the home.

For the Nation and for the “Duce”. Stories of female loyalty
Starting from an accurate reconstruction of the unremitted campaign of “popularization” of the feminine figure carried out by the Fascist Party (PNF), the A. revisits the historiography of Fascist attempts to mobilize women for party and nation. This article, moreover, pays attention to some of the more profound reasons why quite large numbers of women joined the PNF after having been members of pre-First World War feminist movements. The well-known category of “consensus” to totalitarianism is seen in a gendered perspective, taking into consideration the theme of faithfulness in its different meanings. The last part concerns women’s opinions about the regime in relation to factors such as social class, political and family background, and generation.

Between Südtirol and Alto Adige: voices from a land of many borders
Today South Tyrol is the northernmost Italian province yet it once belonged to Austria and was annexed to Italy only in 1919. During the Fascist era the Italian government tried to transform South Tyrol into a “real” Italian region – although it was inhabited by a predominantly German-speaking population. After the end of the war, Italy promised to better respect the German-speaking population and to give the province wide autonomy. The rather slow development of this promised autonomy however created new tensions and conflicts. The two authors of this article (a German and an Italian historian, both born in South Tyrol) analyze the complex relations between the two ethnic groups and their feelings of belonging evolving from their own autobiographical experiences.

«A Church in her home»: female and male heretics in 13th century Florence
This article is based on records of the inquisitorial proceedings carried out by Ruggero Calcagni against the Cathar heresy in Florence in the mid-thirteenth- century. From these trials emerge active heretics, their roles and functions in daily life as well as the important positions occupied by women. The women heretics belonged to a variety of social classes and, regardless of their marital status, assumed irreplaceable roles and functions within the heretical movement. Their age and family ties (widowed mothers and children, especially sons) gave many women a recognised status as auctoritas, accepted both by their family and by the heretical group. Others seem to have chosen heresy as a means of constructing a position of power within the family.