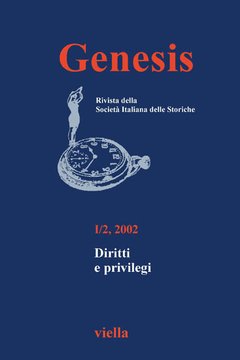 Rights and Privileges: The History of Shifting Meaning in Legal Language
This essay begins by examining the similar meanings of the words right, privilege, and liberty in the legal language of the late Middle Ages. As political and intellectual developments led to the modern notion of egalitarian citizenship based on individualism, right and privilege increasingly took on divergent connotations. This introduction traces that development and asks a final question: does the study of different legal cultures and traditions logically lead to extreme and perhaps dangerous relativism? Is it true that «The rightfulness of an act cannot be judged if not on the basis of the values of the societies which it refers to?».

Rights that Cancel Privileges: History and Women’s History in the Works of Arnold Toynbee
Having examined the relation between a recently published Toynbee’s paper and his greater works, this article explores the applicability of his historiographical method to women’s history, the relation between rights and privileges in Toynbee’s logic and the examples provided in his works. It argues that he fell back on nostalgia for traditional societies in his warnings against women’s campaign for increased rights.

Reflections on Family, Women, and Law in Fifteenth- Century Florence: Ambiguities of a Consilium
In Renaissance civic contexts, law was a device allowing forms of agency to men and women while also serving as an ambiguous realm of meaning in which women were depicted as subordinate or incapacitated. Law mattered; its ambiguity was functional. A Florentine case from the early 15th century shows how four prominent jurists struggled over an inheritance and decided that it went to the deceased’s mother, despite statutory law’s clear preference for agnate males. The case’s consequences can be taken as indicative of a functional ambiguity regarding family and gender.

The House of the Queen: A Political Space for Women in Fifteenth-Century Castille
This essay explores the House of Queen, a political institution for women of the Castilian royal family that developed gradually during the 14th and 15th centuries. This institution provided an effective platform for the queen, princesses and infante to participate actively in politics. This study shows that the role of royal women as political and cultural agents within medieval and Renaissance monarchies was wider and more important than has been previously recognised.

Women and the Poor: The Transformation of a Privilege in Early Modern Piedmont
This essay analyzes a curious and inexplicable incident that occurred in the Piedmont Senate in 1724, which led to the revival of the concept of ‘female imbecility’. During a debate over the right of women to dispose of their own property, women were equated legally with the ‘mentally ill’. The author analyses this episode from different viewpoints beginning with social behavior, asking whether women in Piedmont were allowed to manage their property in daily life. She then explores the transformation of the legal category of “miserable persons”, which included women. At the beginning of the 18th century this group of people still enjoyed legal privileges. During the 1720’s, however, this group was redefined as legally “irresponsable” and in need of protection rather than privilege. The author argues that it was this transformation that made it possible to restrict the rights of women and label them as “imbeciles”.

The Conflict between Universal Rights and Group Rights: The Case of Women
Universal rights are undergoing a crisis in Western societies. The recognition of group identity, with its privileging of difference, is challenging and threatening to subvert the principle of equality. To a certain extent, recognition of group identity is not inconsistent with universal equality, provided that we consider the maximization of individual liberty as the main criterion for evaluating political theory and policy. In other words, a request for group recognition is acceptable in a democratic society when it is necessary for the individuals who share that group identity to feel free and be free. The mere conservation of group identity is not a sufficient aim, and perhaps a bad aim, if it conflicts with individual liberty. Women present a special case. Though women are not a homogeneous group, there is a female identity that has been historically and socially constructed and which largely influences the life and fortune of the individual. Women need social recognition of their identity to enjoy true liberty.

Female prophets and sorcerers
This work analyses several female religious figures – prophetesses and sorceresses – in Roman epic literature of the Augustan Age and of the first century A.D. (from Virgil to Stace). It argues that women in these texts related differently to male gods and male priests. Although they were submissive and obediant to the gods, they were transgressive in challenging the authority of the male priests.

Anthropology, Gender and Slavery (Granada, 16th Century)
The aim of this article is to show the androcentrism of those studies on slavery that have presented slave populations as being composed basically of men and that ignore the important role played by female slaves. It analyzes, as a case study, the slave population of the city of Granada during the 16th century in relation to the Trans-Saharan and Trans-Atlantic slave trade from a gender perspective. This essay explores the proportion of men to women, the productive and reproductive relationships, the sexual division of work, and kinship relationships in the slave population of Granada.