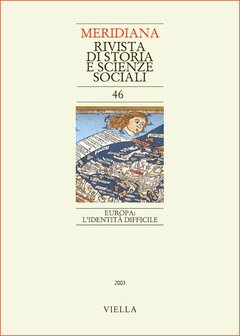 Radici d’Europa
The paper developes a deep reflection on the eastern roots of idea of Europe, from the Phoenician and Egyptian influences to centrality of the Alexandrian culture in the late antiquity and to Asian and African identity of Christianity. From this point of view it seems to be partial the foundation of the idea of Europe on the Carolingian Romània. This historical reflection claims the unity between western and eastern Europe and emphasizes the point of view that the Mediterranean area will be a center of cultural and economic exchanges for the future Europe in a reconciled international situation.

The future of an Artifice: the European Union
Developing an optimistic stance with respect to the advancement of the European Union’s unification process, this essay puts forward the argument that each member state does not loose its identity for the very reason that identity is an out-of-date and, as such, useless element. Politics is based on the idea of artifice, not of nature, so that what is relevant is the goal politics wants to attain, not what nature suggests. Therefore, the attempt to write a Constitution is valuable in itself and not only for the democratic rules it proposes, but in particular as it forces the new community to cancel the idea of national interest, which is still linked to those of nation, identity and, as in the past, of enmity and war. We shall not be afraid of choosing for the European Union the strategy not to join the game of great (military) power politics, but to set itself as the example of a composite, peaceful new subject, lacking political myths.

From ascending to descending subsidiarity: the ambiguous path of the European Union
It is argued that there are two interpretations of the concept of subsidiarity: one «ascending» and the other «descending». These two concepts appear to have shaped the first phase of EU policy and the second, recent phase, respectively. The reason for this change are outlined. The second part of the paper analyzes the consequences that this interpretation has on achievement of the objectives of the public sector. It is stressed that, according to the received doctrine of public finance, the principle has a limited and well defined field of application. Implementation of the principle has the effect of severely reducing the scope for equity policies. The latter are already jeopardized by the globalization process and will be further threatened by consistent application of the subsidiarity principle within the EU.

Citizenship rights and feasible federalism: a reflection on the Italian Constitution and the draft of European Constitution
The Italian juridical and economic system, for a not random coincidence, is at the center of a double flow of pressures: at European level, it takes part in the constitutive phase of a solid and structured public framework, forerunner of new, feasible federal schemes; at national level, there is the challenge of actually realizing the new constitutional scheme based on the idea of a fiscal federalism. In this paper, the author firstly examines the matters to be faced at the internal level. In particular, the ties between the constitutional innovations (introduced with the new Title V) and the remaining part of the Constitution. Two aspects are investigated in-depth: first, the issue of the essential levels of civil and social benefits to be guaranteed on the whole national territory. Secondly, the way in which the equalisation system should be implemented. The domestic analysis is then projected at the European level, to show the essential knots which seem to be settled at this level in the perspective of a reinforcement of the core fiscal powers of the European Union. Between the two contexts, the author identifies a precise link: the idea of political citizenship and democratic participation which lives as much as fed and supported by solidarity and equalisation duties, as shown by the theory and the practice of fiscal and budget literature.

The political unity of Europe: a dream or a reality in progress?
The author tries to answer to the question «whether» and «when» Europe will be a political unity, at the end of a process which, even if slowly and facing many lulls, has been going on since almost fifty years. In the author’s opinion, it will not be possible to frame the United Europe of the future into any conceptual and existing pattern, to frame it into any juridical and political scheme.

Actuarial equity or horizontal equity? The reform of social protection systems in the European Union
Inequality of opportunity derives from mutual interdependence between income inequality and objective and subjective conditions of «disadvantage», which reduce the chances of a «decent life», especially in the case of «high risk» individuals. This paper argues that redistribution, as the by-product of the social insurance provided by Welfare institutions and merit goods provision, is legitimized by the objective to pursue horizontal equity. The Welfare reforms recently envisaged in the European Union, aiming at implementing actuarially fair contracts of social protection, should refrain from pursuing efficiency to the detriment of horizontal equity.

Democracy’s engineers. Consequences and limits of elections monitoring agencies in the process of political change in Indonesia
After former President Suharto‚s downfall in May 1998, Indonesia begun a process of political liberalization that reached its peak with the holding of the first free multi-party elections since 1955. This June 1999 national poll, that was thought by many to be a key-moment in the history of Asia’s U-turn towards liberal democracy, brought to Jakarta tens of «democracy-building» agencies (like the National Democratic Institute) and hundreds of international observers. What this article intends to show is that these «engineers of democracy» had from the start a very peculiar way of understanding processes of political change, nurturing a fetichistic view of elections that equated democratization solely with the «D-Day» of voting. This vision dismissed as irrelevant to the issue of the liberalization journey larger social and political dynamics, such as the ongoing criminalization of political parties (those parties that were then deemed the natural-born champions of democracy, even when they openly disparaged it). Democracy-building agencies indeed had a strong impact not only upon the way Indonesian politics were interpreted abroad, but also upon the drafting of new electoral laws. By reducing democratization processes‚ stakes and meanings to the «free and fair elections» litany, they often missed the point of the moral (hence violent) nature of Indonesian political change at the local level.

Education and landscape protection in the «meridionalista» activity of Umberto Zanotti-Bianco
In this essay the author examines the biography of Umberto Zanotti-Bianco (1889-1963), inside the history of the governing classes during the 20th century. Zanotti-Bianco considers environmental and cultural identity as central elements of the strategy for the growth and development of Southern Italy. The paper analyzes the policy of civic education, from ’10s to ’50s in the Southern regions, in fighting illiteracy, in promoting popular library, in child and adult learning, and also, in protecting environment and cultural heritage. The article emphasizes the importance of cultural policy and, in this point, the author argues the relevance of «meridionalista» idea of Zanotti-Bianco.

Erasmus in a Spanish flat: is there yet a new European generation?
L’Auberge espagnol is a movie directed by Cédric Klapisch in 2002. It represents the story of Xavier, a french economics student in his twenties, who signs on to a European exchange program in order to gain working knowledge of the Spanish language. Promising that they’ll remain close, he says farewell to his loving girlfriend, then heads to Barcelona. Following his arrival, Xavier is soon thrust into a cultural melting pot when he moves into an apartment full of international students. An Italian, an English girl, a boy from Denmark, a young woman from Belgium, a German and a girl from Tarragona all join him in a series of adventures that serve as an initiation to life. The story of this Spanish flat reveals emotions and feelings of a new generation of authentic European citizens which maintains national diversity while generating a common attitude towards social life. The movie is a sort of paradigm of a new generation which has already started thinking as a European generation.