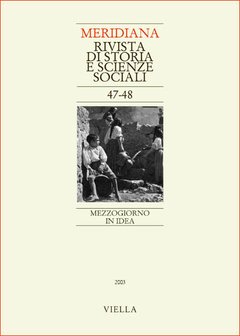 The sociological representation of Southern Italy in the last fifty years
A first glance at the sociological representation of Southern Italy is given through a review of selected essays from the journal Quaderni di Sociologia, published from 1951 through 2001. Italian society is shown as it was described when its Southern villages were studied by American sociologists coming from abroad to understand the moral basis of a backward society. It is also shown as it is looking now, when its Southern towns are joining in the network society. This shifting image is then used as a framework for a reflexive account about an ongoing debate concerning the heuristic value of theoretical concepts as «social capital», «civicness» and «trust» to understand how Southern Italy is changing in the sociological imagination.

The innkeeper and the donkey: the photographic paradigm of Enzo Sellerio
It’s very difficult to place Enzo Sellerio, one of the most representative italian photograper of the postwar period, in the history of photography: his personal interpretation of the pictorial tradition of Sicily, italian neorealismo, european influences, make it impossible to place him in traditional photographic categories. It would be more useful, for historical studies, to insert his work in a very large class like «humanist photography», so that we can define a subjective view of everyday life that, in different ways, is shared by many european photographers after WW2. In this contest, but following his own wiew of life, Sellerio made his personal struggle against rethoric.

Italy’s South seen through the lens: Italian film and television looks at the Mezzogiorno
In this essay, the author, Italo Moscati, director, screenwriter and critic, seeks to synthesize the long, intense and varied relationship that Italian cinema and tv have had with the Mezzogiorno, the Italian South. According to Moscati, the South has been viewed both alternatively, and simultaneously, as Paradise and Inferno, and these visions – he holds - are reflected in the way Italian cinema and television have looked at the Mezzogiorno since the end of World War Two. Interestingly enough, prior to that, says Moscati, no Italian film had ever «featured» the Italian south as a either background or social statement. After the war, this changed, and through the early 1990’s the South and it’s problems of underdevelopment and crime would continue to engage the talents of Italy’s major firm directors. In contrast to all this, says Moscati, is Italian television’s failure to date to directly examine the problems of the South in its own dramatic productions.

Anthropologists and «Mezzogiorno»
This study considers the different views adopted for the notion of «Mezzogiorno» advanced by a conspicuous number of anthropologists carrying out research on Southern Italy in the post World War Two period. The work of these researchers is accounted for within the context of their distinctive theoretical perspectives and schools of thought. Particular attention has been paid to the absence of exchange between Italian and foreign scholars which hampered the emergence of the most fruitful aspects in the analytical works besides contributing to the diffusion of stereotyped portraits. After offering a concise survey of the crucial themes and the different ways of dealing with them, the A. proceeds to singling out the more interesting perspectives which allow for a comprehensive vision of the South of Italy, less uniform and more varying than the one portrayed by other scholars.

The representation of «Meridione» in contemporary Italian novel (1941-1975)
Focusing in seven of the most remarquable italian writers of the century – Elio Vittorini, Vitaliano Brancati, Elsa Morante, Alberto Arbasino, Raffaele La Capria, Giuseppe Tomasi di Lampedusa and Leonardo Sciascia – the essay tries to map the representation of the «Meridione» contemporary novels, from the fall of Fascism to the end of «questione meridionale» in the '70s.

Farinacci was considered
In this paper we deal with Roberto Farinacci’s political activity. We enphasize on the relationship between Farinacci with Giacinto Motta, the patron of the Italian eletrical company Edison, which was close to the Credito Italiano Bank. Our aim is to show that this friendship caused the Farinacci’s attack towards Giuseppe Toeplitz, the chief manager of Banca Commerciale, the biggest bank in Italy at that time. Essentially there are two main issues characterizing their friendship: the former one is that Farinacci’s attack was justified by his fascistic intransigence that was against the biggest financial groups. Those groups were an oligarchy in the previous liberal government. This was very contradictory because Motta actually belonged to that oligarchy apparently damned by Farinacci. The second issue is not so straightfoward: it is related to the unfreezing of the biggest Italian banks, which was carried out strogly towards the Banca Commerciale while it was carried out softly toward the Credito Italiano. In this way Farinacci was considered by some fascists like the winner of the fight against the Banca Commerciale. Now it is crucial to stress two final remarks. The first one is that Farinacci is again close to Mussolini’s policy; in fact Toeplitz is attacked at the same time by Farinacci and by Mussolini, even if those common goals between the two of them will be totally common only after 1936. The second remark is in the twofold personality of Farinacci: he was very useful for Mussolini’s goals. In fact he was, at the same time, intransigent to Toeplitz and smart to keep on good relationships with the old liberal financial oligarchy whose Motta was one of the best representative.

The silk in Southern Italy. Architecture and techniques for the silk production between Eighteenth and Nineteenth century.
The architecture of the silk factory in Southern Italy and the diffusion of the technologies and the technical knowledge connected to the development of the silk production between Eighteenth and Nineteenth century are the principal themes that the author has tried to deepen in this article. From the Royal Factory of S. Leucio (Caserta) to the Royal Schools of the Carminello (Naples) and of Villa St. Giovanni (Reggio Calabria), up to the Setificio of the Royal Poorhouse of Palermo, this paper discloses and analyses not only the dynamics and the principal actors of the progressive diffusion of the piedmontese techniques of silk-throwing, but also the cultural oppositions and the tax advantages of local entrepreneurial élites, which hampered, in a first moment, their introduction in the Kingdom of Naples. The throwing machine «alla Piemontese» - as plant (silk-mill) and as architecture - is meant also as metaphor of a new type of productive organisation, that is able to break the social balance and market equilibrium of the entrepreneurial environment of Ancien Régime and to re-draw the relationships between city and country, prefiguring, in such way, logics and practices, but also ambiguities and rhetorics, that will characterise the gradual process of industrialisation of modern Europe in the second half of Eighteenth century.

Gaetano Mosca: gli anni palermitani (1858-1887)
In 1917 Giovanni Gentile asserted that from the cultural point of view Sicily was a segregated island. He believed that its relations with the rest of the world were non-existent. Such idea has been very influential for a long time. Only after the WWII many efforts were made on the part of sicilian historians to demonstrate that a well developed web of relations existed between Sicily and Europe. This paper argues that the early production by Gaetano Mosca gives further support to the critics of Gentile. In particular two expierences are analyzed: the activity of «Rassegna palermitana», a fortnightly journal to which also Vittorio Emanuele Orlando and Francesco Scaduto contributed. Indeed, this was the occasion in which this «trio» – which gave birth of the italian political science and public law – made its first appearance. The second experience is Mosca’s 1882 doctoral thesis on the «Elements of nationality», which according to the interpretation offered in this paper, echoes many of the arguments set by E. Renan in his acclaimed book «What is a nation?», published in that same year.

The new land use plan for Rome and the waste of the Roman landscape
The subject of this article is the new land use plan for Rome. This topic is linked to the more general crisis of Italian city planning that, according to the author, started at the beginning of the 80’s as a consequence of deregulation and the predominance of private interests over public ones. The article denounces, in particular, the ongoing and unrestrained destruction of the Roman landscape. The countryside around Rome was one of the most extraordinary pictures of Italy, well known to travellers and artists who visited the capital during the last centuries: a wide empty space dotted with imposing remains of Roman aqueducts and monuments. This landscape is disappearing. From 1961 to 2001 the inhabitants of Rome have increased by 17%, yet there has been a 260% loss of natural areas and agricultural land. The new land use plan, completed in 2003, does not restrain this trend, which instead has accelerated even while there is no need of new construction. The article also deals with the area of the Fori Imperiali, the great archaeological site in the centre of Rome that during the 30’s was bisected by a modern street at the wish of Benito Mussolini so that the troops could parade with the Roman ruins in the background. In the recent past a convincing plan was devised to demolish the fascist street and to set up an archaeological pedestrian area in the centre of the modern city. This plan has been shelved and traffic continues to cross the Fori Imperiali area, damaging its monuments and causing unnecessary congestion in the most ancient part of Rome.