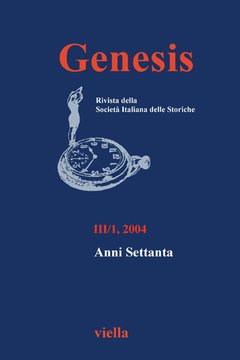 Rethinking the 1970s. Violence thirty years later
This article points out that one of the reasons for the dwarf of historical work on neo-feminism is the lack of analysis on the relation between feminism and violence in the Seventies. I have investigated these issues in two areas: on the one hand the campaign for the de-penalization of abortion, on the other the political demonstrations and the assaults on factory supervisors and neo- Fascists from leftists radical groups. Concerning abortion the feminist movement often simplified the complex experience of women, while it was totally ignored the issue of the physical suffering of the fetus that recent studies in physiology and pre-natal and neo-natal psychobiology claim starting from the 17th week. On the second issue, although many women were part of both political demonstrations and violent assaults, feminists have simply underscored the dogma of women’s opposition to violence. In the past thirty years the debate on women’s responsibility for the political climate and behaviors of that time has been almost non-existent. The author urges more scholarly research on this peculiar problem both within the framework of that period and in relation to other topics and other ways to recount political violence

Catholics women and men confront abortion: the changing balance of the Italian Republic
The essay argues that women’s votes and their political choices were crucial in determining political outcomes and social developments in the history of the Italian Republic, since its foundation in 1946. More specifically, the article studies the main social and political changes which took place in Italy in the 1970s, namely secularisation of social life, the spreading of the feminist movement and the political challenges on divorce and on abortion, as well as the way they were addressed by catholic women and men. The defeat of the democratic catholic movement which took place over that period prompted a change in the political landscape which is yet ongoing.

Feminism/feminisms: notes for a future history
The starting point for this article is a survey on the 1970s feminist movement literature from which it emerges that this movement has lacked full historiographical attention. The core of the study is the Italian case, although with reference to the international context. This article takes into consideration certain historiographical issues, starting from an investigation of the meaning to ascribe to the phrase “feminism in the 1970s”. The first issue concerns the relation and the differentiation between feminism, meant as the political expression of women’s subjectivity, and the social movements of the Sixties and Seventies, with a focus on the facts of 1968. The second centers on the question of the transformation of feminism itself in the course of the Seventies and Eighties, mapping the different phases that have taken the history of contemporary feminism beyond the Seventies. In this framework another issue becomes relevant: the relation between feminism and its many offspring shows that there is not only one feminism and that this movement has been characterized by multiple and different outcomes.

«The good, the ugly and the bad»: the epic of the Seventies between history and memory
This intervention addresses Italian political and social movements of 1970s from three main angles: the function of the "1970s generation" and its testimonies in shaping the reconstruction of those movements; the official memory of that period; the role of political violence in defining the conflicts as well as their legitimacy as objects of historical analysis. In doing these, we mainly use films and novels which, in 2003-2004, have imposed themselves as the main vehicles to open a debate on Italy's 1970s history and memory. Cinema and literature show the sensibility of cinema goers and novel readers towards the mentioned topics and they anticipate the shared necessity to reopen in historical terms the reflections on conflicts, ideologies and violence.