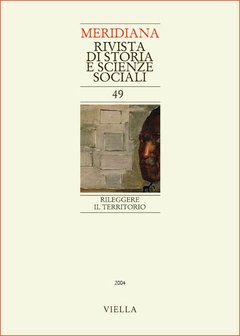 How spaces think. The past (and present) of a rural park: Alta Murgia in Apulia
The essay puts in question the identity space-society as a tool for both ind??? and planning territories, widely adopted by planners of the last decades of the XX century in order to avoid the funcional and expert approach of the «modernism». The long history and the now-a-days conflictual situation of a territory recently officially declared «rural park». The Alta Murgia – the South of Italy – sheds light on the dilemmas caused by this attitude and might offer some hints of the possible results of an approach that underlines the autonomy of the special dimensions.

Algerian Routes, urban spaces. Examples of emancipation and deterritorialisation of middle classes in global market
Based on fieldwork in some Mediterranean and North-european cities (in particular Marseilles and Istanbul) this paper wants to describe how the process of globalization fragments and shapes the urban social space. The development of market places and transnational trade connecting South, East and North, the combination of migration routes, disaporic establishment of migrant minorities (Moroccan in Italia and Belgium, Turkish and Libanese in Germany, Algerian and Sephardic in France, Kurdish and Armenian in Istanbul….), in connection with the delocalised industrial areas (Tunisia, Morocco, Turkey) and the old «industrial districts» in Italy and Spain, compose an economy which it is impossible to describe just with notions like «informal economies». Taking account of the ability of entrepreneurs to make money with products, no doubt that these economies are capitalistic, but we are dealing with a capitalism without firms, without financial capital, without states, just organised on the base of local, social and personal arrangements. It is what we could call a bazaar economy, according to the Geertz explanation of the Moroccan suk: a bazaar economy is an integrated economical structure based on managing strategical informations as an interactive process. Face to face and personal networks are the key of the division of work, to the quality appreciation and «the best price» making. It is in this way that some big and «modern» Mediterranean towns take part to the globalisation process: it would be impossible to appreciate and describe the forms of their local spaces without considering their intimate connections with much wider spaces.

Networks, regional development and democratic control
The networking literature has burgeoned in recent years within a complex cross-disciplinary field spanning sociology, economics, geography and planning. In particular, networks have been analyzed as organizational expressions of globalization, linked to claims about the rise of the network society. Concepts of networks and networking have been accepted as positive, and sometimes also as progressive or radical within both social science and policy discourses. With respect to urban and regional policy, the European Union has been promoting networks as a new mode of governance, at a variety of spatial scales However, little attention has been paid to the theoretical implications of using the concept of network as a social metaphor or to the operation of actually existing networks, as a result of conceptualizing networks in ways that deny their constitutive inequalities and asymmetries. This darker side has been pushed into the shadows by the rhetorical emphasis on the benefits claimed for networked organizational forms.

Network complexity and imaginative power of the strategic planning of the space
This paper explores the imaginations of place and spatial organisation and of governance mobilised in recent experiences of strategic spatial planning for urban regions in Europe. Drawing on examples of such experiences, it examines how far these imaginations reflect a relational understanding of spatial dynamics and of governance processes. Spatial imaginations are assessed in terms of the nature of the spatial consciousness expressed in a strategy, the way the multiple scales of the social relations of a place are conceived, and the extent to which relational complexity is understood and reflected in a strategy. Governance imaginations are assessed in terms of how the relation between government and society is imagined, how the tensions between functional/sectoral and territorial principles of policy organisation are addressed, and what assumptions are made about the nature and trajectory of transformative processes in governance dynamics. The paper concludes that signs of a recognition of the «relational complexity» of urban and regional dynamics and of territorially-focused governance processes can be found in these experiences, but a relational understanding is weakly-developed and often displaced by more traditional ways of seeing place/space and governance process.

Territories of innovation. Practices and actors of integrated planning in Apulia
This paper focuses on the relationship between «area-based integrated actions » and the traditional spatial planning and development modes in Apulia, southern Italy. These actions have recently spread in public policy arenas, introducing new discourses often centred on simplified mix of key-words such as local capacity building, stakeholders involvement, shared visions. After having experienced a phase of enthusiasm for the potentials of these approaches, it is important to look into on-going practices in order to shed some light upon a number of basic ideas permeating their underlying approach. Four cases studies are interpreted using three points of view: actors’ inclusion/exclusion in/from decision-making process, agreement/disagreement on spatial vision, inside/outside the concerned «locality». The paper highlights the importance to investigate in depth which actors are actually involved and why, what kinds of territorial visions they hold and create, which sort of ‘locale’ they produce in the interactions that take place during the processes, and if and how these interactions are able to bear upon well-established spatial planning and development practices.

International 'good practice' and local action: conservation and change in a slum upgrading project in India
Despite the international rhetoric describes best practices as effective models for local improvements, much critique has been moved to that concept because of its exogenous rationale and the risks of inhibiting local processes of change. Instead of taking one of the two positions, the paper will argue for a more nuanced interpretation of the relationships between global models and local capacity to innovation and change. Building on a detailed analysis of a slum upgrading project in India, which received several best practices awards for the participatory model of governance employed, the paper will analyse a twofold dynamic favoured by the project at the local level: on one side the stable consensus gained by the project has been used by the local bureaucracies to strengthen their global alliances and to mask their attempt to preserve local power; on the other, it has been used by slum dwellers as a starting point to develop empowerment practices in the background of the project. Finally, the relationships between these multilayered dynamics of conservation and change and local processes of governance change will be discussed.

Two accounts of taking action
The theme of this paper concerns the place of planner’s knowledge in the government of territorial transformations. Here, we assume that this old problem can be discussed through some local stories. In stories, the kind of questions we raise are usually put as questions about communication, digression and construction of a language able to connect what we can see and say about territory with matters around production, mediation, institution. We shall tell two little histories on the Adriatic territory and its plans: the first one concerns the beach of Sottomarina, near Chioggia; the second one the river Pescara. The two stories suggest that the planning job is (for a large part) a job around cultural meaning (or invention of the subjectivity of the territory). The mutual implications of politics of identity with empirical investigation call our attention to post-colonial discourse: a field, articulated and composite, of cultural anthropology.

The Allies and the Mafia: an infamous pact?
Thanks to a thorough historical study and accurate documentation, the essay refutes the thesis according to which the Allies stipulated a secret alliance with the Mafia on landing in Sicily in July 1943. A thesis which from time to time is maintained in support of the notion that the Mafia is the outcome of obscure plotting rather than a product of our society.

Ageing and funding systems: actual problems and misleading solutions
The reforms introduced in the Italian pension system during the 90’s have so significantly reduced the amount of the perspective pensions as to spur serious perplexities on the ability of many retired people to enjoy a decent standard of living. In spite of this it is widely argued that the pension system in Italy will be financially unsustainable in the long run. The suggested solutions usually involve raising the age for retirement and the rentrenchement of the public pay-as-you-go system with a corresponding extension privately funded pensions. The article argues that the theoretical and empirical arguments in support of those two recommended measures are weak and one-sided. Indeed, given some features of the Italian economy, they might have negligible or even negative effects.

The Kasbah: relics of a past we have to safeguard?
The Kasbah of Algiers is one of the oldest and most important urban centres in Algeria. In recent decades, its architecture has been degraded, transformed and damaged. It has acquired the role of a satellite within the urban system as a whole. Only now are private and public entities beginning to adopt a different approach towards initiatives affecting the Kasbah, with concern for its conservation

Political space and identity: some reflections on current debate
Focusing on Beck’s sociological analysis of global migration fluxes, the essay tries to underline the main trends of contemporary debate about the relationship between political space and identity. It deals particularly with the theoretical critique of the so called «territorial fallacy» and with the new categories elaborated by the contemporary social sciences in order to conceptualize the dynamics of the global society.