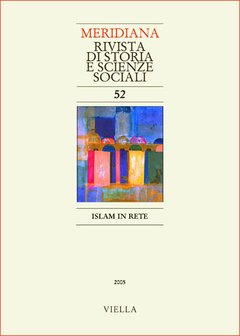 The War in the Net. Israeli and Palestinian Web Sites
Making allowance that Internet has represented a fundamental bend in the relation between historiography and the public use of history, this article wants to study in which way certain topics and problems of the Arab-Israeli conflict are faced from a selection of Palestinians and Zionists oriented web sites. Particular attention is given to the rhetoric strategies and to the continuous dialogue between some of that and the traditional historiography.

Ramadan in TV: analysis of a television ritual in an emigration context
This article analyses the ritual of Ramadan using the methods of media ethnography. Central themes are the performance of Ramadan in contemporary TV and its fruition in an emigration context. The author’s intent is to show the central role that the Arab national televisions, especially the Tunisian national TV Tunis7, play during Ramadan. In fact national televisions render the celebration of the ritual an easier task in both national and transnational contexts, by supporting its practice. Referring to some classical studies concerning the anthropology of ritual, the article highlights the modalities of construction of the ritual’s ‘sacred’ times and spaces, through precise strategies enacted by televisions and viewers. The notion of space, in particular, reinterpreted through Meyerowitz’s notion of ‘place’ and applied to Ramadan, inscribes the television ritual within the complex category of rites et rituels contemporains.

Islamic Mysticism: reflections on the practices and disciplines of a contemporary Sufi order
This article stems from some questions and reflections born during the presence of the author in Khartoum, in the occasion of the annual festival of Shaykh Mohammad Uthman, the saint and founder of a notorious Sudanese Sufi order, the Tariqa Burhaniyya. The order collects disciples worldwide and counts among them many converts that annually gather during this celebration, bringing together their differences in the practice of the sufi path. The text tries to highlight the elements that enable the methods of spiritual growth proposed by the Tariqa to be rearticulated by the individuals, back home, in their proper and local contexts of life, although keeping a tight link with the central organisation. The Tariqa proposes a method of spiritual exercises, a sufi path, that is extremely formalised and organised by the Shaykh but that, at the same time, leaves great autonomy to the disciples concerning the integration of their spiritual path with daily life and contexts. The hypothesis is that the order proposes a method that concentrates on the ethic formation of the individual, through moral and corporeal disciplines rather than on a rigid adherence to the rules of the Islamic law. The attention that the method of the Tariqa Burhaniyya devolves to the practices of formation of the disciples enables the individuals to incorporate a Sufi attitude that moulds everyday life and can be easily rearticulated with the everyday practices, in different contexts. The article uses and reinterprets, in this sense, the theories of incorporation and of rituality as transformative practice, theories that have lately been introduced in the study of Sufism in order to reintegrate mystic theory and practice.

Urban development in Jordan: the case of Amman
The author's aim is to understand the inner determinants of the huge expansion of Amman city and its hinterland during the second half of the last century. Among others, the author emphasizes the role playes by three elements: i m m igration of palestinian and lebanese refugees; immigration of peasants from other arab countries in search of jobs; the economic hegemony exerted by Amman on other jordan towns.

From the Koran to the Web. Amru Khaled career in the Media World
What are the consequences of globalisation on the production of Islamic knowledge in Arabic? Amru Khaled's career, style, communicational strategies and success with audiences are symptoms of the emergence of a new kind of «religious man». Educated in accountancy and marketing more than in religion, the Egyptian television-preacher uses satellite TV, Internet, books, videotapes, dvds, conferences and charity events to attain a wider audience including not just Egytpian Muslims but also non-Arabic speakers and those generally interested in religion. In the article we will analyse in detail his communicational strategy as well as its social and political consequences.

Islamic fundamentalism
This article outlines the history of Islamic fundamentalism (according to the definition of this concept framed by the Fundamentalism Project and other authoritative works) dealing with its main ideas, the movements they inspired, and the political structures in which these last acted. Finding its harbingers in classical writers such as Ibn Taymiyyah and in the reawakening movements of the 18th and 19th Centuries, contemporary Islamic fundamentalism conventionally begins in 1928 with the foundation of the Muslim Brotherhood in Egypt. The article follows its evolution throughout the 20th Century, paying particular attention to the role played in this process by some crucial events (the Six-Day War, the Iranian revolution, the Soviet invasion of Afghanistan, and the Gulf War) and the strategies pursued by both international powers and Middle East regimes; it argues that a more varied and adaptable approach to fundamentalist movements – with the inclusion in democratic games of their moderate wings, at least in sufficiently stable political systems – could prove a strategy more efficient than indiscriminate repression.

Change without democratization in the Arab world
The article argues that democratisation processes must be assessed structurally, that is in terms of the institutionalisation of the participation of all social interests in fundamental political and economic decision-making. In that perspective, the political change that has been taking place in the Arab World in the last three decades does not lead to a process of democratisation. Nor are recent reforms preliminary to it. They are functional to and legitimise a restructuring of the power system that does not change the authoritarian nature of the Arab regimes, but – on the contrary – contributes to their continuation while, at the same time, effectively excluding large part of the population from an active political and economic role.

Economic Reforms and the Process of Democratisation in the Arab Countries during the last decade
The article discusses the recent economic developments of countries located in the Mediterranean basin in the aftermath of the Barcelona Declaration (November 1995), which established the Euro-med Partnership. The Declaration represented the first coherent and shared attempt of integration with the European Union countries. In this respect, our contribution focuses on: (I) evaluating the Mediterranean country economic progresses, by means of a comparison with the experiences of other emerging economies, like the Asian developing countries and the Accession countries; (II) singling out the most relevant institutional reforms that these countries are undertaking in order to grasp the benefits of the integration with advanced economies. The article concludes that the Euro-med partnership has.

Planning, environment and democracy: a discussion from different scientific perspectives
On January 29th, 2005 Meridiana hosted a debate on Planning, environment and democracy. The debate was an opportunity for scholars working in different fields – Mauro Agnoletti, Piero Bevilacqua, Gabriella Corona, Vezio De Lucia, Antonio di Gennaro, Maurizio Franzini, Edoardo Salzano – to speak about the difficult relationships between territorial planning, development problems and environmental protection. The issues they discussed include the dialogue between different scientific points of view in the planning decisions, the difficulties of the democratic institutions to represent environmental sustainable interests, the different use of natural resources in Tuscany and in the South of Italy, the effects of environmental exploitation on the welfare of the citizens, the economic advantages of environmental protection, the crisis of the concept of general interest.