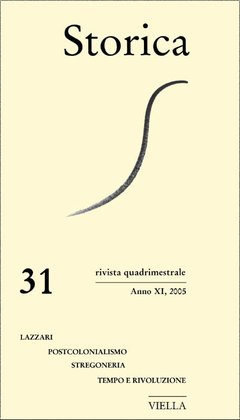 Discorsive transformations and social identities: the «lazzari» case
Foreign visitors to Naples in the 18th Century gave accounts of a certain kind of destitute homeless population termed as «lazzari». Originally portrayed as the unruly and dangerous scum of the city’s lowlife, the lazzari undergo a transformation and are subsequently viewed as the prototype for a particular Mediterranean identity: folk who get along with little yet get the best out of life. In reviewing the various changes of outlook that in time led to the crystallisation of the «lazzaro» stereotype, the author attempts to demonstrate how the lazzari or lazzaroni cannot be taken as representing a specific social class that was twice seen to play a political role (in 1647-48 and in 1789), but are rather an expression of a political tradition that is responsible for a number of «social» arguments and representations that finally end up creating representations and «social» subjects.

The time of a revolution: a historiographic review
The concept of time in the historical representation of the French Revolution has taken hold, at least since the end of the seventies of the twentieth century, as a conceptual category capable of describing the act of revolution as the ultimate creative process of a modern political culture. The essay offers an essentially introspective point of view, in that it is based on the contemporaries’ experience and perception of themselves. To this extent, the analysis of the regenerative metaphors reveals features of a complex anthropology, in which an opening towards the future and the pedagogical concern for the citizens of tomorrow coexist with a sense of history and historical memory in the making, despite all appeals to do away with the past. The subsequent step where politics have to give way to a constitution, which clearly introduces the problem of how to ground a revolutionary constitution, opens the door to the unavoidable complications implicit in the dichotomy between innovation and conservation, autonomy and heteronomy, freedom of choice from forefathers and the constraints that are imposed on posterity. Yet behind this canopy, there is nothing. An utter lack of historiographical interest for the category of political generation, and the absence in late-eighteenth century revolutionary France of any conceptual history which, in the footsteps of Koselleck’s later teachings, might view generation no longer as a sociological notion or a criteria for historical/literary classification, but finally as a concept in its own right, an intermediate and complementary temporal structure compared to the event based structures or the more extended concept of history viewed in terms of historical periods. The essay dedicates a fair amount of its analysis in attempting to assess the meaning of this gap in historiography.

The military and the Fascist rise to power
The failure to produce a general outline of the relations between the military and the fascists, the actual connections between the military command and paramilitary Fascist squads, and the participation of regular officers in local fascist groups, has for a long time left a gap in the historical representation of Italy between 1918 and 1922. With the typical lack of sensibility that has marked Italian historiography for so long where the social and cultural aspects of the military issue were concerned, the scant literature dedicated to the army’s role following the Great War has scarcely gone beyond a mere technical analysis of the system, a description of its professional environment in its narrowest sense or of its doctrine. The details concerning the involvement of the regular military forces in the political struggle, the strength of military public opinion, and the expectations, of a psychological nature, instigated within the officer corps following the Victory, have often been overlooked or merely hinted at when referring to those few well known memorandums or journals that broach the issue. It is however very difficult to reach a complete understanding of the crisis that overtook Italy’s liberal movement without undertaking a painstaking reconstruction of the process that led to the parting of the ways between the political and military powers, a consequence of the gradual political manipulation of the armed forces, coupled with actions designed to throw discredit on the liberal leadership amongst the rank and file, that subsequently resulted in the military community essentially joining forces with the Fascist movement.

Witchcraft and psychoanalysis
Many historians have learnt the following from Emile Durkeim: every time a historic phenomena is explained with direct reference to a psychic condition we can be sure that this explanation will turn out false, the cause of any social event being rooted in previous social events and not in states of individual consciousness. This being the case, how did it come to pass that people in many parts of Europe, well known in their communities as either neighbours or next of kin, could be accused of witchcraft and burnt at the stake as witches? How can we answer such a question without rooting around among the passions of the subconscious? And how can we not allow that there are aspects of human nature that are long lasting, just as there are aspects of physiology that are essential to it? If historians proclaim that the effects of primal emotions, essential for human existence, cannot be known, won’t they then be forced to use psychological models based on common sense for their explanations? But common sense underestimates the extent to which deep irrational feelings imbedded in the subconscious may determine human action – and it is therefore hard to see how any kind of history of witchcraft or religion for that matter may produce satisfactory results without exploring this dimension.

Historical time and political semantics in postcolonial literature
The article sets out to discuss the contribution that so called postcolonial studies can offer to historiography. In the context of the efforts dedicated to redefining the contours of the various disciplines that in recent years have particularly concerned the category of world history, the postcolonial critique has made it possible to introduce what might be termed a «Kantian» shift, directly affecting, and renovating, the modes of representation of time and space in the «telling» of history. The author provides a number of examples, with particular focus, as far as historic time is concerned, on the developments of the Indian school of historiography rooted in the subaltern studies. The review of the space-time coordinates of modern history that the postcolonial studies introduce also carry considerable influence on the conceptualisation of those subjects that have experienced modernity from a subordinate and antagonistic position: the impossibility in a colonial context of pigeon-holing the political and social movements of the «subaltern» populations within the linear framework of the great historic narratives (based on concepts such as citizenship and wage labour) introduces methodological problems and raises theoretical and political issues of great importance and with a discussion of these aspects the article draws to a close.

Baptisms, soul, identity in the modern age.
Taking as its starting point two recent books by Marina Caffiero and Adriano Prosperi, this essay discusses the role played by baptism in the definition of personal, religious and social identities in the modern age.