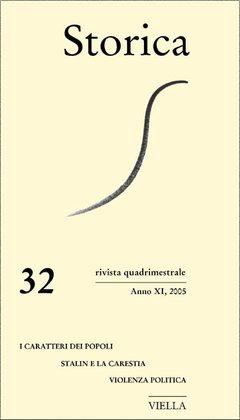 The characterisation of peoples in ancient treatises of physiognomy
In ancient treatises of physiognomy, the characterisation of peoples, mainly connected to spatial differentiation and a hierarchical vision of humanity, is presented as a scientific form of knowledge, based on natural and objective criteria. The essay suggests a cognitive approach to this knowledge: an analysis of how this characterisation was established, and how philosophers in ancient times legitimated this knowledge through the theory of signs. Subsequently the article focuses on the social role played by physiognomy and its use as an instrument to manage and control men. The characterisation of people ever since antiquity has been a form of knowledge that was in the hands of whoever wielded the power, a store of opinions and experiences without any objective validity, as the sceptics of the past have already proven, by underlining the limitations of all the attempts to represent the world or to achieve identification.

Stalin and the famine of the early thirties
The essay analyses the personal role played by Stalin in the famine of 1932-33, which one may define as being «Stalinian » seeing as the policy of the «great leap», which Stalin was one of the main instigators, was the cause of it and because Stalin himself had the power to take decisions that in 1932 and 1933 could have improved the situation or made it worse. Having briefly discussed the causes of the phenomenon and its connections with the policies introduced in 1929, the author moves on to analyse the behaviour of Stalin during the actual famine period, and which he first learnt about at the beginning of 1932. He then moves into the crucial, yet rarely studied area of the Stalin’s behaviour as an «operating dictator», meaning a dictator who, unlike Hitler, is actually engaged in the day to day, operative management of the countries’ business. He initially dwells on Stalin’s policies during the famine, and in particular on their repressive elements, before moving on to discuss the reasons for Stalin’s extremely heavy hand in his dealings with the Ukraine and the northern Caucasus. The author then asks himself how much Stalin actually knew about the famine, and analyses to this purpose different types of documents that reached the despot, with specific reference to the letters of party and state representatives and the OGPU reports. Having reached the conclusion that Stalin received accurate information on the scale and spreading of the famine, the essay attempts to reconstruct the mythical representation that Stalin built up around it for himself and his followers, and the decisions he took based on this reconstruction.

Italy in the Seventies. Movements, political violence and armed struggle between memory and historiographical representation
The essay presents a critical appraisal of historiographical representation during the Seventies and the «movement period» in Italy, while attempting to pinpoint new investigative trails and new methodological approaches that might analyse the genesis and the transformation of the movements and opposition cultures in depth from a cultural and a social perspective, with particular emphasis being placed on the issue of political violence.

Mitterrand and l’Histoire
Ten years after the disappearance of the French President François Mitterrand there is a number of publications and image reproductions that pay tribute to his complex personality both as a person and as a statistician. The essay focuses mainly on the relationship that Mitterrand entertains with history, in essentially two main areas. Firstly, how Mitterrand’s life spanned and was influenced by as many as for different political systems (three republics and the Vichy regime) to such an extent that his may be termed an «exemplary life» given it’s political and personal contradictions; in this respect, the only possible comparison is with Charles De Gaulle. Secondly, the reader is asked to consider the use that Mitterrand made of French history, achieved through the careful selection of instances, places, personalities, emblems. A conscientious manipulation that was developed to a much greater extent than any of his predecessors of even his successor Chirac ever managed. Not only did Mitterrand redesign a part of Paris’s urban layout and redefine ceremonies and recurrences in the national calendar, but during his last years of sickness and in preparation for his two funerals, the state funeral and the private ceremony, he reinstated the right of the double body of the king, analysed by Ernst Kantorowicz and more recently re-appraised by Jacques Juillard and other historians: the natural and consequently mortal one, and the one given over to political sacredness, no longer correspondent to royal absolutism but to that of the Republic.

Going beyond modernism. History of concepts and epochal change
In the debate in recent years it has often been suggested that historic and social disciplines might free themselves from the traditional modes of categorisation inherited from the modern world, and learn to look at the problems of the present in a new light. In view of its capacity to contextualize epochs, the history of concepts may turn out to be an essential aid in this attempt to address this self-induced issue of categorisation. The essay questions the various methodological models that have been brought into play up to now, taking as its starting point the recent text Sui concetti giuridici e politici della Costituzione dell’Europa (On the juridical and political concepts of the European Constitution), edited by S. Chignola and G. Duso.

Between public and private. Personal writings, sentimental attachments and political commitment
The article starts out by suggesting a historiographical review of the relationships between family affections, friend and gender networks and political commitment in the Twentieth century. Particular attention is dedicated to that branch of studies that chooses the biographical approach and stresses the importance of personal archives as a source of documentation. In the second part, a new «case study» is presented related to the life of Camillo Berneri and his family during his French exile, that took place in the years between the two wars.