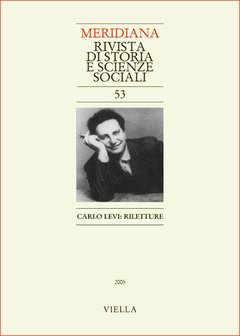 Re-reading Carlo Levi
The essay offers an interpretation of Levi’s political and intellectual biography, taking account of his earlier works and of the critical literature. Today Levi attracts interest more as the antifascist, libertarian author of Paura della libertà and of L’Orologio rather than as the brilliant spokesman of Southern Italy. However, Cristo si è fermato a Eboli is the object of historic-biographical and anthropological analyses based on writing culture that see it as an ethnographic monograph. Recently the complex Levi’s world, has been popularized by the media and has captured wide attention. In such context, the description of Italy as it was (or supposed to be) in the ‘50s, before the cultural homologation produced by a devastating modernity, appears particularly relevant. Levi’s was able to bring into politics new languages and carried on in a peculiar manner the typical twentieth-century ambitions of engagés intellectuals. He deserves a new, ideology-free re-reading.

Outside politics, against religion: «Fear of Freedom»
Carlo Levi’s political thought – along with its well recognized and official views – always showed a strong libertarian surge, together with a radical criticism levelled against politics and institutions. This essay tries to reconstruct the origins of this not well known stance. Levi’s theoretical development is focused, from Paura della libertà (1939, a hymnbook against every form of State and organized religion) to the political invectives of later years, against American imperialism and the birth of a new global power, maybe even worse than National-socialism.

On Carlo Levi’s Out-datedness
The author reconsiders the intense debate on Levi that took place in the postwar period and claims that, despite its extraordinary value, Cristo si è fermato a Eboli (1945) nowadays is a mere historic testimony. Owing to socio-cultural radical changes and to the fact that the «problem of the South of Italy» has been losing its peculiarities, Levi’s masterpiece should be regarded as an outdated book. Like Pasolini, Levi glorifies in the culture and anthropology of the ’50s where Italy retained pre-modern traits. However, Levi’s utopian and libertarian thought as developed in his works from Paura della libertà (1939) to Quaderno a cancelli (1974), may help ethnic minorities to tackle present-day cultural homologation.

Carlo Levi as an iconoclast Painter
Levi’s biography as a painter is illustrated from the point of view of the pictorial poetics expressed in Paura della pittura (1942). In this essay the relationship between freedom, fear and painting is investigated in dispute with avant-garde movements of the XX century, that Levi himself considered as mere mirror of idolatrous times. Such interpretation is based on some typical aspects of Jewish culture: individualism and iconoclasm. This leads to identify several «periods» in Levi’s wide pictorial production, each characterized by discontinuity and persistence: an early period in Turin, a «Parisian period», a «political confinement period » and a «post- second war social realistic period».

The world of Carlo Levi: images of a transformation
Bianca Arcangeli interviews Antonio Pagnotta
Antonio Pagnotta expounds his photographic work in the small towns were Cristo si è fermato a Eboli is set and his encounters with the offspring of the characters of Levi’s fundamental post-war book. Pagnotta also tells how his earlier training as a photographer performing in Europe and Japan was muddled up by the direct and lively communication with people living in those Southern small towns. As much intense was his discovery of Levi’s culture and of the ancient world. His photographic work captures this world in its persistence and transformations.

Danilo Dolci and Carlo Levi.The relationship between two Northerners of the South of Italy.
Danilo Dolci – writer, sociologist, educator, and poet – engaged himself in an absolutely idiosyncratic way to face and solve the problems of Western Sicily, a territory marked by socio-economic underdevelopment and by the presence of criminal organisations. For many decades, associations, groups and movements, both in Italy and outside, referred to his activity, based on non-violent methods and on the so-called «popular self-analysis». In spite of their differences, Levi and Dolci cooperated very closely thanks to a mutual feeling of esteem and their common love for that beautiful and tormented land. Levi repeatedly visited Sicily, taking part in the various activities promoted by the «Centro Studi e Iniziative» and also acting as an influential witness in the several trials that Dolci had to stand.

Discussing autonomy, from Carlo Levi to our days
Historians and exponents of the cultural and political world of the South of Italy discuss a category central to Levi’s weltanshaung and to his political and intellectual biography: autonomy. The political origins of the concept go back to the XIX century federalist, liberalist and anti-politics ideas, and to the «question of Southern Italy». Autonomy permeates Gobetti’s thought, who initiated Levi into politics. Autonomy is viewed also as a radical philosophy of liberty as well as an existential and psychological trait. The possibility of self-government in Southern Italy, in the light both of federalism and of a rearrangement of identities, is also debated. Levi’s legacy is important here both as specific memory of the confinement setting and to contrast the homologation of Southern society induced by modernization.

/7Persistence and transformations in the «montagna materana» area. Economic development and regional planning
After a period of rapid economic growth in the second half of the ’90s, the Italian southern Region of Basilicata is now stagnating. The paper focus on the upland areas around Matera (Montagna Materana), whose marginality bas been exacerbated by the peripheral character of economic development in Basilicata. The Montagna Materana// is characterized by the persistence of old traits and elements of transformation, introduced mainly by local social actors. The paper provides an analysis of the dynamics of local development on the basis of a comparative study of various local planning initiatives, stressing the role of human capital. In this light the authors suggest that a local training agreement (Patto Formativo Locale) should be stipulated.

The non-performed Christ. Some notes on the cinematographic image of Lucania
The image of Lucania showed in the movies throughout the decades has not been as rich as other Southern Italy place, let’s say Sicily or Naples. This essay presents a series of «failed encounters» that cinema has had with Lucania in the past, focusing particularly on various unsuccessful adaptations from Levi’s Cristo si è fermato a Eboli in the Fifties. The author examines the influence that anthropologists like Ernesto De Martino had on the imagery of Italian movies set in Lucania. In the 60s and 70s Lucania became rather a «blank space», where directors projected their political and utopian fantasies. Nowadays this country is particularly used as a metaphor of whole Southern Italy and of (cultural more than social) «dualism» between Northern and Southern Italy.