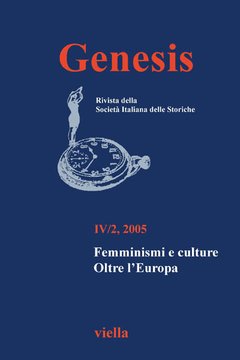 The Political Participation of South African Women: Gender Policies and the Feminist Discourse
Since 1994, the political participation of South African women in the new democratic institutions has constantly increased. Moreover, a National Gender Machinery has been set up to monitor and implement gender equity policies in the country. Nevertheless, this progressive institutional changes towards the empowerment of women have not been followed by a substantial change in the lives of South African women. This essay has the aim to analyse the history and the patterns of the political participation of women starting from their involvement in the anti-apartheid movement in the light of the debate on South African feminism and of the current criticism towards the gender approach. In the country’ democratic experience the feminist discourse has been left out for the gender theory, which has been used as methodological tool, as a framework for state policies and as an institutional mechanism. This has, in the author’s opinion, brought to the development of specific women’s rights but, at the same time, has set a limit to further changes in the patriarchal structure of South African societies.

Feminist practices and discourses in Latin America: the experience of the Encuentros
The essay explores the history of feminist debates and practices in Latin America over the last 30 years, by focusing on the main issues discussed by the Encuentros feministas latinoamericanos y delCaribe. It argues that the Latin American feminist experience is characterized by a radical critique of what has been defined as “universalist and ethnocentric feminism.” By analyzing several case-studies (such as the stories of indigenous and chicana women in Mexico, the experience of negras women in Brazil, and women’s participation at the Beijing Conference), the essay highlights the ways in which class, “race” and sexuality intersect and influence feminist practices, as well as the interaction between women and feminists.

A century of feminism in Iran: transformation, strategies and development
Iranian women’s movement and feminism have indigenous root which go back to mid XIX century. Women in Iran have been fighting for their rights either by organizing themselves in militant demonstrations or by adopting a subtle but persistent resistance and rebellion. The present paper, after tracing a short history of women’s movement in Iran, attempts to place current feminist activities and discourse in the mainstream of the tumultuous cultural life of post-revolutionary Iran. It also examines the ways Iranian women are empowering themselves through the carving out of public spaces in the theocratic Islamic Republic of Iran.

China: sex education and gender difference
Since the late 1980s sex education has been widely promoted in the People’s Republic of China and, particularly in urban areas, is becoming an important aspect of young people’s education. Physical and psychological development, personal hygiene, sexual desire, homosexuality, premarital sex, teenage pregnancy and venereal diseases are only some of the themes discussed in the classrooms. Sex education textbooks establish parameters, standards of behaviour and principles of sexual morality to “guide” young people’s sexual and gender development. Boys and girls are asked to conform to these parameters in order to complete their development as strong and healthy citizens of the future. This study proposes a gendered analysis of formal sex education materials recently published in China. In particular, it points out that educational messages present evident gender imbalances and represent standards of morality and responsibility which vary according to gender.

Portrait of Arcadia in a salon: the unknown and worthy duchess of Limatola
Aurelia D’Este, duchess of Limatola, is one of the many disciples of Arcadia – the first Italian Academy to accept women – about whom very little is known. It is almost impossibile to reconstruct her literary talents, since none of her writings (neither the Latin verses that allowed her to become part of the Academy, nor her unpublished Cartesian sonets) have survived. Her philosophy teacher was Paolo Mattia Doria, an aristocrat from Genoa with whom Aurelia established a “loving friendship” similar to that which bound together Saint Évremond and the duchess of Mazzarino. Aurelia’s salon in Naples gave birth to the Ragionamenti ne’ quali si dimostra che la donna, in quasi che tutte le virtù più grandi, non essere all’uomo inferiore (Treaty in which it is demonstrated that women, in almost all the most important virtues, are not inferior to men). Published by Doria in 1716, the book constitutes one of the most radical pieces of literature about women, and about the importance of conversation as a tool of education and mediation. In a context characterized by profound ideological and political divisions, Aurelia’s salon calmed personal rivalries and encouraged people to continue writing.