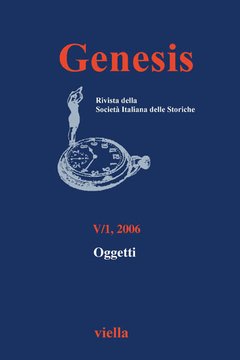 Objects and bondes in the homes of courtesans: erotism and social distinction in seventeenth-century Rome
The importance of the role played by furnishings in the creation of a luxurious and erotic mise-en-scene in the homes of the courtesans was already a literary and visual topos in the early decades of the sixteenth-century. This article starts with a discussion of the way in which the material culture of their domestic interiors is used in these texts to articulate ambiguities and ambivalences about courtesans, especially issues pertaining to the relationships between courtesans, prostitutes and their clients. It then moves on to explore the domestic goods owned by prostitutes and courtesans in seventeenth- century Rome, and the relationships between objects, courtesans and their clients, as revealed in the legal and judicial documents of the period. Furniture facilitated the kind of group sociability around courtesans which was popular at the time, and contributed to the creation of an erotic ambiance, as well as signalling the status of the clients as much as of the women. Despite this, the author suggests that it would be mistaken to believe that these objects articulated a particularly “female” aesthetic and that on the contrary, certain objects were clearly linked to the world of men, connoting a certain gender ambiguity and thereby neutralizing a space which was otherwise perceived as being too “female” and therefore too dangerous for men.

A society to reveal. The underwear consumption in Renaissance Naples
The essay focuses on the underwear consumption of the Aristocracy in Renaissance Naples. The research is based on unpublished documents collected from the Filangeri’s Private Archive of Naples: 120 items shared equally between post mortem inventories and the lists of trousseau. The essay has been developed in three stages: the first one has compared the luxurious underwear with the European portraits in order to visualize the garments and, subsequently, to verify their employ; the second stage of our study has proposed to recognize the symbolic function of the underwear spotlighting the gender differences; finally the third one has reconstructed some economic feature of the underwear consumption focusing on the level of the household expenditure and the role of the female in the organization and administration of the family wardrobe.

Objects and gifts as examples of 18th century good manners
The sources for this essay are to be found in a private archive of correspondence dating back to the period 1819-1878. These letters, all written by women, are housed at Empoli (in the province of Florence), and belonged to Vincenzo and Antonio Salvagnoli Marchetti, politicians close to Bettino Ricasoli. This was an age of limited financial resources, and the living conditions account for the widespread importance attributed to objects. During the eighteenth century, however, women became the central figures in families and in their homes. The control that they began to exercise in these areas, initially for economic purposes, led to a development of aesthetic taste, in their care for decoration. A special place among the cult-objects was dedicated to portraits, which were not just a part of the furnishings: their supply and demand aroused constant interest, and they became active factors of socialisation. Research reveals that the small objects exchanged in social contacts were countless: a female leadership emerged in the romantic good manners responsible for chosing – or, indeed, often for constructing – the objects, and for the addition of discreet descriptions, which thus opened the way to dialogue. This female behaviour was to be found at different social levels, and contributed in some measure to the formation of contemporary society.

«The most famous and old bag» or midwife’s capital (XIXXX cent.)
The essay explores – in historical perspective – functions, tools and contents of midwives’ bag, material and immaterial capital for a midwife. Mirror of the conflict between midwives and physicians, bag can tell about the complex contest between professional and non professional midwives and about the complicated relation with Church because of some particular tasks of midwives, especially the possibility to christening newborn. Since the end of XIX century, when obstetric district were instituted, midwives’ bag acquired an unusual importance. Examining the few tools allowed is possible to analyze even the few practices lawful to midwives. In the same time the unofficial equipment inside the bag explains how midwives still played a rich variety of roles in Italian society and how this variety overflowed the narrow confines of the professional category.

Mrs. Candy and her Washing Machine. A Perfect “Love Story” in the Sixties Italy
In 1958 the first completely automatic Italian washing machine was born. It began therefore also in Italy the so-called “laundry revolution”: in 1965, the 23% of the domestic customers would have owned a washingmachine and to the end of the decade the percentage would have grazed the 42%. The spread of the washing machine promoted a mechanization and rationalization of the domestic job with ambiguous gender implications. Press and television advertised it as the advent of a new women’s “liberation”. From the advertising to the specialized press, from the mail columns to the inquiries of the feminine reviews, passing for the reflections of architects and designer, the promotional language seemed to be united in a choral praise of the domestic appliance, and as well as more of the washingmachine, as a factor of “progress” and “freedom”, in the society and in the daily women’s routine. But what did “progress” mean? How women had to use the “freed” time? Under the same words key, in reality, we can find different models of femininity and different interpretations of the connection between domestic life and society, private and public sphere. Such variety in the promotional language makes us to reflect on the ambivalence of the same object of consumption, bearer of a change whose nature and whose outcomes not only depend on its intrinsic characteristics, but also on the interaction with the subject who use it and on the social and cultural context in which such “dialogue” it happens.