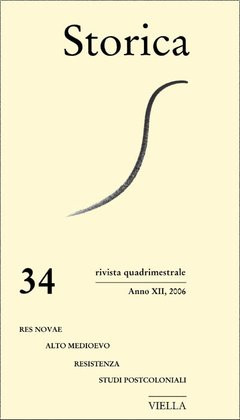 «Leaving the ancient». Innovation and change in ancient Rome
Mistrust of innovation and refusal to change are attitudes generally ascribed to ancient civilizations and in particular to ancient Rome. Although this widespread representation is confirmed by literary and historical sources, a deeper analysis of the philosophical thought and language related to the topic of novelty, as well as the evidence of some significant episodes, reveals instead a variety of attitudes. The conflict between the new and the ancient discloses diverse representations, which range from definite refusal to broadmindness. In any case, the degree of assimilation of innovation appears related in the first place to the possibility of linking it to tradition and of showing continuity with the ancient.

«American Indians» This article analyses the ascending intellectual route of the Indian Subaltern Studies Group within the Anglo- American academia, from the project of producing a radical historiography about peasant revolts in colonial India to the critique of the epistemological foundations of western historical thought. The articles emphasizes the influence of Maoism both as a political experience and as a social theory, and the strategic meaning of several methodological turns undertaken by these Indian scholars in order to locate their work within the debate on postcolonialism.

Memory and public history: Resistance in Italy and in France
This essay compares Italy and France concerning the modes, the unrolling and the themes of the construction of a national memory of the Resistance and, in general, of the Second World War. The former touches upon issues such as public monuments, memorials, public writing, literature and cinema about the Resistance, festivals, militant historiography, museums, institutions and research centres aiming at the reconstruction and circulation of the history and memory of the Resistance. Although the years 1944-47 appear similar in the two cases, due to the spreading activity of the parties born out of the Resistance, in France the Gaullist and Communist party, and, in Italy, the parties and governments emerged from the Cln (National Liberation Front), in the following years the paths taken diverged in a remarkable way.

Economy and society in the European Early Middle Ages. A discussion on Framing the Early Middle Ages by Chris Wickham
We publish a roundtable discussion on Chris Wickham’s latest book (Framing the Early Middle Ages. Europe and Mediterranean, 400-800, Cup, Cambridge 2005, pp. XXVIII- 990), in which scholars of different disciplines (archaeologists, ancient historians and medievalists) discuss this book of great conceptual and analytical importance. Wickham builds on his and other scholars’ research to propose a new and encompassing framework for the «great transformation» occurred between 400 and 800 in a large number of regions in Europe and the Mediterranean formerly part (or neighbours) of the dismantling Roman empire. The debate is followed by Wickham’s reply to the questions and critiques raised by the commentators.