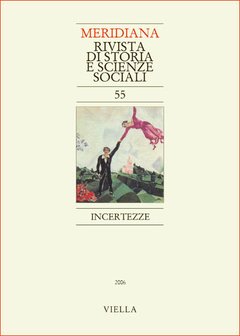 The certainty of uncertainty. Ambivalences and remedies
The article deals with the meanings of uncertainty within a changing world. Since ever people have to face it, but changes affect the different shape of contraints and opportunities that every one experiences. The authors reconstruct the various definitions of risk and uncertainty within the prevailing social sciences approaches. So, instead of assuming a simple view that opposes a sure past to an uncertain present and in order to understand what is changing and how people do perceive the transformations of every day life, we need to look for local configurations of uncertainty, dealing with the varying rhythm of human experiences, the reversibility of choices and the range of perceptions that people experience under different conditions more or less extreme.

Creating a family without certainties
The article presents a consideration on the consequences that the lack of economic security, caused by a temporary and not protected job, produces on the choices to create a family, to have children for young couples. Considering the job pattern, the research shows how the majority of works done by the interviewed people presents standard organizational and professional outlines (tasks, working-hours, place, group of colleagues). Moreover, for a small part of the interviewed people, the job course costituted by more atipical or irregular job implies vertical labour mobility rising to more qualified and protected positions, whereas the majority manteins the same positions (qualified or not qualified) in the labour market that they had at the beginning. Eventually there are strong social and gender inequalities, considering the qualification level, the congruence between degree of study and job-task, the salary and the career perspectives. The development of a non standard job conditions more the forming of a couple and the birth of a child for educated youngsters and people from the upper class, than for those who are less educated and disadvantaged, because they have different values and lower job ambitions. The family welfare, visible in a continuos flow of money and sevice help gives youngsters the possibilities to get the emotional security of the couple, but this is not enough in order to become parents, which happens always later and always less. Indeed, this is hindered by the low salary levels of young couples and by the labour uncertainty.In general, there is a reduction trend for the aspirations of young couples and a too strong persistence of family ties and conditioning. All this conflicts with the principles of freedom, wealth, meritocracy which the advanced societies are based on.

Surviving under chronic uncertainty in Naples
This article seeks to analyse the strategies that Neapolitan families adopt when faced with poverty, using the results of a research project involving a sample of 345 poor households in Naples that comprise at least two cohabiting family groups. The Neapolitan case is explored in relation to the more general processes involving increasing levels of uncertainty and precarious work that characterise the current transition from the Fordist organisation of production and society to new forms of social reproduction.

Social vulnerability and daily uncertainty. Women in single-income families in Turin
The article describes the main findings of a qualitative research focused on women at the same time wives and mothers in «one income» families, living in Turin. The analysis is centred on their representations and experiences of vulnerability and explores their feelings of uncertainty. Unexpectedly, these women do not seem either to feel exposed to new risks, or perceive a greater insecurity regarding the future. They define their own situation as economic deprivation and represent their existence in terms of hard work and sacrifices, but the social and economic transformations in action, responsibles for a greater precariety of their families, is not a topic of discussion. The uncertainty they live is related to the difficulties to satisfy the needs of their families and the requests of their children: their uncertainty is therefore daily and ordinary.

Living with fear: everyday life in a theater of war
Recent evolutions of state violence, war on terror and ethnic violence involve the everyday life. We address the question why fear, in a society featured by an intractable conflict, become a collective emotional orientation. Fear reflect, dominate, reshape and reinforce the structure of power relation. The Israeli-Palestinian conflict represent a good example, we refers to this case study to analyse the repertoire of denial that build the structure of social action, nourish by beliefs, attitudes, emotions and shape collective memories, social identity and collective orientation. Here the phenomenological approach to study everyday life helps to reveal the hidden meanings of social action. The geographies of fear trace unusual frontiers, set what can be done, include and exclude people in new and sometimes paradoxical ways that affects dramatically the everyday life.

Drosofila and other stories: meeting normality with certainty
Discussing the prevailing meanings of normality implies leaving certainty apart and concentrating on those meanings that become prevailing across time and space. The settlement of this question has immediate effects on how people regard themselves and are considered from others. The article deals with the discussion about the social construction of this evanescent concept, trying to define some of the consequences that arise within different societies when normality and abnormality become strictly normed. At the macro level, normalization processes meet with rationalization processes, producing unexpected consequences.

Arriving early. Childhood and head-start policies
What is the meaning, and what are the possible consequences, of the emerging tendency in public policies aimed at children to encourage an «early start». These questions arise against a background of recent normative changes, through which the adult world and children’s world come into closer contact, and which promote greater responsibility on the part of adults and greater autonomy on the part of children. An analysis of the theoretical and practical implications of this process, observed within the area of policies for the protection and education of children, points to much ambivalence and suggests the need for instruments to control, accompany, and if necessary reverse the logic of early start.

Speed/slowness
As a result of a mainly «ideological» approach, we tend to consider progress and conservatism as two alternative and incompatible dimensions. The same for «slow» and «fast». My main point is that on the contrary both dimensions are crucial. It is argued here that they intersect in personal life as well as in social processes and that this is to be seen as the «rythm» of human experience. The paper also addresses the issue of how the two elements are combined (and re-combined) in the various stages of the life course (not necessarily following traditionally established rules) and aims at describing the different patterns as they are to be found in women and men.

Choice reversibility in a ltd (responsible) society
In the «risk society» people often attempts to reduce risks and responsibility by making reversible, temporary, choices: flexible employment, eclectic consumptions, but also temporary love relationships, religious feelings no more or weakly dependent on religious institutions. Low commitment can be bound by broken promises, that cause lack of reliance. Assuming responsibility, there are several dilemmas in communication and relationship strategies.

Swedish Socialdemocracy in the European Union: the debate on full employment and Welfare
In 1990-1991 the Swedish Social Democratic Labour Party (SAP) achieved two historical turning-points: the sudden «conversion» to Europeanism, after decades of steady opposition to the project of a continental political unification, and the giving up of the priority attached over a long time to the aim of full employment, now subordinated to the fight against inflation. The article is intended to deepen: the new economic policy applied by the SAP in the 1990s; the debate on Welfare State and the changes within it (particularly the pensions reform); the split as to the Swedish membership in European Union, not only between the SAP, on one side, and the Green Party and the Left Party (both allies of the Social Democratic one, but against UE), on the other side, but also within the SAP itself and the union. The conclusions are devoted to a short analysis of the political elections in 2006.