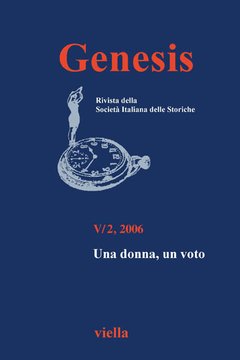 Citizens without Citizenship: Women’s Activism during the Plebiscites of the Risorgimento (1848-1870)
The plebiscites of the Risorgimento, based on universal male suffrage, represented for Italian women the first form of political-electoral apprentissage. Women participated in a variety of extra-legal and, in some cases semiofficial, ways. The essay aims at analyzing the practices and languages associated with women’s activism (such as addresses, subscriptions, demonstrations, parades, the creation of separate polls and the breaking into official polls, «stolen suffrages», worthy female citizens’ exceptional votes, patriotic donations), which were often accompanied by various forms of mobilization carried out by minors. Women’s activism should be understood within the framework of “universal content” and “national festival” which was typical of the definition of the plebiscite vote as non deliberative and unanimistic. Furthermore, the essay argues that the fact that plebiscites were conceived of as symbols of national unification led female patriots to perceive the wrongfulness of their exclusion from suffrage. This in turn contributed to the shaping of their activism as a collective expression of belonging to the nation and a symbolic act of citizenship, and to place an emphasis at times on patriotic harmony, at other times on emancipation.

The 1919 Campaign for Suffrage: the Rise and Fall of «Voce Nuova»
In the aftermath of World War I, the Italian feminist movement carried out one of its most aggressive and determined fights for the recognition of suffrage and civil rights. The women’s movement had been for the most part interventionist, and after the war it aimed at gaining advantages from its involvement in the war propaganda and the relief efforts. In 1919 the main associations active in Milan pursued an ambitious editorial project: they founded a feminist and political weekly, «Voce Nuova», whose main aim was to achieve the recognition of women’s right to vote. However, the attempt to act as protagonists in the electoral campaign led the group associated with «Voce Nuova» to increasingly emphasize the relevance of nationalist and corporativist issues.

Devoted to Obedience: Exemplary Stories of Catholic Leaders
The essay reconstructs the political thinking and activities of two relevant members of the women’s Catholic movement, who were particularly concerned with the issue of women’s political participation: countess Elena da Persico (1869-1948) and Elsa Conci (1895-1965). The former was for years opposed to women’s suffrage on the basis of the doctrine of separate spheres and of a strict opposition to modernity. Da Persico was convinced that Catholic women should play an important role by pursuing an organic form of social activism, whose main aim was to achieve the nation’s “Christian restoration”. Starting in 1917, she founded a new religious association called the Figlie della Regina degli Apostoli, which constituted the first female secular institution to be recognized by the Church and which led to the emergence of one of the Christian-Democratic members of the Constituent Assembly: Elsa Conci. When women’s vote was introduced in 1946, opposition to political participation shifted to the question of women’s passive electorate, which was accepted for “some” in the name of everyone’s benefit.

Governing without Rights: the Paradoxes of the French Popular Front
It was only with a decree introduced on April 21, 1944 that French women obtained equal political rights. Nevertheless, in 1936 the president of the Socialist city council, Léon Blum, assigned three women a role in the government. These two events are peculiar, and they occupy a particular role in French women’s history. They raise the issue of the reasons behind these nominations, as well as the reasons for “French lateness”. Most importantly, they allows us to investigate the ambivalence of a man, a party, and a society faced with women’s vote and access to power.

Women’s Entrance into Politics: a Comparison between France and Italy
This essay compares Italian and French historiographical interpretations of the Second World War. At the same time, it presents the various arguments advanced by historians or political scientists about women’s political integration inside the nation, and then attempts to link the political issue of women to the long-going clash between the Church and secularism. The comparison between Italy and France highlights the influence of the Communist Parties and, even more importantly, of the Catholic Church.

Political Schooling: the Spaces and Modalities of Women’s Political Education in the DC and the PCI
The essay reconstructs the various activities that were carried out by the Christian Democratic Party (DC) and the Italian Communist Party (PCI) to provide women with a political education, at a time when women were about to exercise their full citizenship with the vote. It focuses in particular on the DC’s Women’s Movement and on the female central schools set up by the PCI, and takes into account the years between 1944 and 1953, when a new phase of Italian Republican history began. The two parties, both of which relied on profoundly hierarchical structures, were characterized by deep differences in their formative and organizational decisions, which makes it hard to advance any comparative hypotheses. Common to both was an awareness of working towards the education of a female political class which, despite its ambiguities and contradictions, was to become one the main protagonists of modernization which, after the Constituent Assembly, involved Italian women and the country at large.

Women in Arms: Images and Representations in Italy, 1848-49
This article examines the women who claimed their citizenship right to carry (or demanded to carry) arms in the battles or barricades of the 1848-49 Italian revolutions. This subject is analyzed by using prints and caricatures from the time and comparing them to those of the French Revolution and the Jacobin Republics in Italy. The article explains how armed citizenship, claimed by many women patriots, was linked with the proclamation of equality between female and male nature, with oath, virile femininity and transvestism. The women’s requests challenged gender roles and destabilized the balances of power and the relationship between the sexes. Many men reacted by portraying these requests as ridiculous and used sexual parody to condemn them, showing femininity to be incompatible with a virtuous public sphere.

The pétroleuses: Women’s Bodies in Revolt
The essay examines the representation of women’s political activism and, more generally, of women’s bodies during the Franco-Prussian War and the Paris Commune (1870-1871). Through an analysis of caricatures, prints and paintings, it argues that conservatives as well as communards transformed women’s bodies into a site of struggle over the meaning of citizenship, national identity, patriotism and social changes. Indeed, the symbols associated with women’s bodies became crucial in defining competing political stances and in translating into images a series of complex ideas tied to political representation and citizenship. While the communards portrayed the Commune by focusing on the image of people’s armed struggle, they also emphasized women’s sexual vulnerability – symbolized by the Republic – to encourage their members to defend the French capital. The conservative press, on the other hand, focused its attention on armed women’s androgyny and sexual promiscuity in order to celebrate women’s role as mothers. In both cases, the forms of activism pursued by women during the Commune were largely erased. The essay devotes a particular attention to the analysis of the image of the pétroleuse, a working-class woman who was accused of setting the homes of the Parisian middle-classes on fire. It argues that these representations were crucial in establishing a link between women’s presence in the public sphere and the undermining of the social order.