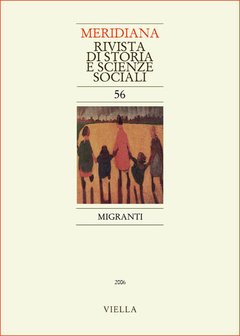 Like swallows in flight or bears in the forest? Migrants, foreigners, others
The purpose of the article is to present the essays collected in this number of the review, and some interpretations of the main issues emerging from the current debate, practices and policies on migration and migrants. The focus is first on the continuities and discontinuities between the past and present migratory movements, with reference to the most important analyses and researches. Then, the article deals with the identity and cultural diversity issues, and offers some criticism of the debate on multiculturalism. The conclusions discuss those policies which tend to consider and face the problems related to the migrants’ regulation and integration following a purely security logic.

Migrant identities
In the contemporary rethorics of political communications the concept of «culture» is often used in the same way the old concept of «race» was used in the last centuries. We have a racism without race. There is a rising of cultural fundamentalism, and the cultures are seen as solid entities, who cannot communicate, becoause of their difference. As Regis Debray said, while the objects are globalising, the men are tribalizing.

The Workers, the Migrants, and the Revolution. Detroit and Turin: a comparative hypothesis (1967-73)
This article examines in a comparative perspective labour migration and workers’ struggle in Detroit and Turin at the end of the Sixties. These two cases are well-known for the extent of radical protest that hit the automobile plants in that period, but they have never been studied in connection. While national studies highlighted in the Turin case issues of class and in the Detroit case issues of race, the comparative analysis focuses on the fact that in both cases the catalyst for a prolong period of industrial conflict were migrants. The article enquires into the motives for the shopfloor conflict and finds them well linked to the problems related to the quick urban change that ensued immigration and to the migrants’ quest for first class citizenship in the new context.

Spain and Italy: stranger as metaphor of political incertainties
The paper developes a reflection on the political construction of immigration matter in recent societies of immigration. It compares on this thema antipolitical politicization process in Italy (by the Berlusconi coalition) and hyperpolitical politicization process in Spain (by the Aznar government): the «securitization» interpretation appears as the result of specific political opportunities and of specific discursive opportunities, managed by nationalist and neopopulist actors. In the two cases, this exclusive polity is a dead end: the utilitarian interpretation of immigration comes as a way out, to make collective interests government possible.

From models to practices of immigrants’ integration. Convergence or divergence?
Research on immigrants integration has been traditionally dominated by the debate over national citizenship models. Yet, recent studies have pointed out the relevance of local policies in providing crucial resources for immigrants integration in the host society. A growing body of literature on city policies is emerging, according to which local administrations are usually more prone to accommodate diversity in a pragmatic way. Thus cities represent favourable contexts for the developing of forms of soft multiculturalism. The article discusses this thesis from a critical point of view. Actually, evidence provided by the literature is contradictory, since local governments have also to face with non positive attitudes towards foreigners in their local electorate. Research studies on Italian cities show different patterns of integration policy, characterised by various degrees of openness/closure towards immigrants. A certain convergence is actually produced at the level of everyday practices, since civil servants and third sector organisations have to cope with ordinary problems of service delivery to a culturally diverse clientele.

Getting lost and finding oneself into translation
This paper deals with the issue of translation as metaphor of postcolonial era, i.e. an era shaped by globalization processes and large migration movements. These processes press for, mostly impose, a sort of «second socialization» which firstly involves people who migrate. However, those unavoidable intercultural relations will never be properly as such if this second socialization does not cross also «us», the natives, the inhabitants of those countries which receive migrants. The mutual translation among different languages and cultures plays a preponderant role in the current world. Starting from Walter Benjamin, this paper, in the first part, goes trough some theoretical dimensions of the concept of translation which bring to argue that not everything is translatable and «that particular convergence» which, according to Benjamin, characterizes translation is not always easy to achieve. In the second part, the paper presents Fatema Mernissi’s exemplary narrative reflection which some how stages a translation process, by contrasting male fantasies, «eastern» and «western», and the different social constructions of harem.

Clandestine migrants in Lampedusa: isolated, segregated, invisible
Social construction processes of migrant, often clandestine migrant, among the inhabitants of Lampedusa, have recorded, in the last years, a gradual moving from a prevaling sympathetic optics combined with human solidarity forms – even if not without defensive processes and forms of racism and xenophobia – to more and more clear dynamics of exclusion. The social representation of the stranger isn’t, however, either unvarying or coherent. Infact, the collected interviews give evidence for continuous oscillations between the wish to understand – that increases when there is an interaction with the strangers – and the need to defend, even with reactions of violence and exclusion, the poor privileges and the small eeconomic resouces (especially tourism). This situation often produce deep contradictions between ethical instances and economic necessity. Lampedusa’s inhabitans witnesses offer an evocative representation of these conflicts and help to show the migrants condiction, characterized by silence, invisibility thath often hide exclusion and ignorance of the elementary human rights.

Second generations in a Turin school: the social construction of scholastic success
Foreign pupils in Italian school constitute a structural, increasing presence. Their outcomes are the result of a multidimensional process, influenced by several individual and social factors. Not only the family migratory project and the different conceptions of scholastic education, but also didactics, assessment techniques, gender and expectations of adolescents and teachers must be considered in order to explain the immigrant students’ results. The case study shows how a secondary school in Turin tries to avoid the «ghettoization» by intercultural programs, cooperation with other educational agencies, strict criterions to pass the students. The fifteen-years-old pupils with lower sociocultural status can obtain prestige in the peer group by a kind of opposing culture, but often drop out of the school and lose the opportunity of upward social mobility.

Italians in Germany: a complex migration story
The article paints a picture of the italian migration to Germany. With a chronological focus it’s identified three historical phases: the first one takes place before the First World War; the second during the Nazism regime; the third and maybe most significant one after the Second World War, in the fordism age, which is characterised in Germany by a hefty economic growth and by the requirements of unskilled foreign manpower. The second part of the article presents some statistical data about the present situation of the italian migrants in Germany. Two issues are tried to be pointed out: 1) Italians are still signed by a high unemployment rate and law educational level. This issue is related to the fact that they moved frequently between the two countries, and so many second generation Italian migrants have difficulties to develop long-term migration projects and were not faar-seeing in job searching. 2) Italians show a high entrepreneurship rate, with a remarkable concentration in the field of gastronomy.

On the ‘capability to flourish’. Richness, well-being and freedom in the capability approach and beyond
The paper starts with an overview on the contemporary debate on well-being and with a comparison between the two most prominent approaches to this issue, happiness theories and capability approach. It then assumes the latter as its theoretical framework and develops both its meta-ethical (or methodological) and ethical implications respectively through an inquiry into CA’s informational basis and its ideas of public reasoning and rationality. This twofold analysis also leads to highlight the CA’s re-definition and broadening of the concept of well-being and its rejection of the notion of happiness (typical of mainstream economics) in favour of the more ancient (and complex) idea of human flourishing. The paper then develops an inquiry into the Aristotelian roots of Sen’s and Nussbaum’s idea of «human flourishing» and connects the latter with the notions of capability, freedom and self-realization. Finally the last section develops the philosophical anthropology underlying the CA and highlights the notion of human richness at the core of CA’s idea of personhood.

«Beat is to live, inserted is to die». Epos of the beat generation in Italy (1965-67)
Our story begins in 1965, when for the first time some long haired boys made their strange apparition in Piazza di Spagna in Rome. This phenomenon firstly appeared in the interlands of Italian metropolis and it was one of the first, certainly one of the most original forms of «collective subjects in motion» and of the generation rebellion in Italy. The first number of the most famous beat review «Mondo Beat» came out in Milan, in the last months of 1966. In the same period some curious political experiments were made and there were many protests. From many prefectures of the North of Italy there were many informations about the birth of «Provos» Groups and of Beat tabloids all over Italy. The term «ad quem» is the 1967 idest the moment in which, after the Milanese experience of the Beat camping in Ripamonti street, the movement disappeared and the students movement came out.