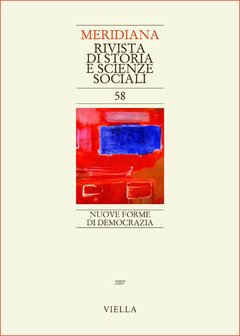 Introduction. In search of the missing link.
Representative democracy is going through a time of deep difficulties. As in past similar situations there are many attempts at updating it so to get out of a permanent legitimization and functionality crisis. In the last thirty years the predominant movement has been towards a stronger role for authority however the resulting mix of market, technocracy and populism, more or less media based, is increasingly unpopular. The time seems ripe for a re-evaluation of the demos. Are we in the wake of another disillusionment or things are really changing?

Citizens’ involvement in public policy-making
The article presents an overall picture of the most important and innovative participatory practices around the world. Such experiences are analyzed according to three features: 1) how issues are chosen and agenda is set; 2) how participants are selected; 3) which methods are used to favour the interaction among them. The article concludes by depicting two contrasting models of citizens’ participation: the «pressure» and the «dialogical» model. We argue that the distinction between the two models broadly corresponds to the distinction between «participatory» and «deliberative» democracy.

The masks of representation. La démocratie de proximité and participatory systems in selected french cities
The 2002 act on the «democracy of proximity» in France has renovated the interest of scholars and local policy-makers around participatory mechanisms. As a consequence, a large number of municipalities are experimenting neighbourhood councils, consultative assemblies and inclusive problem-solving practices. The article is focused on the implications of these new mechanisms on local democracy and evaluates their effects on a decision-making process traditionally based on the centrality of political representation. It argues that far from being an expression of democratic innovation, such experiments are but an attempt by local leaders to recover from a (perceived) decrement of legitimacy through the offer of a «new» version of their role.

Outsourcing in the factory of democracy: notes about participation in Morocco
This articles investigates some political meanings of the participatory dynamics introduced in Morocco by the launch of the National Initiative for Human Development in 2005. The participatory mechanisms introduced are coherent with the mainstream discourse on development and democratization. The strategy proposed to observe their very political implications starts from a distinction between the participation as a technique invoked by the development discourse, and the participation as a practice that interacts with wider socio-political conditions of the political arena. First, participatory mechanisms are observed focusing on their instrumental and procedural characteristics. Then, they are put in relation with some patterns of the government style that characterizes their implementation.

Political engagement and public space
On the one hand, the crisis of representative democracy is a constant refrain in the public opinion as well as among social scientists. On the other hand, there is a widespread reference to political participation, participatory democracy, deliberative practices, and also to new instruments of political involvement such as e.g. the participatory budget adopted in many cities. The aim of the article is to focus on the relation between political representation and participation, arguing that, beyond the theoretical debate, what is emerging in the public space today is a variety of new forms of political engagement, the renovated activism of associations and groups, and new ways of conceiving political expertise

The rural action by Opera nazionale combattenti during the first and second postwar period. Research perpectives and initial results
The first aim of the article is to show the results got by Inspector in Sicily of «Opera Nazionale Combattenti» on rural action. Besides, some investigation theses are also put forward. During post-war period, some land reforms took place with the aim of giving land to farmers. Moreover, in Italy, in 1919 some new farming methods and hydraulic reclamations were promoted by the Inspector. Thanks to «Opera Nazionale Combattenti», Sicily gave many opportunities to engineers, agriculturists, experts to try new farming methods. Unfortunately, this was one of the rootcauses of the failure of «Opera Nazionale Combattenti» action, confirmed by Fascism, which reduced the Inspector competence. Last period of post-war, the Institution was built up again without the previous steady technical basis; in fact any change, any action to promote the necessary reclamations was denied.

Kefalonia: the anamnesis of a tragedy
This paper analyses some witnesses’s accounts of nazist massacres committed in Cefalonia (Greece) by the Wehrmacht against the Italian military division «Acqui » in September 1943 (collected during a fieldwork performed between October 2003 and August 2004), with the aim of explaining some aspects about local memory construction’s ways and expression of the event. Special attention is given to the senses’s uses in the evoking and their relative narratives.